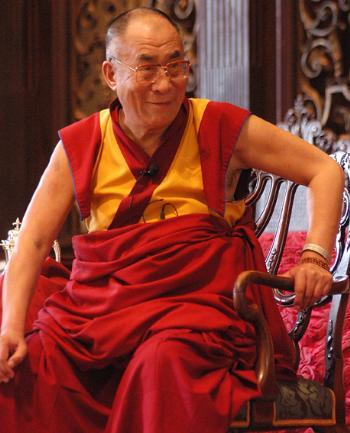 HIS HOLINESS THE DALAI LAMA spoke to a packed Memorial Hall yesterday, telling jokes and sharing his wisdom. Some students camped out over the weekend to get tickets for the talk.
By J. hale Russell, Crimson Staff Writer

His Holiness the Dalai Lama enlightened a packed Memorial Church crowd yesterday with jokes, childhood anecdotes, Buddhist lessons and an exhortation to develop moral character while at Harvard.

Insisting that he was “just a simple monk and a human being, no more, no less,” and dressed in red and saffron robes, the spiritual leader of Tibet used his 100-minute talk to emphasize the significance of compassion and altruism in creating happy, healthy lives.

At 4 p.m., the audience—many of whom had camped out last weekend to snag a ticket to the speech—rose as a group of Tibetan monks, Harvard administrators and security officers filed in around the Dalai Lama, who grinned at the crowd and chatted to a group of Tibetan musicians in their native language.

The Dalai Lama began by joking that he would pray for students’ academic success.

Interrupting the translator—his remarks alternated between English and Tibetan— the Dalai Lama quipped that his prayers would not actually be that helpful. “Hard work is better,” he said.

His emphasis was on creating happy and healthy lives.

“From birth, all have every right to have a happy life,” he said. “The main purpose of education is to bring happy and successful life at the individual, family…and even global level.”

But, he pointed out, education is not enough. Leaning forward and gesturing, his eyes widening behind his glasses, he reminded the audience that even those responsible for the Sept. 11 attacks had “very sharp brains.”

He warned that as students occupy themselves with sharpening their intellects, they may forget to simultaneously develop their moral character. But he encouraged students to develop an “altruistic attitude.” He said that this attitude would result in personal peace of mind and happiness.

The development of compassion, the Dalai Lama said, begins at birth.

“First we learn affection from our mother, not our guru,” he said. “Guru comes later. Everyone survived up to now because of…mothers’ affection.”

In a globalized, interdependent world, the Dalai Lama said, it is particularly important to nurture compassion. In response to one of the questions from the audience, which were submitted before the speech and read by Dean of the Faculty William C. Kirby, the Dalai Lama said that violence had little political use in today’s world.

He touched only briefly, in response to a question, on the difficult political situation in Tibet, saying that he still wants autonomy for the cultural and religious life of Tibetans. But he conceded that Chinese control had brought economic windfalls to the region and said he would support democratic rule if the Tibetan government were restored to power.

In addition to his role as the Tibetan spiritual leader, the Dalai Lama is the political head of the Tibetan Government-in-Exile, located in India, where he fled Chinese occupiers in 1959. In the intervening years, he has become internationally known for his commitment to nonviolence. He won the Nobel Peace Prize in 1989.

With self-deprecating jokes, the Dalai Lama elicited frequent laughs from the audience.

He told a story from when he was “a young, naughty Dalai Lama” and enviously watched his teacher feed and pet a parrot.

Hoping to attain the same kind of affection from the parrot, he grabbed some seeds to feed the bird.

“The parrot took very aggressively, and when I tried to touch, [he began] biting,” he explained. So the 10-year-old Dalai Lama took a small stick and hit the bird, he said, and the prospect of friendship between the Dalai Lama and the parrot was over.

Another questioner asked him to name his favorite movie. The Dalai Lama said he found most fiction films too violent, and that he preferred National Geographic and the Discovery Channel.

“The Dalai Lama is so fond of animal world, his next rebirth could be as animal,” he said a friend once teased him.

Students waited on line for hours this weekend—arriving in some cases as early as 1 a.m. on Friday, ten hours before tickets were to be distributed—to ensure that they would get to see the Dalai Lama.

The event sold out quickly.

The speech was simulcast in the Science Center and also broadcast live on the Harvard University Asia Center’s website.

Tenzin Dickyi ’06, who grew up hearing the Dalai Lama speak on religious occasions in Dharamsala, India, said the talk was appropriate for the largely student audience.

“It was very meaningful to have him there and stress that we need to be better human beings and not just brainy intellectuals,” she said. “We are always trying to improve our academics, but none of us think too much about being better persons.”

The Dalai Lama’s visit to Harvard is his first since 1995, when he spoke at the ARCO Forum. He was scheduled to speak in the Memorial Church last year, but his visit to the U.S. was scrapped because of health concerns. Earlier in the day yesterday, University President Lawrence H. Summers—who wore a white ceremonial scarf, or kata, draped over his neck—welcomed the Dalai Lama to the University.

Pusey Minister in the Memorial Church Peter J. Gomes introduced the Dalai Lama, joking that even at a place as old as Harvard, the Dalai Lama was “an even more ancient institution.”

Gomes turned the podium over to Kirby, who had initially invited the Dalai Lama in his former capacity as head of the Asia Center. Kirby called the Tibetan monk a “scholar and teacher who has received tenure in realms far beyond our control.”

The Dalai Lama is currently touring the U.S., and spoke Sunday in the Fleet Center to a packed crowd of nearly 15,000. He also attended a conference at MIT.

Today he heads to New York City, where he will conduct teachings and speak in Central Park.