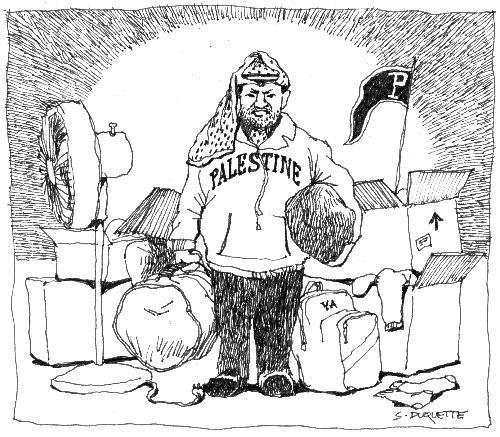 When I first offered to let Yasir Arafat stay with me in Old Quincy, I thought I was just doing the right thing. I have extra room in my suite, and he needs a place to crash now that Sharon is giving him the boot. But from the moment he came through the door he did nothing but complain.

A floater, he mistook himself for the first-year roommate from hell. You know, the one who moves in all of his stuff before you even get to Cambridge, and takes the better bed, closet, desk and drawers. It hardly mattered that I was here first.

The “Chairman,” as he insists on being called, knows the meaning of entitlement. He swore at me that there would be no peace unless I ceded him complete control of the mantle and three out of five of my dresser drawers. When I gave him the top two and bottommost drawers, he stormed away muttering about the viability of a non-contiguous arrangement.

I let him have the top three dresser-drawers, and I gave him the mantle, too. After all, his Nobel Peace Prize deserves it more than my CUE Guide. But still he wasn’t happy. Abu Mazen wanted his top bunk even though I’m four inches taller than him.

I laughed in his face about this demand. I sure as hell wasn’t going to bump my head on his bunk every morning. So his passive-aggressive attacks continued. He took long showers so that I couldn’t make it to class on time. He stole my toothpaste and used my toothbrush. He held raging keggers night after night. And no matter how many times HUPD broke up the party, his friends would stagger back insisting on their right to return.

I tried to go to my resident tutor, my House Masters and even President Summers, but this Arafat answers to no one but himself. He wanted victory, not compromise, in our dispute over the room so he destablized the situation with all the dirtiest tactics. I could hear him sitting on the toilet, cackling as bomb after bomb horribly disfigured the porcelain bowl.  “I have no control over it,” he said with grin. “It is the fault of the rich food in the dinning hall.” But I know that’s bull. He just doesn’t want to control it.

On principle, I refused to negotiate under attack, but in practice I just can’t continue under this duress. So instead of negotiating, I’m giving in. I sleep in the stairwell now, and the Chairman generously lets me into my room once a day to clean up after his friends. Meanwhile, he sits at my window and flashes V for victory, promising anyone who’ll listen that this is only the first step. The Chairman plans to takeover the Masters’ residence if Sharon won’t let him back into the Holy Land.

There won’t be peace on Plympton until we send him somewhere far, far away, like Jordan. Not the Kingdom of Jordan, mind you, for Arafat’s already tried that before, but the dormitory of Jordan. Once we banish him to the Quad, we’ll be rid of him for good.