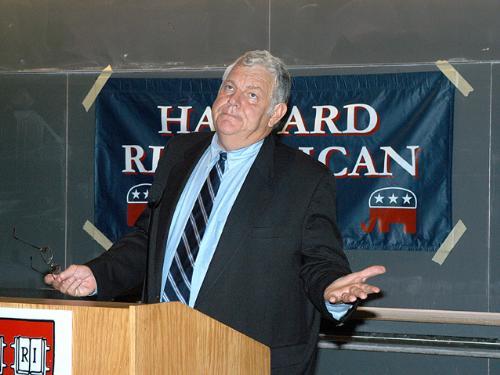 Now is not the time to back down from the war on terror, a panel of conservatives told an audience of 150 students in the Science Center last night.

Woolsey said the U.S. has been successful in spreading democracy throughout the world in the past half century and should not stop now.

He said President Bush was right to declare war on Iraq because the country fostered a program of mass destruction and had ties to terrorist regimes.

“This is the fourth World War,” Woolsey said. “This is going to take a long time.... [The war on terrorism] is going to be with you for most of your adult lives.”

Gaffney urged Americans to avoid complacency as the war drags on.

Although the panelists overwhelmingly supported Bush, Bennett criticized him for focusing more on Iraq’s terrorist connections than its human rights abuses in his justifications for war.

Bennett argued that the Iraq war slowed the spread of terrorism in the world and improved conditions for the Iraqi people.

Bennett told the audience he had met with University President Lawrence H. Summers earlier in the day and proposed that Harvard transfer some of its professors to Baghdad to rebuild Iraq’s educational system.

“People would rather go to Baghdad than Allston,” Bennett said jokingly.

Bennett, a Harvard Law School graduate, called the guerilla fighters in Iraq “the absolute scum of the earth.”

Bennett, a moral crusader who has been lambasted in the national media for an admitted gambling problem, said he is confident in the U.S.’s ability to win the war on terror.

“I used to be a betting man,” Bennett said. “I’m not a betting man anymore. With the United States, I would not bet against us.”

—Staff writer Jonathan P. Abel can be reached at abel@fas.harvard.edu.