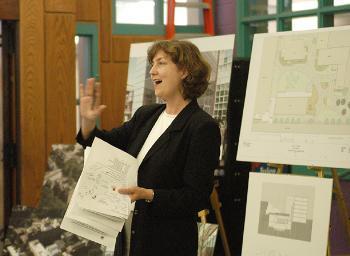 Harvard representatives and activists from the Agassiz neighborhood unveiled yesterday an outline of what would be an unprecedented agreement between the University and a group of city residents—but asked for more time to hammer out the details before the deal is put to a vote.

In an effort to move beyond the traditional town-gown battles over University expansion, members of the Agassiz Committee on the Impacts of Development (ACID) have been meeting with Harvard officials since last year to discuss concrete benefits the neighborhood will receive in exchange for its support of large-scale Harvard construction projects.

The Agassiz area just north of Harvard Yard is home to Harvard Law School and the science departments of the Faculty of Arts and Sciences, which are both short on space and looking to expand.

At last night’s meeting of the Agassiz Neighborhood Council, the negotiating team presented an outline of the proposed deal, in which Harvard will construct 1.6 million square feet of new buildings in the area, while providing the neighborhood with a long-term guarantee that no additional development is planned for the next 25 years.

The University will also agree to take increased steps to reduce the impacts of construction, fund measures to alleviate traffic, and provide benefits to the community—including neighborhood beautification and money for youth programs.

Looking to the future, the deal calls for the formation of a standing committee of Agassiz and Harvard representatives to make sure the agreement is enforced and establish ongoing communication between the University and the neighborhood residents.

Last June, ACID representative William Bloomstein said he hoped to have the specifics of the agreement worked out by this fall, but last night both sides indicated that a final document would not be ready for a neighborhood vote for several more months.

“We’re trying to do something that Harvard and Agassiz haven’t done before,” said Mary H. Power, Harvard’s senior director of community relations. “I think that’s why it’s taking a lot of time.”

Bloomstein said he hoped to present a draft to other members of ACID in October and to the entire neighborhood council at their Nov. 18 meeting. The residents would have a month to discuss the agreement before voting in December, he said.

After several community members said they wanted more opportunities to share their views earlier in the process, Bloomstein agreed to hold a series of informal meetings where residents could speak to the four ACID representatives.

He expressed optimism about the negotiations with Harvard and predicted they would result in a “win-win for both parties.”

“It’s been a long road and we’ve come a long way, and there’s still a piece of work ahead of us,” he said.

Residents questioned whether the agreement, if approved by both sides, would be legally enforceable.

Joel Bard, an ACID representative who is also a lawyer, said it would not be. But he added that it would be signed by high-level University administrators, including Vice President of Government, Community and Public Affairs Alan J. Stone, and would include provisions that “you’d hope an institution whose motto is truth would honor.”

Power said that both sides were coming to the table hoping to create a lasting agreement.

“My sense is this is one agreement that will be lasting, because we’re approaching it with a high degree of accountability,” she said.

An agreement would give Harvard flexibility to fulfill some of its short-term space needs in Cambridge as it plans for its campus of the future across the river in Allston.

A plan presented to University officials this summer envisions a hybrid science and professional campus in Allston, including some FAS science facilities.

The Law School would remain in Cambridge, carrying out any expansion plans in the Agassiz neighborhood. The school will present an update next month on the results of a study looking at options for expansion.

Also next month, the University will go before the city planning board to seek approval for a new science building, the Laboratory for Interface Science and Engineering (LISE), to be located in the neighborhood.

At last night’s meeting, architects presented designs for the building, which will be located behind the Science Center and include specialized laboratories underground.

Professor of Physics Charles M. Marcus emphasized that the building would allow scientists to pursue interdisciplinary research in cutting-edge fields.

“It’s time that Harvard not miss the boat in developing this scientific enterprise,” he said.