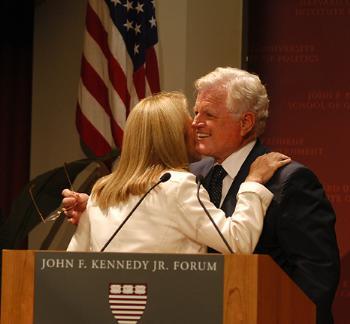 SEN. EDWARD M. KENNEDY ’54-’56 receives a hug from niece CAROLINE KENNEDY Friday at the rededication of the ARCO Forum in honor of the late John F. Kennedy Jr.
By Kimberly A. Kicenuik, Crimson Staff Writer

The ARCO Forum at Harvard’s Kennedy School of Government (KSG), was renamed on Friday to honor John F. Kennedy Jr. and celebrate 25 years of bringing together some of the world’s most prominent political leaders.

Members of the Kennedy family and Harvard administrators commemorated Kennedy’s involvement with the IOP and his passion for public service in front of a packed crowd of students, prominent politicians and Harvard faculty members.

Kennedy was an active member of the IOP’s Senior Advisory Committee for 15 years and a frequent participant in Forum events.

Sen. Edward M. Kennedy ’54-’56, D-Mass., told the mixed audience that the commitment of the KSG and the IOP to promoting political debate was at the heart of Kennedy’s personal mission.

“That’s why John loved this Forum, and the opportunity it provides to hear the words of people they read about, and ask questions about their views,” Senator Kennedy said. “He reveled in the give and take, and anything thought-provoking.”

Senator Kennedy mentioned Kennedy’s founding of George magazine a few years before his death as an example of how he attempted to make young people more aware and more involved with political issues.

Senator Kennedy said the rededication will symbolically link Kennedy and his father, after whom the KSG is named.

“To see their names side by side is to think of all they meant to us—how they inspired us, and how very much we loved them both,” he said.

Caroline Kennedy said the new name represents her brother’s love of discussing all sides of politics and debating the current hot topics.

“John saw the IOP as a vehicle to bring my father’s legacy forward,” Caroline Kennedy said. “He understood that politics was an all-day-everyday affair that merged policy and entertainment.”

The John F. Kennedy Jr. Forum of Public Affairs, located in KSG on JFK Street, has been a hot seat for political debate, discussion, and speech at Harvard since its founding in 1978.

According to KSG Dean Joseph S. Nye, the Forum has hosted more than 2,000 events viewed by more than 600,000 live audience members and millions more via telebroadcasting and cable.

“This is truly a forum in the Greek sense of the word,” Nye said.

To mark its 25th anniversary and renaming, the Forum underwent a massive renovation this summer, combining upgraded lighting and technology with a new stage, new floors and new carpeting.

Nye said that the renovation was financed by gifts from the IOP, but was always imagined by Kennedy himself, who had said he wanted to bring the Forum into the 21st century.

“This is a symbol of both the constant renewal of the Forum and of the new generation of leadership that is born here,” said Director of the IOP Dan Glickman.

University President Lawrence H. Summers, addressing the audience, said that both the renaming and the renovation mark an important moment in the continuing efforts of the KSG and IOP to produce the leaders of the future.

“With the challenges that this world faces, I believe that this Forum in its new conception will help to unite leadership and learning,” Summers said. “Our university will be better able to do its part in training leaders for the next generation because of what we celebrate here today.”