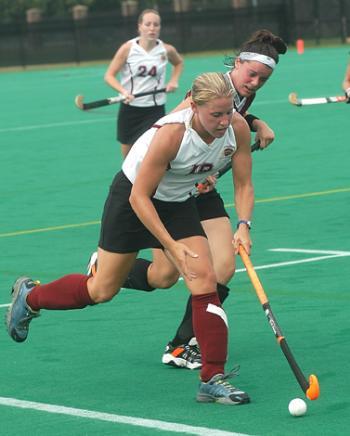 The Harvard field hockey team entered College Park, Md. for a two-game set against ranked opponents in the hopes of leaving with a spot on the STX/NFHCA Coaches Poll. But after a disappointing 3-2 loss to No. 20 Richmond on Saturday, the Crimson rolled into Terrapin country yesterday as underdogs and couldn’t unseat No. 3 Maryland.

Andrews and the Crimson showed flashes of the team that competed in last year’s NCAA Tournament, however, accomplishing something that no one had yet done against the stout Terrapin defense—taking the lead.

“We stepped onto the field and took control of the ball, and said, ‘This is what we’re capable of,’” Harvard coach Sue Caples said. “It gave everyone a good feeling, and we knew that we had to leave it all on the field.”

The Crimson defense then limited Maryland to two goals, both assisted by Emily Boyer and Lauren Powley, until a heartbreaking shot by Anja Boettcher passed tri-captain goalie Katie Zacarian just before halftime.

In the second half, Maryland scored twice more, quashing whatever remained of the momentum Harvard built with the early goal.

The Terrapin defense had shut out six of its eight opponents entering the contest. It didn’t take it long to solve the Crimson attack, either.

“It is nice to go in [to the half] 2-1,” Caples said. “When you score early, you want to keep some kind of momentum. But overall, we executed a little bit better, played more of a complete game. We now know what we can do.”

With a 4-0 shutout of UMass and an electric 3-2 overtime win over Penn last weekend, Harvard fell just short of a stirring comeback, losing 3-2 to No. 20 Richmond (6-1) on Saturday.

Two dramatic second-half goals by junior forward Tiffany Egnaczyk—one on a penalty stroke, the other an unassisted blast with less than two minutes remaining—put the Crimson down by one in the closing moments, spurring hopes of a comeback.

Egnaczyk had also scored the tying goal against Penn, sending the game into overtime.

“There was definitely that sense again, as in the Penn game,” Caples said. “We learned then that we could come back from being down, and [the players] knew they were capable. It just wasn’t early enough.”

The Crimson had outshot Richmond 8-3 in the first half, but the solid play of the Spiders’ zone defense kept Harvard scoreless until Egnaczyk’s shot at 54:42.

The Spiders, behind goalkeeper Michelle Swartz’s nine saves, were able to hold on despite the late rally.

Richmond’s two first-half goals, supplemented by another at 42:10, gave the Spiders all they needed to secure the win.

Missed opportunities, including a key shot by sophomore midfielder Jen McDavitt, plagued the Crimson all day.

In spite of clutch efforts here and there, Harvard sorely needed the complete game that eluded it early on.

“It was a hard-fought game, and we did not play well,” Caples said. “We underachieved.”

Harvard will face No. 11 Connecticut on Wednesday at 4 p.m.