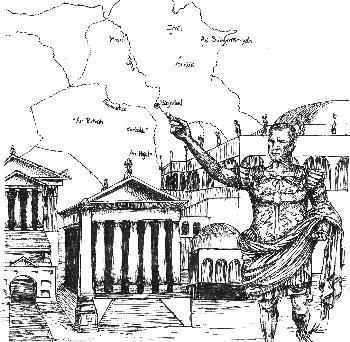 My countrymen, I write to you from Athens, in this the ninth month of the third year of the reign of Emperor Nuntius Minimus, as this wretched place wrestles with its irrelevant conscience over our great triumph in subjugating the Scythians and their leader, Vanitas, our most reviled foe since Vercingetorix.

This is a strange place compared to our eternal city, clinging, in this age of empire, to outdated notions of democracy and law. Why, even as I write, the whole polity is taken up by the case of a functionary who opened his veins, in fear of being ostracized—in Athenian terms, being banished from the city and its colonies. The government of the city is imperilled by this—not by invading hordes at the Long Walls, nor by an insurrection of the hoi polloi.

Indeed, the populus have the legal forms to bring down their masters, even their renowned leader, Narcissus. He himself, unlike our own dear Imperator, is compelled to debate and argue his rights and responsibilities with the masses, who hold his future in their hands. Narcissus has no Praetorian Guard to protect him, merely a collection of sophists who toil day and night to coin the arguments, often specious, for him to make before the city’s courts.

Let us remind ourselves of the reason for his discomfort. Vanitas had mocked three emperors, and had supported two incursions of his followers into the Empire. The Emperor saw an opportunity to avenge one of those emperors, his father, Desperatus Maximus, whilst boosting the coffers of Rome with much needed booty. After all, bread and circuses cost money, and the senators remain reluctant to part with any of their riches. At a stroke, Nuntius Minimus could please everyone. That is, of course, other than non-Romans.

This is where Narcissus was valuable. He still sees Athens as influential with Rome—almost as its cultural and political mentor. Rubbish, of course, but an illusion which was seen as useful by Nuntius and his advisers. Dazzled by the power of Rome, Narcissus was persuaded to join in the attack on the Scythians on the pretext that Vanitas was a threat to Athens. Nuntius needed no such pretext—the needs of the Roman imperium were sufficient justification for the Emperor, the Senate and the people.

Oddly, Narcissus has no such open command of his own people. Their archaic system demands the people’s support for war, but Narcissus was unable to convince them other than by exaggerating the threat of an imminent Scythian invasion. No matter that any invaders would first need to overcome the border tribes of their own territory, then the Macedonians, then the mountains. Indeed, some Athenians had immediately panicked and rushed to defend the Long Walls.

The rhetoricians amongst their number—and there are many in Athens—worked their wiles on the citizenry, who demanded more and more explanation for the war. They cynically linked the conquest of the Scythians with the Athenians’ own genuflective position within the Empire. The traditionally troublesome Greeks took their poisonous words to heart, and focused their bile on Narcissus, who is increasingly isolated.

In truth, his affectation of Roman customs has not endeared him to his people. He is, they complain, more Roman than Greek. They, for their own part, continue to labour under the misapprehension that they hold a special place in the civilized world—why, we Romans are still regarded as barbarians by these people; a people who cling to their glorious past, and, in so doing, fail to recognise this, the late evening of their prominence.

Yet there is a danger for Rome in the weakness of Narcissus. Some here murmur for a closer federation—for trade purposes, of course—with the rest of the Greek world. This cannot be allowed by Rome, if we are to maintain our income from the provinces, and, hence, our control of the Empire. Nor can we contemplate the Greeks trading overmuch with the Parthians. We may be at peace with the Parthians now, but they are a looming presence in the East, and, one day, might do more than trade with the Greeks. Compared to such a prospect, the Punic Wars would be like a day at the Games.

Remember, too, it was renegade Parthians who committed the terrible attacks on Rome’s virtus only two years ago this month. The apocalyptic mayhem shook Rome to its foundations, and questioned the wisdom of an all-embracing and welcoming Mother Rome.

But whilst these attacks emboldened Rome’s august Imperator, here in Athens, Narcissus has failed to assert himself with the impudent citizenry. Perhaps it is time for a more direct intervention by Rome. It might begin with removal of this titular leader, before his meddlesome people do it, and replace him with someone wholly unacceptable to our interests. Athens should then be directly ruled from Rome. Of course, Athenians cannot be given Roman citizenship—they are incorrigibly fractious and unworthy of the honour.

We should, however, look after our useful friends, like Narcissus. I am sure that he would be immensely popular, together with his wife Livia, at the senatorial villas, and at the reading of poetry in the circus. He will not, I fear, last long in Athens if left to his own devices.

Finally, in closing, news has just reached us here that the Scythians appear to be pressing through onto the Xth Legion in Dacia. Many legionaries died in a battle on the Danube, although, thankfully, the standards were not lost. We should perhaps consider whether Dacia is defendable, and what exactly we gain there when some of our finest soldiers are penned down in that barbarian Hades. After all, we have other, more pressing, needs to consider, in the forests of Germania, and the deserts of Parthia. Who, in the Senate, will approach the emperor on this, and say—Ad venatum vadamus. Stercorem pro cerebro habes, sed denarius hic sistit: Let us cut to the chase. You have shit for brains and the buck stops here.

Peter Kilfoyle is a member of the British House of Commons representing Liverpool Walton. He is a former defence minister in the Blair government.