No Morris, No Rose, No Problem 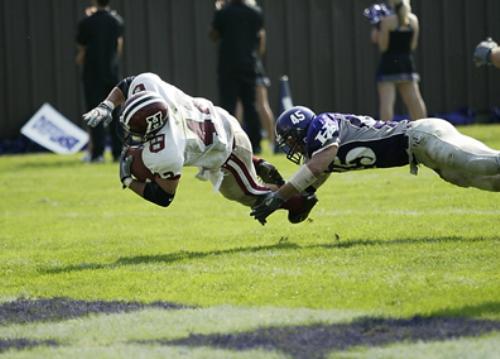 Sophomore running back RYAN TYLER (42) registered 18 carries for 85 yards and a pair of touchdowns against Holy Cross on Saturday.
By Timothy J. Mcginn, SPECIAL TO THE CRIMSON

WORCESTER, Mass.—To all the naysayers who thought it wouldn’t be possible for the Harvard football team to assemble an offensive attack without graduated stars Carl Morris ’03 and Neil Rose ’02-’03, take a look at the mess junior quarterback Ryan Fitzpatrick and his crew left in Worcester and think again.

With the team firmly in his command for the first time in his collegiate career, Fitzpatrick turned in the single finest offensive performance in Harvard history, racking up a record 471 yards of total offense and three touchdowns—two passing, one rushing—and earning the Johnny Turco Memorial Trophy as the game’s top player.

“I haven’t really heard any of these number things,” Fitzpatrick said. “But that wasn’t our best game on offense and that’s what so exciting about this. We obviously played very well on offense, but there are a lot of things we need to shape up and I think were going to be a very, unbelievably good offense this year.”

He distributed the ball brilliantly, finding six different receivers for 359 yards through the air. Fitzpatrick rarely forced his throws, confounding the Crusaders’ secondary and patiently exploiting the vulnerabilities of each defensive strategy, whether that meant passing down field or in the flat.

“It’s awesome,” Fitzpatrick said. “We are very deep at the skill positions, wide receivers and running backs, and you kind of had the coming-out party of [sophomore transfer] Clifton Dawson today. There’s another weapon. It just makes my job easier.”

With Holy Cross using man-to-man coverage early on, Fitzpatrick and junior wide receiver Brian Edwards connected with such ease that they seemed like oversized children playing monkey in the middle with no one even remotely capable of stopping them.

“What I said privately to people—certainly not publicly—was that the name they were going to hear at the end of this game was Brian Edwards,” Crimson coach Tim Murphy said.

The duo hooked up for four receptions, 143 yards and one touchdown—in the first quarter.

“Coach told us to pray for man-on-man coverage because their corners were young and we could take advantage of them deep,” Edwards said.

Sure enough, their prayers were answered.

Abusing the inexperienced secondary, Edwards repeatedly blew by his coverage, with Fitzpatrick lofting perfect passes into his waiting arms.

And the receptions were only the opening act in Saturday’s Brian Edwards Show.

Edwards twice turned modest gains into drive-making receptions with speed and sheer determination combining for dozens of yards after the catch, his fluid lateral movement leaving opposing safeties tackling nothing but air.

“Nobody really knew who he was,” Fitzpatick said of Edwards. “He didn’t get a lot of playing time last year or a lot of catches, but obviously today he showed he’s going to be a tremendous player for our team and for the Ivy League.”

After getting badly burned in the first quarter, the Crusaders changed to a zone defense to prevent further deep balls.

But that couldn’t stop Fitzpatrick.

Despite no longer being able to safely throw long down the field, he continued to find his receivers under coverage across the middle, slowly driving the team downfield.

Though he forced one pass into tight coverage—resulting in his first interception in 193 attempts and just the second of his career—Fitzpatrick made no other appreciable mistakes, always doing what was safest when the defense closed in.

“He’s one of those guys who knows the offense so well that he’s very difficult to defend,” Murphy said. “Even when they covered the receivers well, he’d scramble for yards.”

Though he was sacked four times on the afternoon, the Crusaders were poised to take him down in the backfield on several more occasions.

But after slickly maneuvering his way past the line of scrimmage, Fitzpatrick bounced off defenders for gains as large as 30 yards, frustrating a defense desperate to make a big play.

Thus, when he ran the quarterback option, Holy Cross had no choice but to cover him, setting up sophomore running back Ryan Tyler perfectly.

Twice Fitzpatrick tossed him the ball while running the option. Twice Tyler punched it in for a touchdown.

Splitting time with sophomore transfer Clifton Dawson, Tyler carried the ball 18 times for 85 yards, grinding time off the clock as the game wore down.

Dawson rushed 17 times for 76 yards and one trip to paydirt, exploding through holes and sprinting by defenders in a first glimpse of his tremendous potential.

He did, however, fumble on the one-yard line as Harvard attempted to put the game well out of reach in the final minutes of the fourth quarter.

“I thought we played really well,” Murphy said. “I was really pleased with the effort, but I was a little disappointed with the executing in some areas, specifically red zone offense.”

And that’s a thought that will likely have future Crimson opponents a little worried.

Equally worrisome—Harvard’s ability to shut down the run.

Plugging the holes opened by the offensive line, Harvard defenders poured through early, frustrating not only the running game, but also Holy Cross quarterback John O’Neill.

But Balestracci’s presence on the field extended well beyond the hits he delivered.

Afraid of receiving a crushing blow, Crusader senior wideout Ari Confesor pulled up while running his route to avoid finishing a collision course with Balestracci’s shoulders plowing into his chest.

Senior Chris Raftery was equally punishing in the defensive backfield, leading the squad with 10 solo tackles.

Raftery’s transition from cornerback to safety was seamless, with the seasoned veteran providing solid coverage throughout and serving as the last man back on three occasions, his open field tackles saving certain touchdowns.

Had it not been for a Holy Cross punt block and solid field positions acquired on special teams, the Crusaders would have had difficulty starting much of anything at all in the face of such defense.

But, as with any season opener, there were difficulties. Blown coverages, dropped balls and miscommunications held the team back.

“There were a lot of opportunities that we left out there, a lot of mistakes that I made that I can learn from,” Fitzpatrick said.

Just how much of that learning his opponents will be able to handle remains to be seen.