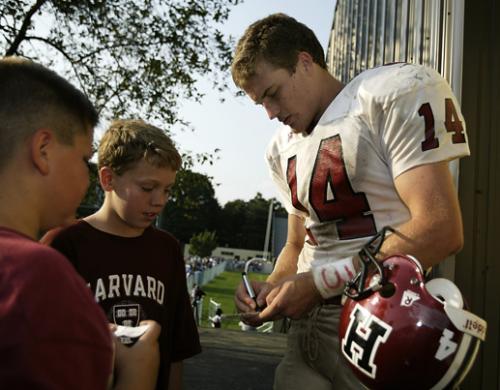 Junior quarterback RYAN FITZPATRICK signs autographs after setting a record with 471 yards of total offense at Holy Cross.
By Lande A. Spottswood, Special to the Crimson

WORCESTER, Mass.—Last year, he must have stood there almost half a dozen times, fidgeting and answering questions after a game, talking up his teammates and playing down another gaudy statline of his own.

There was no more wondering if his performance was good enough. No more Tim Murphy quotes that began with, “Ryan has done a great job, but...” No more questions about next Saturday’s starter.

There was no more Neil Rose.

Not a single reporter asked a single question about the Crimson’s most prolific passer ever and the architect of Harvard’s only perfect season since 1913. The questions on Saturday were all about Ryan.

They asked about his record-breaking 471 total yards, which Fitzpatrick said were “not bad.”

They asked about the offense—his offense—which Fitzpatrick said will be “unbelievably good.”

And they asked about his new favorite target—Brian Edwards—because on this Saturday at least, Carl Morris was forgotten, and he wasn’t the only one.

There were no questions about Jay Mills, Nick Palazzo, Jamil Soriano or Jack Fadule. And that—more so than its 636 total yards—was the Crimson offense’s most impressive feat this weekend.

With another two-minute scoring drive starting every three minutes, there was no time to pause and remember. And with the visiting crowd cheering every jaw-dropping play, it was too loud for a moment of silence.

Last year’s offense was great, but this year’s was great enough to make you forget it—at least for one afternoon. And next week they think they can be even better.

“I haven’t really heard any of these number things,” said Fitzpatrick when he was asked about the team’s statistics, “but that wasn’t our best game on offense, and that’s what so exciting about this. We obviously played very well on offense, but there are a lot of things we need to shape up.”

The red zone offense was weak. Three times that the Crimson penetrated inside the Holy Cross 15-yard line it had to settle for field goal attempts (only one of which was good). Another time Harvard fumbled inside the five.

A few passes were dropped and a few underthrown. A few holes were missed and a few never materialized. The Crimson could have had 63 points to go along with its 636 yards, but it didn’t matter. These guys were putting up highlights so bright the flaws couldn’t be seen no matter how hard you squinted.

Clifton Dawson—a transfer from Northwestern—burst onto the scene as fast as only a speedster like him could, alternating drives with sophomore running back Ryan Tyler throughout the game. After he took his first career carry up the middle for a clean 11 yards, one radio announcer frantically searched his roster for No. 33, before exclaiming, “And a great run by...CLIFTON DAWSON?”

Dawson and Tyler combined for 161 yards and were only shown up by Edwards and Fitzpatrick, who combined for countless broken tackles.

When the Crusaders opened the game in man coverage, Fitzpatrick found Edwards time and time again. The junior showed sure hands and shifty feet, eluding tackler after would-be tackler and speeding around to the outside for an extra 20 yards per catch.

Then Holy Cross went to a zone. So Fitzpatrick threw shorter passes to guys like Matt Fratto and Rodney Byrnes and started scrambling, breaking ankles and hearts and records.

There weren’t enough plays for all the playmakers that emerged on Saturday, and after the game the overwhelming sensation was, “Let’s play two!” You wanted to see more of these guys. You didn’t want the game to end, but when it finally did, all anyone was thinking about was the players who were on the field.

After the game, Fitzpatrick was asked which of the Crimson’s six touchdowns was his favorite. He paused and replied, “I’m trying to think of all the touchdowns. It is really tough to remember them all.”

Just 15 minutes after the game, Fitzpatrick had forgotten his own TDs.

But everyone else had forgotten Neil Rose’s.