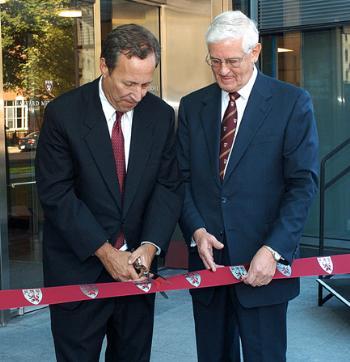 Summers pledged his support to a wave of ambitious biomedical research initiatives, citing a new systems biology department at the Harvard Medical School (HMS) and the $300 million Broad Institute for genomics research as examples of projects already underway.

Reaffirming his goal of finding practical applications for the University’s research, he stressed the importance of facilitating the transfer of discoveries “from the bench to the bedside.”

Summers said one key part of the coming round of life sciences expansion would be a new focus on global health issues, “in the recognition that we have an obligation to use what we know to address AIDS, malaria” and other global health crises. Another central focus would be further exploration of systems neuroscience.

Summers more generally emphasized yesterday the centrality of life science work to the University’s growth over the coming years.

Summers warned that despite the massive costs inherent in pursuing cutting-edge research, the University cannot afford to hesitate.

“We must not miss the tremendous opportunity that is inherent in this moment—excellence has its cost,” he said. He added that Harvard must ensure “that the limits on what we can accomplish are the limits on the imaginations of our scientists.”

The $260 million New Research Building (NRB) will serve as a model for future University life sciences development, according to Summers, who highlighted the NRB’s wealth of teaching space and its facilitation of increased interaction with teaching hospitals and undergraduates—a Summers priority.

“We are as a University for the first time moving toward common training in the life sciences,” he said, adding that he hoped future students of the field would be able to glean “not the best that one [school] can offer, but the best that the University can offer.”

The NRB spans a massive 525,000 square feet and will play home to HMS’ pathology and genetics departments. The L-shaped glass structure, which is four stories high but rises to a ten-foot tower in its rear, will house approximately 800 researchers, including 50 drawn from Brigham and Women’s Hospital and Beth Israel Deaconess Medical Center, two of the University’s most prominent teaching hospital partners.

The NRB will include a bevy of other HMS research programs, including the Harvard-Partners Center for Genetics and Genomics.

HMS Dean Joseph B. Martin said he hoped the NRB would help strengthen the ties between faculty at HMS and its teaching hospitals, bringing together basic science and clinical research.

Nobel laureate Sidney Brenner, of the Salk Institute for Biological Studies in La Jolla, Calif., delivered a keynote address on the trade-offs between data collection and “knowledge” in the future of biology.

Boston Mayor Thomas M. Menino was scheduled to appear at the ribbon-cutting but did not attend. Two local officials and the headmaster of the neighboring Boston Latin School were at the opening ceremonies.

Designed by Architectural Resources Cambridge, Inc., the NRB adjoins the Harvard Institutes of Medicine at its existing site in HMS’ North Quadrangle on Avenue Louis Pasteur. Construction began in 2001 on the structure, which features a spacious conference center in addition to lab space.

Tomorrow, HMS will kick off a six-month medical seminar series at the NRB to honor the 100th anniversary of HMS’ original groundbreaking at its Longwood campus.