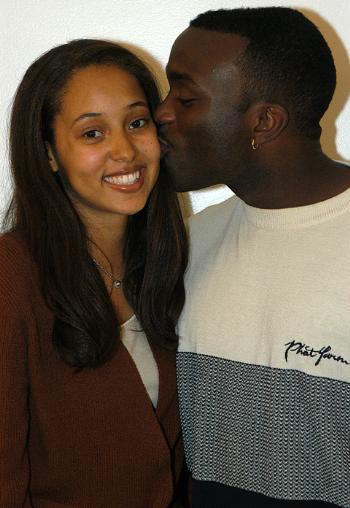 It was a rocky start for a too-cute-to-be-true ending. Taj had the luck to be in a single by himself
By Jannie S. Tsuei

It was a rocky start for a too-cute-to-be-true ending. Taj had the luck to be in a single by himself on pre-frosh weekend. After chatting with Tonika in his room, whom he had met at the pre-frosh barbecue, until 5 a.m., he asked her to stay over. Rebuffed, he walked the pretty Texas native back to her host’s room, where he made yet another bold attempt: he asked for a kiss. “Don’t beg,” she said, borrowing a line from the 1990 movie House Party. That was 1995.

More than eight years after they first met, Taj J. Clayton ’99 and Tonika C. Cheek-Clayton ’99 are married and are now pre-law and pre-business resident tutors in Quincy House. Having dated all throughout college, the two saw their marriage in January 2000 as a natural conclusion.

“Marriage for us is easy,” Tonika says as she leans back on her husband’s arm. “We just love being together.”’

Their love of each other’s company was apparent from the start. Keith E. Bernard ’99, one of their college friends, noted Taj’s obvious interest in Tonika pre-frosh weekend, partially because Bernard himself also thought Tonika was cute. “You could say I’m basically responsible for Taj and Tonika because if I hadn’t backed out, she would’ve married me,” Bernard says, laughing.

And although they parted during pre-frosh weekend on a note of refusal, Taj and Tonika exchanged “real letters” throughout the subsequent summer. In an act of fate, Taj’s family moved from New Jersey to Texas that summer, and he was able to visit Tonika in Houston. Lady Fortune seemed to be working to bring Tonika and Taj together.

Three weeks into freshman year, the two began officially dating, and from then on, she says, “we just became one word—Taj and Tonika.” And though she was a theater enthusiast and he was a sports junkie, Taj planned a rather theatrical birthday celebration for Tonika freshman year. He took her on a blindfolded cab ride to the Pfoho JCR, where she opened her eyes to a set dinner-table, sparkling apple cider, and a friend playing and singing a “commissioned” piece titled “Tonika.” She laughed at the memory even as she says, “I cracked up.”

The many memories they share of Harvard made coming back exciting for both of them. When Tonika was accepted at the Business School and Taj at the Law School, they applied to be tutors in the House system. “It [was] like returning to our roots,” Taj says. Faced with offers from Adams, Winthrop and Quincy, the two ultimately decided on “The People’s House” because of its warm and welcoming environment. They will bring to Quincy House their outgoing friendliness and—to the delight of many Quincyites—a good amount of physical attractiveness. Recalling the moment he first saw Tonika, Taj said, “I didn’t think Harvard attracted pretty girls like that.” Unfortunately for not-so-scrupulous residents, the two halves of this attractive couple are firmly glued together.

But for those Harvard students in despair about finding love at a place where people often choose homework over love, Taj and Tonika are a “fairy-tale story” come to life. Bernard captured its appeal as he described his own feelings at their wedding. “If you ever had doubts about true love,” Bernard says “you’d throw all those out the window.”