Dunkin' Into the Square 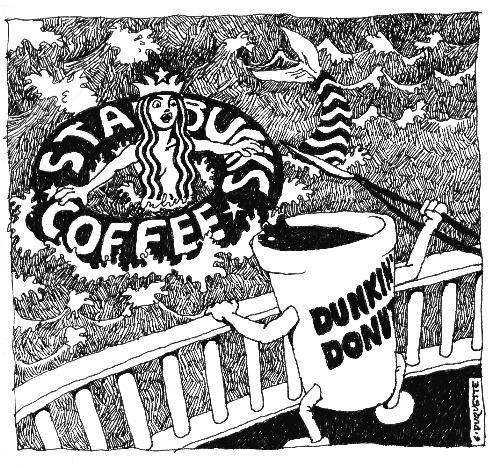 By Michael A. Capuano

Freshly-minted first-years in Greenough and Hurlbut are not the only new residents moving in just off the Yard. After years of yuppification in Harvard Square, a Dunkin’ Donuts/Baskin Robbins combo store recently bucked the trend by returning to the corner of Bow Street and Mass. Ave. The old shop, known internationally as the storefront where Matt Damon asked if we “liked them apples,” will hopefully do a little to make the Square more student-friendly, battling the encroaching designer bars and diamond-studded watch shops catering to tourists and the middle-aged.

The demise of the original store—it was replaced by the Grafton Street Bar—is a fate shared by many beloved Harvard Square establishments; The Tasty (late home of the “Ve Ri Tas-ty” Burger), the Wursthaus, the Crimson Sports Grille, Store24 and Siam Garden have all been replaced by newer storefronts for swarms of tourists. We now house four Starbucks, four upscale bars that are just too clean for any self-respecting college student to haunt, an Abercrombie and Fitch, a Gap, a gourmet desserterie and two high-end watch stores (in case you can’t find the Rolex you want at just one of them).

With the arrival of the new Dunkin’s, hopefully this will mark the beginning of the end of the mallification that has swept Cambridge. The over-priced, open-air boutique that Harvard Square has become does little for students and locals except rob them of the college town with unique and quirky shops that once defined Cambridge. It was only a few months ago that Rock Bottom was packed nearly every weekend night with students buying two-dollar draft beers. Now, the only place in the Square where you can get a burger and beer and watch a sports game without spending an average weekly salary is downstairs at Pizzeria Uno.

Sure, a third Dunkin’ Donuts may seem excessive—there are already two shops in Harvard Square—but I don’t want to go down into the bowels of the T or head to the Kennedy School to get a regular coffee at a decent price. With a Mass. Ave location, good, cheap coffee will be right on the way to class for every river student. Some may claim that Starbucks fits the “cheap, good coffee” bill, but let me tell you: five dollars for coffee, caramel, whipped cream and low-fat vanilla flavoring isn’t coffee. It’s dessert, you over-commercialized, health-club-dependent, BMW-driving yuppie.

If the Square follows Dunkin’ Donuts’ lead, locals and students alike might soon enjoy a bar they can feel comfortable going into without wearing Acqua di Gio or even a clothing store that doesn’t charge 50 bucks for a pair of frayed shorts. And who knows, in a few years, Harvard students might not have to flock to Davis Square to experience reality.

—Michael A. Capuano is an editorial editor.