Weighing in on the Fat Tax

Unhealthy foods put a burden on society and should be taxed. 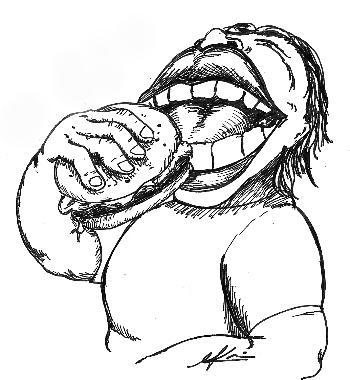 By Brian A. Finn

It’s hard not to notice the obesity epidemic in America. Whether it’s the 200-pound sixth grader waddling his way down the street or the middle-aged woman sitting next to you on the plane—her portly stature impinging on your right to carry a third piece of luggage—America has become a nation of fat people. More than half of all Americans experience health problems because of their weight; a full quarter of the country is considered clinically obese; and one out of 50 Americans is so fat that they will die unless they get drastic fat reduction surgery. Every year obesity claims the lives of hundreds of thousands of Americans and costs the country more than $100 billion.

But, as big and devastating a health problem as it is, surprisingly little attention is paid to obesity. The only public discussion of health issues usually revolves around smoking. Turn on the television and you find news programs that talk about evil tobacco companies and how unhealthy it is to smoke. The media is ceaseless in its condemnation of smoking, and it’s become so politically incorrect that it is almost impossible to do—being banned in practically all public areas from office buildings to bars. Whatever smokers are left, they live in a world that looks down upon their very existence with patent condescension.

Obesity, on the other hand, has been an issue largely ignored by pundits on television and politicians in office. It hasn’t been properly acknowledged because there are many who stand to gain from Americans’ overindulgence. The fact is that the expensive campaign against cigarettes and tobacco companies did not arise out of concern for the public good; rather, they surfaced because certain groups and individuals benefited from it. For the most part, the commercials you see on TV come from sources such as trial lawyer organizations that, in return, receive financial gain from a public that hates cigarettes and tobacco companies.

Right now, too many individuals and corporations have a vested interest in keeping things the way they are with regards to the sedentary, fast food consuming lifestyle that leads to obesity. A network such as NBC isn’t going to start airing public service announcements telling people to quit watching TV and get some much-needed exercise. Nor would it go on a crusade against cheeseburgers and soda when many of its corporate sponsors are in the fast food industry. There are a number of companies that profit from the unhealthy habits of Americans and thus further perpetuate them.

But while corporations are responsible in part for this predicament, suing them is not going to solve the situation. Like the lawsuits against tobacco companies in the past, such actions won’t help anyone but the plaintiff lawyers. Rather than sue, these corporations should instead be taxed. While an Egg McMuffin may cost 99 cents, its real cost to society is much greater, and its price should reflect that. The government has got to step in and start affecting real policy. Of course, this will be hard considering the power of the sugar and fast food lobby. However, something must be done unless we want the America of the future to consist of a nation of unhappy diabetics who can barely walk down the street.

Brian A. Finn is a business editor.