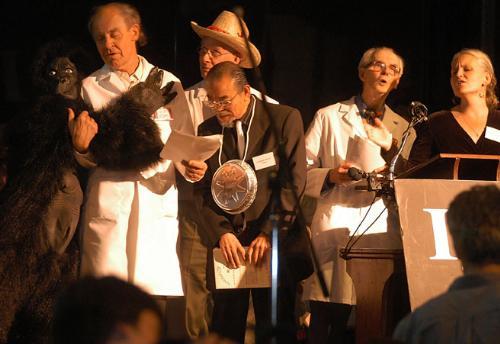 Daisuke Inoue of Hyago, Japan, winner of an Ig Noble prize, is serenaded by a pack of Nobel Laureates, singing “It’s just too good to be true.”
By Nathan J. Heller, Crimson Staff Writer

As students, scientists and enthusiasts filed into Sanders Theatre last night for the Ig Nobel award ceremony—“honoring achievements that first make people laugh, and then make them think”—a flurry of paper airplanes soared across the room. One landed between the fingers of a pianist entertaining the growing crowd with the churning of a Romantic sonata. A couple of white-haired men with ponytails in the first few rows cupped their hands around their mouths and goaded on the pianist. Then they picked up an airplane and discussed how to improve its design. It was that sort of evening.

Some of the world’s top scientific minds—and all of their attendant eccentricities—piled into Memorial Hall for the “14th first annual” Ig Nobel ceremony, which celebrates scientific projects that “cannot or should not be reproduced,” said master of ceremonies Marc Abrahams, who edits the Cambridge-based Annals of Improbable Research. The 10 achievements honored this year ranged from Karaoke to comb-overs patents to invisible gorilla suits.

The ceremony—which has become an object of cultish delight for audience members—showcases a dizzying sequence of mock tributes and absurd skits, monitored by its mascot Ig: a bespectacled, nearly nude bald man painted silver from head to toe who wandered around carrying a flashlight. The evening also featured genuine Nobel Laureates. Harvard chemistry laureates Dudley R. Herschbach and William N. Lipscomb, as well as physiology or medicine laureate Richard Roberts, presided over the ceremony, leading everything from a can-can dance to a Karaoke rendition of “Can’t Take My Eyes Off You.”

Presentations sped forward with the verve of a variety show, thanks to “Miss Sweetie-poo,” a nine-year-old girl in a flowered dress who said, “Please stop—I’m bored,” repeatedly until long-winded speakers brought their oratory to a halt.

Many of the evening’s events were centered around this year’s theme of “diets.” Between presentations, a troupe of three singers performed “The Atkins Diet Opera,” a fictionalized account of Richard Atkins’ inspiration in inventing his low-carb diet. (He got the idea, the opera speculated, from watching his pet cats.)

Still, the evening’s focus fell on the honorees themselves—and their improbable accomplishments—divided into categories mimicking the real Nobel Prizes. Donald J. Smith and the late Frank J. Smith received the Ig Nobel in Engineering for patenting the bald-spot comb-over.

“The purpose of patenting the comb-over was to document and preserve it for posterity,” Donald Smith explained in his acceptance speech, after receiving a pie-tin medal and box of cereal. “Comb on, brothers. Comb on.”

The Ig Nobel award in Chemistry went to the Coca-Cola Company of Great Britain, “for using advanced technology to convert liquid from the River Thames into Dasani, a transparent form of water, which for precautionary reasons has been made unavailable to customers.” No one from the company was present to acknowledge the award, but Hershbach used his chemical expertise to explain the magnitude of the achievement. Dasani, he said, had twice the legal limit of toxic bromates.

The Ig Nobel award for psychology went to Daniel Simons, from the University of Illinois at Urbana-Champaign, and Harvard’s own Christopher Chabris. Their study, “Gorillas in Our Midst”—performed at Harvard—showed that people who selectively focused on one thing often overlooked normally conspicuous surroundings, including men in gorilla suits.

Simons, who has followed the Ig Nobels for several years, says the dubious honor came as a pleasant surprise for research he completed six years ago. “I was really excited,” he said. “I like the idea of science being fun as well as informative.”

But the hero of the evening turned out to be Daisuke Inoue, freshly arrived in town from Hyogo, Japan. Thirty-three years ago, Inoue invented the Karaoke machine—an achievement that garnered him an unexpected standing ovation last night. He never patented the invention, which he created “to teach people to sing,” and had no idea that it had gained international popularity—and notoriety—until Time Magazine published a feature on the technology in 1999.

Inoue, who knew nothing about the details of his honor until the ceremony itself, received the Ig Nobel Peace Prize because his invention offered “an entirely new way for people to learn to tolerate each other.” As he spent the afternoon in Sanders Theatre, being interviewed intermittently by Japanese television, he said the award came with more confusion than distinction.

“A real Nobel prize gives you money and funding to come here, but this honor doesn’t give you anything,” Inoue said through a translator. He said his travel was being funded by some generous friends and associates.

Despite the global success of his invention, in fact, Inoue has made no major profits from the invention. He’s recently been working on a device to kill vermin living inside Karaoke machines.

“For the Karaoke,” he explained, “the cockroach and mouse are a kind of enemy.”