Republicans Face Off Against Dems 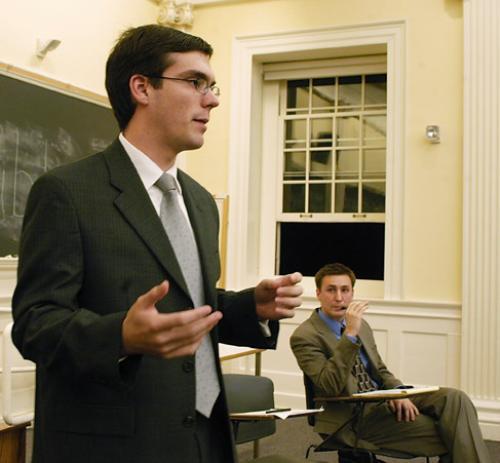 Members of the Harvard Democrats and the Harvard Republican Club (HRC) played the most prominent roles in the debate, but the format allowed for responses from the audience as well.

Democrats and Republicans laid out their parties’ strategies for fighting the War on Terror in Iraq and beyond, combating rising health care costs, privatizing Social Security, and lowering unemployment.

More than 50 students attended last night’s debate, which was held in Harvard Hall.

Chairman of the Harvard Political Union Vivek G. Ramaswamy ’07 moderated the debate. He addressed foreign policy issues first, asking whether the war in Iraq has made the United States more secure.

“This is a war that would prevent us from having to face terrorists here at home,” said HRC debater Matthew P. Downer ’07, who serves on the board of the club.

Harvard Dems debater Andrew C. Fong ’07 was skeptical of the Republicans’ arguments. “Has the world become a safer place since we invaded Iraq? Hell no!” he said.

“We’re losing the battle of ideas when it comes to the War on Terror,” he added later.

Ramaswamy directed each question at a designated debater from each party and then turned to solicit a response from one Republican and one Democrat audience member.

“The Republicans have never said why we’re safer,” audience member Ari S. Ruben ’08 said. “The fact that they have to defend their stance on the war in Iraq speaks volumes on Bush’s credibility.”

Dan A. Dunay ’06, another audience member, ardently defended President Bush’s actions. “We need a coherent idea of where we’re going,” he said. “We need to look forward to freedom and liberty around the world in the future...and, if that means going into Iraq and taking out a dictator, then it’s worth that cost.”

Dunay’s remarks, delivered with a speed and clarity unmatched by any other participant, elicited strong reactions from the audience.

Ramaswamy also asked the debaters about Bush’s 2000 campaign promise to privatize Social Security and the rumors of a “January surprise” to put that motion into law.

“[Bush] would have been more effective in getting to it, had he not had the surprise of Sept. 11,” said debater James P. M. Paquette ’06, member at large and policy director of the HRC.

Eric S. Fish ’07, a debater for the Harvard Dems, was not convinced. “Privatizing Social Security would screw over the people who are just coming into it now,” he said.

Toward the end of the debate, Ramaswamy spurred a verbal altercation when he asked an audience member’s written question about whether the Democrats thought the 57,000 civilian casualties in Iraq were “acceptable.” The Republicans cried foul and insisted the question should have been directed at them. After a brief shouting match, both sides managed to restore order in time for closing statements.

Downer used the Republicans’ final remarks to criticize their opponents. “What we’re dealing with are a group of people who disagree about what one man thinks,” he said. Because Democrats dislike Bush, they rally around Kerry, he said, not because of any fervor for the Democratic nominee.

Speaking to The Crimson afterwards, Ramaswamy said the debate was designed to avoid showing preference for one party over another, giving equal time to each side.

“It was a splendid opportunity for both sides to debate, although it became a little aggressive at the end,” Dunay told the Crimson. “The debate didn’t descend into a wrestling match, but we came close.”