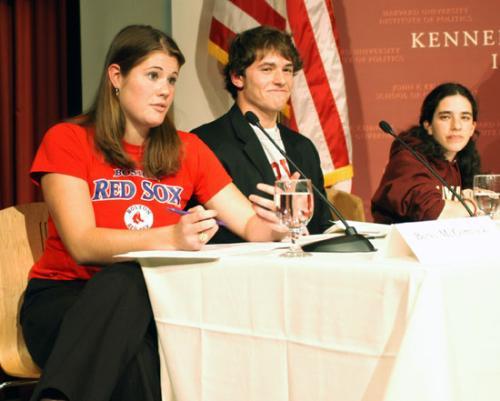 Six athletes traded in their spots on the sidelines for seats at the political roundtable last night, trading jabs over the approaching presidential election at “Jock the Vote,” a niche debate sponsored by the Institute of Politics (IOP) and H-Vote.

Divided evenly down party lines, the sextet tackled the status of the economy, national security and the war in Iraq, burgeoning health care costs and the American educational system, among other topics.

Sophomore wrestler Nathan Picarsic originally pitched the idea to the IOP’s National Campaign Commission as a way to present the issues in a light relevant to a frequently overlooked section of the Harvard population.

“We were basically looking to localize the debate a little bit to the interests of athletes,” Picarsic said, “and to make them more readily identifiable.”

The discussion was moderated by Chris Nowinski ’00—currently a World Wrestling Entertainment (WWE) grappler known as “Chris Harvard” and formerly a member of the Harvard football team—who has become a familiar face at the IOP thanks to his participation in the “Smackdown Your Vote” youth voter awareness program. Nowinski said that he had taken part in several similar events nationwide, and hoped that the Harvard athletes would engage in more substantive discourse than that which he had previously encountered.

“At the University of Miami, we got kinda bogged down when students couldn’t decide between ‘tastes great’ or ‘less filling,’” Nowinski joked, alluding to a popular series of beer commercials.

Battling an unfamiliar and at times unclear debate format, the debaters—rower Betsy McCormick, sailor Reva Minkoff and hockey player Dylan Reese aligned with the Democrats, track and field’s Christian Ayers, women’s lacrosse player Hope Jones and coxswain Mark Adomanis for the Republicans—initially struggled to settle into their respective comfort zones, looking uncertainly from side to side when a warning bell prompted them to conclude their arguments.

But Nowinski, who frequently interjected his easygoing personality into the otherwise tense John F. Kennedy Jr. Forum, provided as gentle a reminder as a man of his stature could, playfully yelling, “15 seconds! Go! Go! Go!”

After two or three exchanges and a bit more goading from Nowinski, the sides engaged in more pointed debate. At first the panelists primarily defended party positions with recycled rhetoric, but comfortably carved out their own arguments on later questions.

“Stem cells are one of the most promising opportunities facing science, facing medicine today,” Minkoff said. “This poses incredible opportunity to cure disease.”

But Adomanis quickly jumped in with a clarification of the frequently mistaken Bush administration’s position, arguing that fetal stem cells were neither a panacea nor an immediately viable source of new cures for disease.

“Adult stem cells are the most promising and have yielded the best results today,” said Adomanis, who is also a Crimson editor. “It’s not as if over in the Science Center we have cures for Parkinson’s Disease cooked up ready to go once Bush is kicked out of office.”

Breaking with the formal speech pattern rigidly followed at first—an argument followed by one rebuttal, then a new question—the two sides went back and forth several times over the merits of the continued U.S. presence in Iraq, reaching as little consensus as their candidates.

“The majority of Congress voted to go to Iraq at the time,” Ayers said in response to Minkoff’s oft-repeated argument that the premises upon which the war was based proved false. “I know it’s cliched to say, but John Kerry had the same intelligence as George Bush, and he voted to go to Iraq.”

Topics were not quite so serious throughout, however, and the tone of discussion took a marked turn once audience members’ questions were read by Nowinski.

Ranging from whether Bush or Kerry would make a better teammate to why the Bush administration never accounts for its mistakes, the subjects raised by teammates in the crowd often prompted laughter—if not the most insightful arguments—from the speakers.

When asked whether any of them would vote for a Yale graduate, each of the six initially balked before Minkoff replied, “Kerry passed.”

“He was a scholar then,” Ayers quickly added.

But the high point for audience participation came on a question for Reese, whose teammates sat in support in the third row. Speaking of his opponents upon his arrival, Reese had promised he was “gonna get ’em.”

But his observant friends had the last laugh.

When Ayers attributed the rising cost of health insurance to skyrocketing premiums, he suggested that tort reform, advocated by Bush, is the preferred means of providing affordable coverage.

Perhaps unsure as to the term’s precise meaning, Reese leaned to one of his colleagues for a mid-round hint, opening the door for a follow-up question.

“Dylan, can you explain tort reform in detail for all of us?” Nowinski read, chuckling.

“I’d like to pass that question,” Reese answered, smiling at the audience.