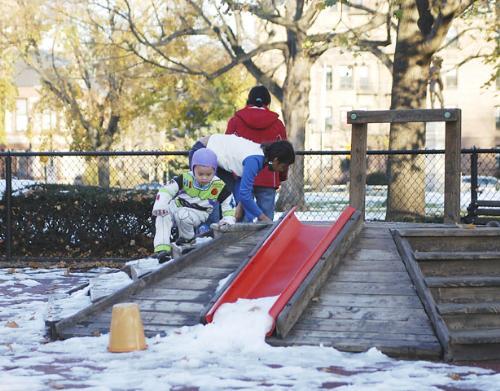 Long-standing complaints that children have found human feces, used condoms, needles and tampons in the Cambridge Common playground sparked the Cambridge City Council last night to look into a controversial policy that allows homeless people to leave their personal belongings in public parks.

“An unlawful use of the playground is trumping its lawful use by children,” said Millicent Stilwell, who said she has found not only trash but also bedding and bed rolls when she takes her daughter to the playground. Stilwell and other parents have undertaken a campaign of editorials and phone calls urging city officials not to let that policy endanger children’s health.

“I think it’s absurd,” she said. “In a day and age where you can’t leave a backpack in a public place like a post office or subway station, when all those places are questionable in the eyes of the law, why is a children’s playground not a questionable place to abandon these things?”

Cambridge Commisioner of Public Works Lisa Peterson said the issue of personal belongings has become wrongly “intertwined” with the problem of trash. Most of the items teachers and parents have complained about—feces, condoms, tampons, broken glass and even mattresses—are not considered personal belongings, Peterson said, so they are not covered by the city’s homeless policy. All of these items are considered trash and are thrown away when the playground is cleaned five days a week.

Even when the Department of Public Works does find personal belongings in playgrounds, she said, they are moved away from the children’s area.

“I cannot think of a time when we’ve left personal possessions in a tot lot,” she said. “What we find in a tot lot we clean as soon as possible.”

When police officers do find “personal belongings” such as backpacks and personal papers, they affix stickers warning owners that their property will be discarded if not removed within 48 hours.

The resolution at last night’s meeting, which was presented by Vice Mayor Marjorie C. Decker, requested that the City Manager “confer” with Peterson about these procedures and “report on the City’s policies and protocols for handling property of the homeless, including at the Cambridge Commons.”

Gerlinde Hossain-Endl, director of Bigelow Cooperative Daycare, a daycare center close to the Common, said that the playground is “really popular with neighborhood kids. It’s the central park in Cambridge.”

Teachers at the center bring children to play there when weather permits. Jennifer Ering, Bigelow Coop’s assistant director, regularly takes groups of children to the playground and says she worries that the many tourists walking through Cambridge Common get the wrong impression of the city.

“This is not a very good representation of what Cambridge is,” she said.

While children regularly encounter trash at the playground, she added, discoveries of more dangerous items are “more irregular but enough to be upset about.”

Hossain-Endl, Ering, and Stilwell all said they had been in contact with city officials, including the Department of Public Works, to complain about the state of Cambridge Common and the playground. But, they said, the problem has not gotten better.

“It’s been an ongoing problem, and over the past couple of years it’s gotten worse,” Hossain-Endl said.

She added that measures to protect the children’s health and safety should occur alongside measures to help the homeless.

“The concern is to keep the playground safe and find an alternative solution for drug users and homeless people,” she said.

Mayor Michael A. Sullivan echoed those sentiments at the meeting last night, saying that “the goal is both to secure the site as well as to be respectful to the homeless.”

Decker said the City Council will seek “extra clarification” regarding the current policy before making any decisions.

“The policy goes beyond the extra mile to protect everyone’s dignity,” she said. “But public health and safety has to be our first priority.”