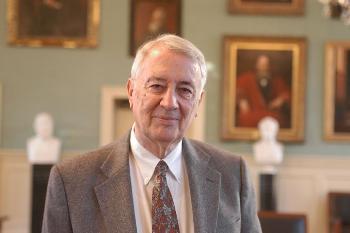 One faculty member gets the job of telling University President Lawrence H. Summers what to do.

The Parliamentarian, a faculty member who is selected by the Faculty Council, is responsible for making sure that the monthly meetings of hundreds of professors of the Faculty of Arts and Sciences (FAS) are run according to standard rules. From allowing the meeting to run just five minutes over schedule to permitting professors to make motions on the floor, the Parliamentarian is consulted before Summers gives the final word.

“The Parliamentarian, according to the rules, advises the president, because the president is the chair and ultimately rules on matters of order,” Kelly says.

In taking the Parliamentarian’s prominent seat next to the president, Kelly succeeds Roderick MacFarquhar, Williams Professor of History and Political Science, who says he occupied the chair for the past seven years. Now on leave, MacFarquhar decided to step down last year.

According to Andrea B. Goldstein, reference archivist at the Harvard University Archives, Kelly is at least the fifth Parliamentarian, a post that grew more prominent in the 1960s during faculty debates over extensive student political unrest.

Faculty meetings follow Robert’s Rules of Order, a 19th-century set of rules, with a few additions that were made specifically for Harvard Faculty in 1971.

The Parliamentarian can often sit through entire meetings without having to intervene.

“Most faculty meetings passed without my having to say a word,” MacFarquhar says. “In terms of actual procedural problems, most meetings proceeded without a hitch.”

But even when the Parliamentarian remains silent for a whole meeting, the job isn’t dull.

“I regularly attended Faculty meetings as a plain Faculty member, so I followed the course of the Faculty concerns and I did find that it was interesting,” Macfarquhar says.

In addition to directing the president on matters of procedure, the Parliamentarian is invited to meetings with Summers, Dean of the Faculty William C. Kirby, and a representative from the Faculty Council before each Faculty meeting.

“It gives you a chance to hear from the inside what the Dean and his colleagues are trying to do, and what they sense is the feeling of the Faculty,” MacFarquhar says.

A TALE OF TWO PARLIAMENTS

MacFarquhar had some unconventional credentials for presiding over contentious faculty debates on grade inflation, preregistration, and the University’s expansion into Allston.

“The reason I was chosen was that I had been in Parliament in England, so it was thought that I was a natural to be in this position,” he says.

“Most Parliamentarians [in England] are out to break the rules, and it’s the job of the Speaker of the House to make sure that they keep to the rules,” he says. “The reason I was chosen [at Harvard] was fairly obvious, though it was a mistake in some ways.”

MacFarquhar served as Parliamentarian under both Summers and his predecessor, Neil L. Rudenstine, and describes the different experiences working with each president.

“I think that Neil Rudenstine...was rather uncomfortable with the idea that someone on his right-hand side would tell him what to do in a pinch,” MacFarquhar says.

He says Summers, on the other hand, often consulted him on how to streamline parliamentary procedure to make Faculty meetings more efficient.

THE ROAD TO POWER

The Parliamentarian is selected at the beginning of each year by the Faculty Council, as indicated by the 1971 Rules of Faculty Procedure.

After a member of the Faculty is selected as a possible Parliamentarian, he is elected by the Faculty at their next meeting.

Professor of the History of Science Everett I. Mendelsohn says he believes Kelly’s personality explains why he was chosen as Parliamentarian.

“He’s a very responsible figure,” he says. “He has always been an active Faculty member.”

“Getting Tom Kelly, we will certainly get one of the most colorful Parliamentarians that I can remember,” he adds.

Parliamentarians fulfilled a particular function after the upheavals at Harvard during the late 1960s and early 1970s.

As larger numbers of Faculty members attended meetings and debated how to deal with student unrest, Faculty members likely looked to the Parliamentarian to keep things in order, he says.

“You get a special chair and don’t have to work very hard,” Kelly says. “The pay’s not very good, though.”