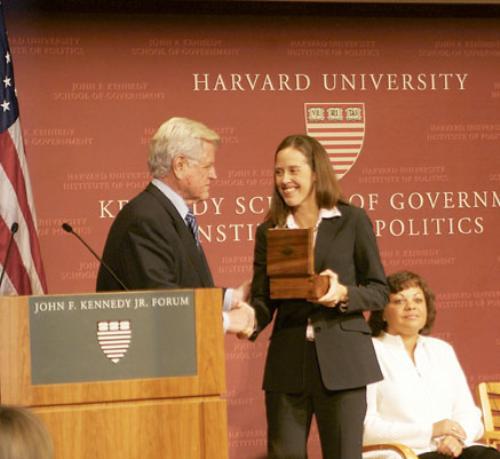 A Louisiana state representative and the founder of Teach for America were honored for their public service in education reform in a ceremony yesterday at the John F. Kennedy Jr. Forum.

The John F. Kennedy New Frontier Awards honor two Americans under age 40 who have made exceptional contributions in the realm of public service.

Presented annually by the Institute of Politics and the John F. Kennedy Library Foundation, the awards are inspired by the late president’s enthusiasm for public service, especially by young people.

The first award, which went to Louisiana State Representative Karen Carter, 35, recognizes an elected official whose work has been effective in overcoming public challenges.

The other award, which recognizes an individual who has made major contributions in community service or advocacy, honored Wendy Kopp, 37, the founder of the nonprofit Teach for America.

Speaking to the ceremony’s audience, Sen. Kennedy emphasized that his brother “was a great believer in young people.”

He noted the late president’s recognition of youth contributions to the Civil Rights Movement and to the war on poverty and suggested that “he would have understood the importance of young people in ending the war in Vietnam.”

Elected to the Louisiana state legislature in 1999 when she was 30 years old, Carter represents sections of her hometown of New Orleans.

She received the New Frontier Award in recognition of her efforts to enact legislation reforming the struggling school system of New Orleans.

Carter said receiving the accolade would motivate her to continue her work in public service.

“I will leave with this award, inspired to take on new challenges,” she said.

Her background in politics began when she was a young child.

“I lived in an atmosphere of public service,” she said, adding that her father was the first African-American elected tax collector for New Orleans and that her mother was involved in politics as well.

Carter said her family upbringing inspired her to work toward a “fair and just society.”

Kopp proposed her idea for a national teachers’ corps in an undergraduate thesis she wrote while attending college at Princeton University. The organization she founded, Teach for America, recruits young college graduates to teach underprivileged children in low-income areas.

For Kopp, much of the significance of the Kennedy New Frontier Award comes from the identity of the man whose name it bears.

“It’s an honor and a little humbling to receive an award in the name of a president who accomplished so much,” she said.

While she acknowledges the importance of foreign policy in today’s world, Kopp said her message to young people is that “there is so much more to be done here [in the United States] to make sure that America lives up to its promise.”

Kopp also said her work at Teach for America has shown her that people with leadership qualities can make a difference in low-income school districts, and she believes that by working to solve problems with education in the short term, committed individuals can effect long-term progress.

“There is a need for society to...commit ourselves to fundamental, systematic change,” she said.