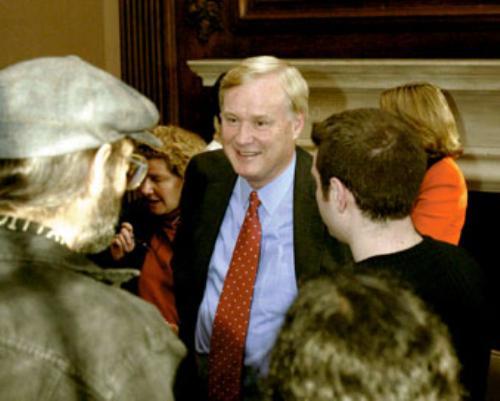 An Emmy Award-winning news anchor hosted an outspoken cable political commentator at her IOP study group yesterday. It was a high-powered husband-and-wife duo: Kathleen Matthews, anchor of ABC-7 in Washington, and her husband Chris, host of MSNBC’s “Hardball.”

Dressed in the television-friendly uniform of a black suit, blue shirt and red tie, Mr. Matthews fielded questions about the 2004 election and what it heralded for U.S. politics.

“I was profoundly disappointed that young people didn’t vote in this election,” he told The Crimson in an interview following the event. “But concert tickets and t-shirts don’t count at the end of the day.”

As to why John Kerry lost the election, he suggested both the candidate’s lack of “neighborly presence” and the seeming contradictions in his stance on the Iraq war.

“John Kerry didn’t flip-flop on Iraq, he hedged on Iraq,” Mr. Matthews said, referring to Kerry’s vote to authorize military action in Iraq but against an $87 billion package to fund it.

He said he was uncertain whether another candidate would have fared better against Bush in the general election.

The choice of candidate in the Democratic primary “would have been easier,” he said, “if Dick Gephardt were exciting.”

In 1974 Mr. Matthews ran unsuccessfully in a Democratic congressional primary in Philadelphia and went on to write speeches for President Jimmy Carter, but he has tried to remain politically neutral in his current job. Unlike other cable political shows such as FOX News’s “Hannity and Colmes” or CNN’s “Crossfire,” “Hardball” features a single host who does not advocate his positions on the air.

The Matthewses have been married for 25 years, and they say political discussions animate their home life as well as their professional lives.

“We have our sparks that fly,” Mrs. Matthews said after the event.

Her study group, called “Tower of Babble: The Search for News and Truth in the New Millennium,” has hosted speakers such as ABC News anchor Sam Donaldson, former CNN CEO and Chairman Walter Isaacson, and blogger Jeff Jarvis.

Following the event Mrs. Matthews said that Harvard students had changed her perception of her job over the course of the semester.

“The students reconnect you with an idealism you had going into your career,” she said. “They have challenged me to believe that I’ve got to go back and do a better job of what I’m doing.”