But Ohio may not be decided for another 11 days 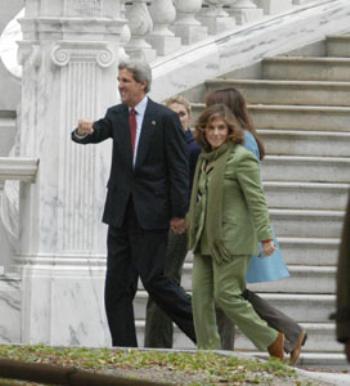 George W. Bush appeared to have been reelected President of the United States yesterday in a tight victory for the Republican incumbent.

But the campaign of John F. Kerry, the Democratic challenger, did not concede the election, and in a brief address to supporters in Boston’s Copley Square early this morning, vice presidential candidate John Edwards vowed to “fight for every vote.”

The election appeared to hinge on the results of voting in Ohio, where the President led by more than 140,000 votes at 4:30 a.m. with 99 percent of precincts reporting.

The Kerry campaign said roughly 250,000 uncounted provisional ballots in Ohio—cast by voters whose names did not appear on the election rolls—could sway the election in their favor.

President Bush appeared to have won a majority of the popular vote nationwide, but several states were too close to call with certainty early this morning.

An official victory for President Bush in Ohio would leave him with at least 269 electoral votes—enough to secure a second term with a tie-breaking vote in the Republican-dominated House of Representatives.

Republicans were poised to maintain control of both houses of Congress, though a resounding Senate victory in Illinois for Barack Obama, the charismatic Harvard Law School graduate, was a glimmer of good news for Democrats on an otherwise somber evening.

In South Dakota, John R. Thune declared victory over Tom Daschle, the Senate minority leader, at 4:20 a.m., though Daschle had yet to concede defeat.

Voters across the country turned out in seemingly record numbers yesterday for the culmination of a bitter presidential campaign which focused squarely on the incumbent’s war in Iraq. But while the war weighed heavily on voters’ minds, exit polls indicated they were equally, if not more, concerned with the economy and moral values.

Youth turnout was higher than in 2000 but not nearly as strong as many had predicted. Fewer than 10 percent of voters yesterday were 18 to 24, according to polls conducted by the Associated Press.

Kerry, the Massachusetts senator, easily picked up his home state with 62 percent of the vote. In Cambridge, where Kerry once launched his political career, 85 percent of voters cast their ballots for the Democratic candidate.

Mass Ave. stood eerily quiet last night as students crowded in front of TVs to watch results pour in from the rest of the country.

Early exit polls suggested Kerry could squeeze out victories in Florida and Ohio, where analysts had said the election would likely be decided. But the Square’s initial optimism waned rapidly as the night progressed, and Kerry supporters at the College headed back to their rooms befuddled and perturbed.

Members of the Harvard Republican Club, a vocal minority on an overwhelmingly liberal campus, celebrated their candidate’s apparent victory outside the Institute of Politics shortly after 1 a.m., when an election viewing party there shut down.

A cold rain began falling in the Boston area shortly after midnight as election returns continued to turn against Kerry in Florida and Ohio.

With the Boston Red Sox’s triumphant comeback fresh in their minds, Kerry supporters could hold on to the slim hope of a turnaround. But as the night continued to bode poorly for Kerry, with a loss in Florida and poor returns in Ohio, Democrats began to quietly concede defeat.

“If things turn out like they look like they’ll turn out,” said Andy J. Frank ’05, president of the Harvard College Democrats, “we’re just very disappointed.”

Results in New Mexico and Iowa were still unclear early this morning, and the Kerry campaign had not said whether it would request a recount of votes in Ohio.

The Bush campaign had yet to claim victory at 4:30 a.m. as the country braced for what could the beginning of a protracted legal battle akin to the 2000 election, when the outcome remained in doubt for more than a month.