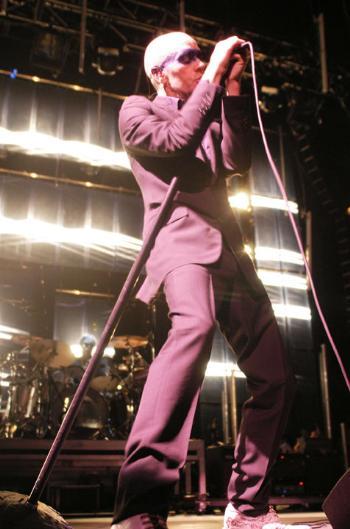 Oct. 29 marked the second Boston show in as many years for one of the last two decades’ most prolific and dearly-beloved bands: Athens, Ga.’s beloved sons, R.E.M.

Before the band took the stage, Scottish songstress Angela McCluskey opened at their Friday night FleetCenter show, a venue much more capacious and comfortable in the brisk autumn than their outdoor show last year at the Tweeter Center. McCluskey showed off her smooth and powerful voice on a handful of tracks from her debut CD Things We Do, and her band provided lush backing to her slightly raspy, occasionally soulful vocals. The performance set the stage for the rest of the night: behind the ethereal music and her slightly quirky vocals, the band rocked out, with her guitarist seeming even to borrow some moves from R.E.M. axe-man Peter Buck.

Now R.E.M. is past 20 years in the rock game, and while no one can escape the simple ware of age, R.E.M. still manages to do one thing with incredible energy, charisma, and ease: play a set of solid rock music. Though Michael Stipe took the stage in a conservative navy suit, he also sported a striking, blindfold-like band of blue eye shadow across his face. Whether the statement was spurred by fashion or politics is anyone’s guess, but in many ways, it proved irrelevant: Stipe performed the role of rock star to perfection, striking poses, affecting moves, getting up on speakers to let the audience touch him—yet remaining ever so far away.

Though Stipe’s face clearly showed the marks of age, he looked smart and alert, constantly taking in everything yet letting very little slip. The rest of the band took their cues from the frontman. They seemed to start off almost a little weary and subdued (leaving questions about the absence of Peter Buck’s signature guitar poses), but soon enough Buck himself was leaping in the air, and bassist Mike Mills was smiling beatifically beneath his ever-wilder hair.

The band opened with “Around the Sun,” from their new CD of the same title. While the album on the whole is a bit tired, in concert the title song sounded more immediate right off the bat—the guitars shimmered, Stipe’s voice grounded but not bored.

The song was immediately followed by “Finest Worksong,” from the band’s breakthrough 1987 album Document, which set the tone for the rest of the concert: hard-driving, drums pounding, political and aggressive. The crowd roared at the song, and when that segued into “Begin the Begin,” the the Begin,” the lights on stage flashed dramatically. During the chorus, with the stage lit white, Stipe even broke out his uniquely peculiar dance remembered most vividly from the “What’s The Frequency, Kenneth?” music video—limbs akimbo, body flailing, rapt in musical ecstasy.

R.E.M. continued in this fashion for a handful of songs, most of which were Document-era, with political commentary astute for the ’80s but searing today. During the new track “Animal,” Stipe seemed almost confrontational, striding across the stage and staring straight into the eyes of the audience. The band backed him up with a booming backbeat that seemed to replicate the heartbeat of everyone staring up at Stipe.

His rock-star moves were amusing, but during “Welcome to the Occupation,” Stipe dropped the posturing for a keen, insistent cry of “Listen to me,” instantly bringing the focus back to the music.

The band relieved the string of songs played for political sentiment and commentary with a few more songs from Around the Sun. With the strong presence of Mike Mills’s gorgeous, sweeping vocals on “Boy in the Well,” the song sounded powerful and sophisticated, and Buck’s melodic solo, which seemed routine on the CD, was a rousing climax in concert.

“The Outsiders” also featured a mood-setting guitar solo; the scratchy, dissonant distortions were extremely effective in echoing Stipe’s downcast lyrics. The lyrics themselves were still somewhat laughable at times, but their delivery was sincere and thoughtful; even Stipe’s rapping sounded credible. Later, the rendition of “I Wanted to be Wrong,” what Stipe referred to as the band’s “State of the Union,” was lush and sweeping, with a stage awash in red, white and blue.

However, even the immediacy of a live performance couldn’t save some of the tepid new album’s songs, such as “High Speed Train,” which sounded overwhelmed and impenetrable. Although the pounding drums added a sense of urgency to the song, Stipe’s voice was restrained and the song dense and sinister.

Stipe broke the somber mood with a dedication to the Red Sox. He did it with not just any song, but with the signature classic, “The One I Love.” The crowd went crazy, singing and shouting along to the subversive love song. The air was electrified, as the guitar’s reverb echoed and Stipe’s voice soared. At several points, Stipe even got down on one knee to serenade the audience, which drew bouts of loud cheering, leading directly into “Bad Day,” another crowd-pleaser whose energy drew more cheers and singing along. When Stipe took out a harmonica and played while smiling and dancing, the crowd laughed and danced right with him.

The energy remained high and the crowd ecstatic through “Imitation of Life” and “Final Straw” (which featured some wickedly driving, syncopated drums), and when Buck took out the mandolin for “Losing My Religion,” the crowd was singing every word, watching every move, and cheering every note. On the set closer “Life and How to Live It,” a true shoulda-been-a-hit from 1985’s Fables of the Reconstuction, the band went just a tad overboard, with the fiercely energetic boom of the guitars and drums drowning out Stipe and Mills’s murmuring vocals.

For the encore, Stipe came out in a personalized Red Sox jersey obviously drawing massive cheers from the Boston crowd. “What’s the Frequency, Kenneth?” kicked off the encore set, with the hyperactive Stipe leaping fitfully on the stage. He then removed the jersey to reveal a shirt reading VOTE, and the band dove into a somber, acoustic version of “Drive.”

Stipe, a vocal liberal, drew some boos for his next sartorial choice, the Kerry shirt he revealed underneath the Sox jersey. Unfazed by the mixed crowd, the band played their current single, “Leaving New York,” a grand, sweeping ballad that resounded in live manifestation.

The audience was treated to new material in their next encore choice, “I’m Gonna DJ,” an appropriately spirited and effervescent song, lit by the kind of flashing bright lights that could have set off any epileptics in the crowd.

The band finished with fan favorite “Man on the Moon,” on which Stipe openly invited the crowd to sing along, as if they hadn’t been doing so all along. Surprisingly, Andy Kaufman’s death elegy did little to sap the mood from the night: When the lights came up many in the audience looked completely shell-shocked by the two-hour set’s incessant energy.

One might think from R.E.M.’s recent CDs that the trio has softened in their old age, but live, they remind the audience that rock ‘n’ roll is in their bones, and that even dinosaurs like Stipe, Buck and Mills can still rock with the best of them.