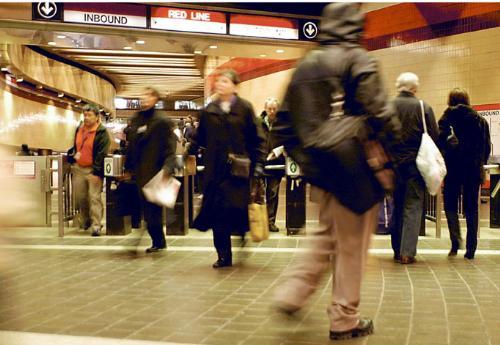 The number of reported crime incidents at T stations decreased by 17 percent this year, according to a Massachusetts Bay Transportation Authority (MBTA) report released last week.

The report—compiled from statistics for January through September this year—said that crimes against people at T stations decreased 15.6 percent to 593 incidents this year. Property crimes were also down, declining 18.6 percent to 529.

The Harvard T stop followed this downward trend. The number of incidents of assault, larceny, theft and robbery reported at the Harvard station declined from 14 in 2003 to eight this year.

While the overall data may be skewed by an unusually high number of offenses in 2003, T-station crime is still down 10 percent when compared with the average from prior years, according to MBTA crime analyst Mark W. Bachta.

“The change is not so dramatic,” in comparison to the years before 2003, said John A. Martino, deputy chief of MBTA police.

Assaults at all T stations have decreased by about 13 percent to 468.

And there were fewer robberies this year, dropping from 162 to 121 incidents. Both forcible rape and criminal homicide statistics remained constant with two crimes reported.

Martino speculated that heightened security in response to Boston’s hosting of the Democratic Convention over the summer may have led to the decline of crime in all T stations.

“Ridership was down because of traffic concerns in the week of the convention,” said Martino.

Santos G. Calderón, a custodial worker at the Harvard station, said that crime isn’t a problem at his stop.

“I have not seen it,” said Calderón, speaking in Spanish. “The police cross here more because of the school.”

Noel Diaz, who sells souvenirs at the Harvard station, agreed that things are, for the most part, calm.

“There are no fights,” said Diaz, also speaking in Spanish. “In general, everything is tranquil. It’s nothing like Downtown Crossing. In my three years here, I have never seen a fight.” Even the station at Downtown Crossing, further inbound than Harvard on the red line, experienced a decline with 43 reported incidents this year, 10 fewer than in 2003. And at the nearby stops at Park Street and Porter Square, crime also declined, while it remained constant at the Kendall/MIT station.

But the stop at Central Square, one station inbound from Harvard, broke with the overall pattern. While there were four reported incidents in 2003, 13 were reported this year.

Overall, reported incidents of both violent and property crime at red line stations declined significantly, from 341 in 2003 to 291 this year. On a typical weekday, the red line has 175,417 entrances, of which Harvard makes up 20,212, according to Bachta.

The green line also experienced a decline in crime, with overall incidents decreasing from 289 to 250 this year.

—Staff writer Robin M. Peguero can be reached at peguero@fas.harvard.edu.