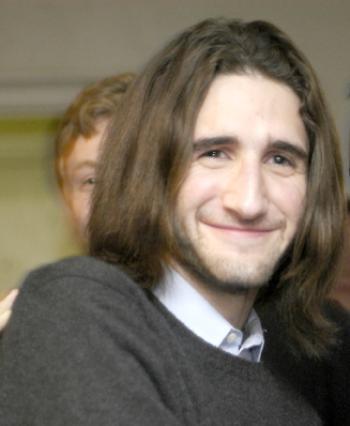 Matthew J. Glazer ’06 was declared the next Undergraduate Council president last night in an election that ended with an unprecedented split ticket and drew a record number of voters.

Glazer, who is chair of the Student Affairs Committee and a third-year council member, defeated the outside contender Tracy “Ty” Moore II ’06 by 452 votes after votes for third-place finisher Teo P. Nicolais ’06 were redistributed to voters’ second choices.

“I’m excited, but also disappointed that this is how it turned out,” Glazer said. “Ian and I will work together to do the best job that we can.”

“It’s a bittersweet victory,” Nichols said at his somber victory party, which was supposed to be for Moore, too.

In the final count, Glazer received 2,178 votes, while Moore received 1,726 votes over the four days of voting that ended at noon Thursday.

The Harvard Glee Club, dressed in black tie, traditionally serenades the winning ticket with a rendition of “Domine Salvum Fac,” in order to offer the president and vice president divine protection.

Due to the split ticket, the singers performed twice, first at Glazer’s party and later at Nichols’.

“It was difficult for the [Election Commission] to have to deliver results that weren’t happy for everyone,” Einkauf said. “It wasn’t quite as fun for us and it obviously wasn’t as fun for the candidates.”

Following the serenade to Nichols, Moore congratulated his running mate but expressed disappointment at his own defeat.

“At least we know there will be one good leader,” said Moore, adding later that the loss was emotional for him.

“I made a lot of sacrifices, and this has been an uphill battle the entire time.”

But Moore said he thought Nichols and Glazer would “be a great pair.”

Glazer is the third consecutive Student Activities Committee chair to win the council presidency; he and Nichols, who is vice chair of the Finance Committee have a combined six years of council experience.

About 120 Glazer supporters, including most of the council, gathered in the Eliot House common room of current Council Vice President Michael R. Blickstead ’05 to celebrate the election, yet the mood was bittersweet.

Capp said at the gathering that he would continue to strive for the platform goals of his campaign as a representative from Kirkland House.

“Matt being elected means our platform will be enacted,” Capp said. “I’m certainly going to be an active part of enacting it.”

Nichols said he planned on consulting with Moore closely during his vice-presidency.

“He’ll be my right-hand man,” Nichols said. “The good thing about this is Matt and I are going to feel obligated to bring both of our running mates’ ideas to the table and we’ll have a bigger pool of ideas to pull from.”

Capp said he was disappointed at his loss, but that he was optimistic that Nichols would be a successful vice president.

“He has a lot to live up to now, and I’m confident he will,” Capp said.

Glazer said he expects that his and Nichols’ first priorities will be to engage the student body in the Curricular Review and to improve the council’s structure.

“In terms of the presidential candidate, there was a clear choice from the beginning,” Mahan said.

Nicolais and Mannapperuma, who received 491 and 579 votes respectively, gathered in Lowell House Junior Common Room to hear the election results.

“Everyone should run for UC at some point in their Harvard career,” said Nicolais. “You make a lot of friends and learn a lot.”

Glazer and Nichols will assume their leadership roles on the council in February.

—Staff writer Liz C. Goodwin can be reached at goodwin@fas.harvard.edu.