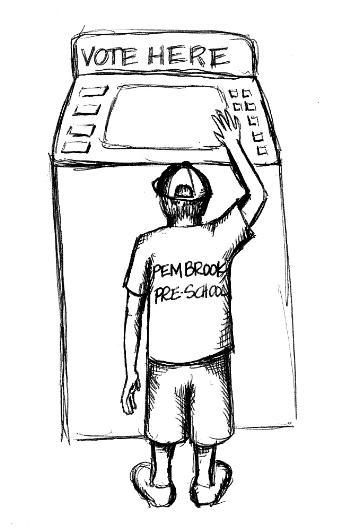 The evolution of democracy has been a long and, at times, painful process. In the last millennium governments of the people have managed to eliminate unjust voting restrictions based on race, property and gender. Now, we stand on the brink of true equality among the citizenry with only one obstacle still blocking the way: age restriction. According to the Twenty-Sixth Amendment, only American citizens who have reached the age of 18 years possess the inalienable right of suffrage. By disenfranchising the seventy million citizens under that age, we as a nation relinquish our claim to be a democracy or even a truly representative republic.

Intuitively, we, the established electorate, hesitate to grant voting rights to toddling babes and pubescent middle-schoolers, just as those with the vote have always looked down on those without. During the early twentieth century crisis concerning women’s suffrage, many skeptics clung to the beliefs expressed by Episcopal Reverend John Williams, who wrote that “God meant for women to reign over home, and most good women reject politics because woman suffrage will destroy society.” Eighty-five years after the passage of the Nineteenth Amendment, our society seems to have escaped the ravages once associated with the female vote, and in modern America the suggestion that only men should be allowed to vote would be deemed contrary to the spirit of precious freedom and democracy. Perhaps one hundred years from now, citizens will look back on our era and wonder at our hidebound refusal to enfranchise children, just as we now marvel at the outmoded beliefs of men such as Williams.

Cynics will argue that the case of child suffrage differs greatly from black or women’s suffrage and will question a child’s mental capacity to make an informed decision. Mental capacity is not, however, listed in our laws as a requisite for voting rights. Nowhere in America are citizens barred from voting on account of their sub-par IQs. Further, there is no test of a citizen’s knowledge about issues prior to voting. The democratic ideal is that all citizens of a nation deserve a vote, regardless of their perceived competence or wisdom. It is not up to some elevated intellectual group to decide national policy or who is worthy of suffrage. That would be called oligarchy. We are all subject to the laws; we should all be free to have a say in their formation. The elitist tendencies that suggest that children cannot vote are the same tendencies that once convinced people that blacks and women were unworthy.

It is often suggested that a child will simply mimic the voting behavior of his parents. In truth, however, even eligible adult voters are affected by the influence of their parents. According to the Center for Democracy and Citizenship, political discussion with parents is “the strongest predictor of a range of young adults’ attitudes.” Every voter is influenced by his surroundings, whether it be through friends, co-workers, family or the media. Yes, children’s views, like any person’s, will be influenced by those around them, but that does not change the fact that those are the children’s views, and in a democracy every opinion should be counted.

Of course, some will contend that it is foolish to think that a baby who cannot speak, write or pull a lever can vote, but along the same lines, a catatonic adult is not able to vote either. Again, the distinction of a truly acceptable vote is not the age of the voter, but simply the voter’s ability to cast a ballot. Also, it should be noted that every four-year-old child will not be shoved into a polling both and forced to deliberate in elections. All I am suggesting is that those few children who independently take an active interest in the governing process before the sacred age of 18 should not be denied the right to participate in democracy.

In addition to promoting the society’s overall sense of justice, the rise of child suffrage will lead to tangible gains. Importantly, the trend of political apathy in the young adult age group will be reversed. The fact that citizens in the age group 18-24 vote in such weak numbers (only 32 percent in 2000) should not be surprising given that we essentially teach children not to think about politics for the first 18 years of life. By teaching a child to think about and have a voice in the status of society and government from the beginning of his education, we will foster in him or her both a respect of representative republicanism and a sense of efficacy, which modern youth are sadly lacking.

Thus, the advent of child suffrage will promote democracy in two important ways, revitalizing efficacy in the currently under-represented young adult and eliminating the last artificial barrier that remains between citizens and truly free and fair voting procedures.