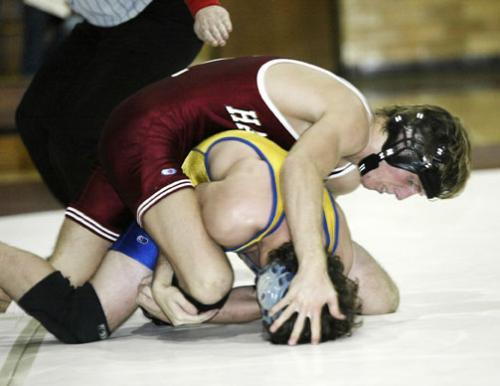 Sophomore Robbie Preston, wrestling at 125 lbs., orchestrated one of only two Crimson victories against Hofstra on Friday. Preston won his match 6-4 on a decision.
By John Hastrup, Contributing Writer

Harvard’s young wrestling team showcased the “mindset of fighting” in Friday’s season opener for team competition against Hofstra, according to junior team captain Mike Baria. Unfortunately for the team, such a mentality was not enough to prevail over the No. 8 Hofstra Pride (3-1).

In a meet that saw the Crimson (0-1) win only one match by decision and one by forfeit in a 39-9 loss, Harvard head coach Jay Weiss acknowledged that the team “didn’t look [its] best” in the home opener, but noted the difficulty of going against a top team so early in the season.

The Pride, which has seven nationally ranked wrestlers in its lineup, faltered at the start but closed with near-perfect form to achieve its commanding victory.

A forfeit win and a victory by decision over the Pride in the first two of 10 matches allowed the Crimson to quickly jump to a 9-0 lead.

Heavyweight standout sophomore Bode Ogunwole racked up six points against the Pride when his opponent freshman Gian Villante chose to stay out of the match due to a hurt elbow he had sustained in an earlier meet.

Weiss said he was disappointed that Ogunwole, perhaps Harvard’s best wrestler this year, was unable to demonstrate his talent. The crowd—which numbered about 100—echoed his sentiments, loudly sighing when the referee raised Ogunwole’s hand in victory.

The next match between sophomore Robbie Preston and Pride freshman Dave Tomasette (125 lbs.), however, brought considerably more excitement to the mats.

Preston trailed 3-2 at the end of the first period as he withstood an early takedown and an illegal hold call. In the second period, he tied the match 3-3 with an escape before securing a 6-4 match victory—and three team points for the Crimson—in the final period.

Preston’s performance was especially impressive in light of the fact that the wrestler was sick the entire week prior to the match, Weiss said.

Preston accepted his victory but noted that he has “a lot of work to do.” Last week at the Cliff Keen Invitational, Preston defeated the very same opponent in Tomasette by a score of 9-1.

Following Preston’s victory, though, Harvard struggled to keep pace with the overpowering Pride. In the final eight matches Hofstra won three with pins, two with technical falls, two major decisions and one decision.

Hofstra head coach Tom Ryan noted the intensity with which his team just “came out and wrestled tonight” against the Crimson in spite of a 4 p.m. victory against Boston University that same day.

Heading into Cambridge, the Pride was also coming off a key victory over then-second-ranked Lehigh on Nov. 28 and third place finish at the Cliff Keen Invitational.

“It’s hard [this year] because we’re a young team,” Baria said. “Tonight we just wanted to see guys fight each position and they did.”

The prospects for the Crimson, however, remain very much in the air during this rebuilding season.