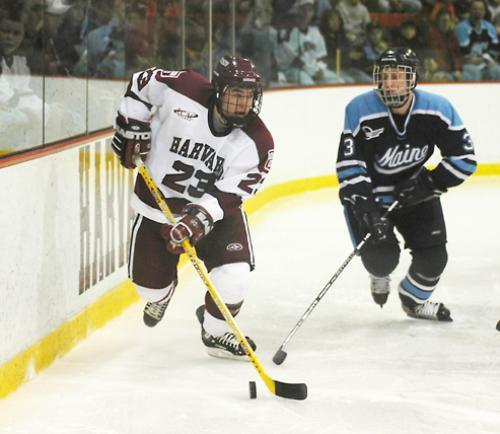 Freshman forward Mike Taylor was not around to witness the Crimson’s collapse to Maine in the NCAA tournament last season.
By Timothy J. Mcginn, Crimson Staff Writer

This time, there would be no collapse.

Sure, there were parallels between the first round of the NCAA tournament and its subsequent rematch entering Saturday’s third period. Harvard led by three—3-0 this time, not 4-1—due in large part to its play with a man advantage. Maine goaltender Jimmy Howard had surrendered a few fat rebounds, two of which the Crimson had poked home. The No. 11 Black Bears, while peppering Dov Grumet-Morris, had earned few quality scoring opportunities.

But unlike a season ago, when Harvard’s showing through two periods resembled no other performance turned in all year, the Crimson’s whipping of yet another Hockey East power this weekend was, for lack of a better description, simply more of the same.

On both occasions, Harvard crashed the net with a sense of purpose, deflecting pucks, blinding Howard and manufacturing so-called garbage goals. Months ago in Albany, that strategy was in large part successful because it was so uncharacteristic of the Crimson offense, which rarely swarmed the goal at all, and never with such vigor. Maine simply hadn’t been prepared for that attacking style, but adjusted as the game wore on, en route to its improbable 5-4 comeback victory.

It would be hard to imagine that the Black Bears weren’t prepared for Harvard this time. The Crimson has, after all, notched few breathtaking tallies this season, relying on its forwards to fight for position around the crease and tap in second chances, not overwhelm defenders with spectacular individual efforts. Its two power-play units in particular have poached several scores that just months ago would have resulted in yet another unsuccessful shot on net.

But, as then-No. 1 BC, then-No. 10 BU and No. 10 Vermont can attest, advanced knowledge of that change in attitude doesn’t make stopping it any easier.

Less than five minutes into the game, Harvard had already battled its way to two point-blank chances from just beyond Howard’s crease, converting on the second to earn a 1-0 lead. On that tally, which slipped out of a cloud of skaters in front of the net, junior Charlie Johnson fought for two or more rebound whacks that found Howard’s pads, while freshman Jon Pelle, the initial shooter, managed at least the one that crossed the goal line.

“We’re getting guys to the net and getting our shots through,” said Johnson, who was awarded an assist on the goal. “Our puck movement could improve, but we’re getting good screens, good tips and rebounds.”

Throughout the exchange, Maine’s defenders futilely tried to dislodge the Crimson skaters from their posts out front. They would have little more success as the contest progressed.

“We didn’t help our goalie at all,” Maine coach Tim Whitehead said. “Sometimes we screened our own goalie. They did a great job of wristing the puck in on the power play and getting to the rebounds. We didn’t.”

Not one of Harvard’s four goals was strictly clean—each was the result of either a screen, a deflection or a rebound, making Howard’s task doubly difficult. The fourth and final tally he surrendered was itself the product of a brilliant toe save that his blueliners failed to corral, allowing Johnson to flip home the rebound for the Crimson’s third power-play goal.

Grumet-Morris on the other hand, while tested more frequently than Howard, was aided by his six NHL draft pick defensemen, who again saw to it that congestion in front was minimal, breakaways were few and dangerous rebounds were virtually non-existent. The overwhelming majority of shots he faced were fired from just inside the blue line and beyond the faceoff circles, ensuring he would have a view of the shot and room to breathe when making his 39 saves.

Not so when he last stood between the pipes against the Black Bears. During their third-period run in the tournament, Maine’s skaters effectively clogged the goalmouth, preventing him from seeing either the tying or winning goal—the former was redirected off a skate, while the latter snuck by as Grumet-Morris’ vision was obscured.

Though they allowed two breakaways in quick succession with 13 minutes to play, Harvard’s blueliners forced Maine to the boards this time, where the Black Bears safely dithered away much of the remainder of the third period. And, when tested as on those two odd-man rushes, Grumet-Morris was spectacular, coming within 1:08 of recording his first shutout of the season while improving his goals-against average to 2.00 and his save percentage to .935, second-best in the country.

“I thought [Grumet-Morris] did great whenever he was tested,” Whitehead said, “but I thought they did an excellent job of giving him chances to succeed.”

Which is what separates the Crimson now from Harvard then. Grumet-Morris often succeeded last year, particularly early on, despite the odds stacked against him and the lack of help he received. And the Crimson offense, while at times effective, languished for much of the season.

Now, though, Harvard’s offense manufactures goals rather than waiting for them to materialize, while its defense punishes even the best of its opponents who attempt to screen Grumet-Morris, instead of succumbing to their pressure. And it’s that mentality, that attitude, that has the Crimson’s opponents thinking that they won’t be the beneficiaries of a collapse this season.

“They’re going to win a lot of games this year,” Whitehead said. “They’ve been to the tournament three years in a row, and this year looks, certainly to me, like the fourth year in a row. I’m just very impressed with their team.”