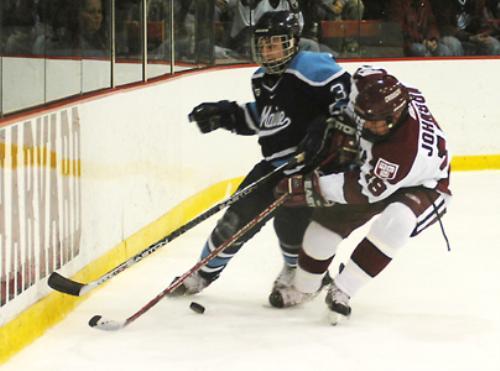 Junior forward Charlie Johnson had a goal and an assist in Harvard’s 4-1 win over No. 11 Maine on Saturday.
By Rebecca A. Seesel, Crimson Staff Writer

Charlie Johnson wasn’t quite sure what to say in the postgame press conference. He had knocked home one goal and assisted another, helping the Harvard men’s hockey team down No. 11 Maine. But had he brought “the jam,” asked a reporter, echoing the year-old truism that has come to be associated with Johnson’s better performances?

The saying harkens back to last season, when then-coach Mark Mazzoleni announced that Johnson was capable of great things if he would only “bring the jam.”

Saturday against the Black Bears, Johnson did, indeed, bring the jam. The centerman has impressed of late, earning at least a point in the Crimson’s last three performances, but in his effort against Maine, Johnson perfectly epitomized Harvard’s offensive strategy that has been so successful.

Just 4:06 into the first frame, Johnson was in perfect position to wrist in a rebound of freshman Jon Pelle’s shot on goal. But Maine goaltender Jimmy Howard stoned Johnson, and several Crimson sticks chopped at the puck before it was finally lifted top-shelf for the goal.

“We’re always trying to get in front of the net there,” Johnson said, adding that his team’s current success has been the result of “getting shots through” and “getting guys to net.”

Johnson was initially credited with the goal, though a scoring change gave the ultimate nod to Pelle, while Johnson ended up with the assist. When asked how many shots he took in the fray around Howard’s net, Johnson laughed.

“I actually thought I scored it,” he said with a smile, “so I would say at least two.”

A bit under 49 minutes later, though, as Harvard neared the completion of its third period of aggressive, crash-the-net play, Johnson tallied a goal nobody was going to take away.

Dan Murphy raced the puck down the ice, feeding it left to Kevin Du as the pair streaked towards Howard in tandem. Du quickly shoveled the puck back to Murphy, who blasted a shot towards the net. This series of movements took only seconds, but somehow, the Maine netminder blocked the puck.

But Johnson was there again, in the right place at the right time, ready to punch home the rebound and give the Crimson a 4-0 advantage with less than eight minutes remaining.

Black Bears coach Tim Whitehead alluded to Harvard’s penchant for second and third chances as a major factor in the contest, and it was, of course, the result of all five skaters sensing their positions and understanding their teammates.

Said Johnson, “We’ve got a lot of flow going in our game, just chipping along the wall, a lot of skating. And that’s what most of the guys on this team do well—skate and make plays.”

The first period of play on Saturday night saw only four whistles, a pair of which were matching, two-minute minors against the Crimson’s Steve Mandes and Maine’s Jon Jankus for roughing after the whistle. So in the first 20 minutes of play, just two power plays were awarded, neither of which led to a goal.

The next two periods were something of a circus, though, as 20 calls, 13 power plays and 56 minutes of penalty time were dished out.

In the last 40 minutes, there was never a stretch of five without a whistle.

Eleven different minor infractions were called—hitting from behind, hooking, interference, obstruction-hooking, obstruction-holding, roughing after the whistle, roughing, holding, slashing, tripping and holding the stick—as was a 10-minute misconduct on the Black Bears’ Derek Damon.

And while both teams amassed 12 penalties each, there was one glaring difference when the finals seconds ticked off the clock: Harvard had struck for three power-play goals in seven opportunities, while Maine had gone just 1-for-8.

“Three [goals] to one on power plays—that was the difference,” Whitehead said.

During its current, five-game win streak, the Crimson has only once held an advantage in shots on goal: this past Tuesday, when Harvard outshot Vermont 30-23.

In the other four games—against Clarkson, Union, RPI and Maine—the Crimson has been outdone by an average margin of almost 12. Since Harvard last lost, it has managed 47 first-period shots on goal and has jumped out to an early, first-frame lead four of the five times.

The shots have fallen off slightly in the second and third frames—39 and 36, respectively—as the Crimson’s opponents have made late-game pushes and, at times, caught Harvard on its heels.

Still, Crimson coach Ted Donato ’91 is more than willing to take the bad side of the shot differential if it will still translate into five straight victories.

He indicated as much after last weekend’s RPI matchup, in which the Engineers outshot Harvard 26-15 and limited the Crimson to just three in the final frame. Harvard won, 2-1.

Pelle led his team Saturday night with seven shots—three more than his closest teammate, senior Andrew Lederman—six of which came in the first period...Sophomore blueliner Dylan Reese earned two assists against the Black Bears, bringing his season points total to nine. He now sits in a fourth-place tie with forward Brendan Bernakevitch on the team points list, topped only by Lederman, Pelle and assistant captain Tom Cavanagh—all three of whom skate on Harvard’s top power play unit...The Crimson continued its stifling defensive efforts against Maine with 22 blocked shots, many of which came on the 7-for-8 penalty kill...Though he still leads his team with 16 penalties—his nearest teammates have been whistled six times—captain Noah Welch has amassed only four penalties during Harvard’s five-game winning-streak. On Saturday night, he was even seen breaking up a mid-ice fight.