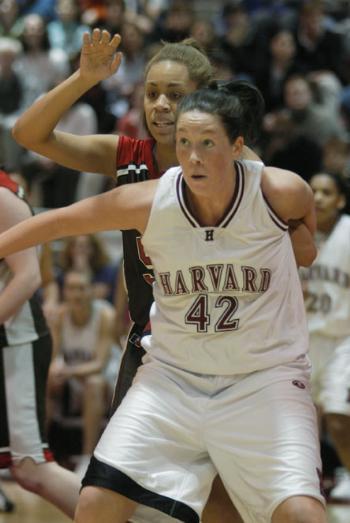 Junior forward Kate Mannering, shown in earlier action, shot 8-of-12 for a career-high 18 points while filling in for an ailing Reka Cserny, the Crimson’s usual offensive mainstay.
By Alex Mcphillips, Crimson Staff Writer

It wasn’t enough that forward Kate Mannering shot 8-of-12 for a career-high 18 points in Saturday night’s effort.

She also led the team in stitches—she had five, just over her upper lip—as well as head bumps, swollen noses and vanished contact lenses.

It was indeed a banner night for the junior from Vienna, Va., who brushed off near-constant assault and furiously led the Crimson to victory.

“I’ve been getting hit on the head all the time now,” Mannering said after the game, laughing.

“It actually fired me up. I was like, man, these girls are hitting me in the head, and I can’t catch a break. That just got the juices going.”

Mannering filled an offensive void created by the benching of senior center Reka Cserny, out because of a sprained ankle suffered Wednesday against Northeastern.

Her prowess for executing high percentage shots gave the Crimson a big lift when sloppy first-half play threatened to drag down the team.

At times, Mannering took over the game.

“I was worried she would be a little gun-shy,” coach Kathy Delaney-Smith said of the banged-up Mannering. “She wasn’t shy. I thought she played great.”

At 15:32 in the first half, a ball squirted loose at the Central Connecticut State free throw line and Mannering directly collided heads with Blue Devils guard Denee Burgess on the ensuing scramble.

She remained down for a few seconds and left the game.

That wasn’t all that Mannering would accomplish.

“She’s a player that plays within her speed,” Delaney-Smith said. “And that’s what you do against [an athletic CCSU team]. You don’t try to out-jump them, or out-quick them. You box out, you execute, you use and set screens well.”

“Having Reka injured is a big downer for us,” Mannering said, “but we just pulled together as a team.”

Delaney-Smith said it was an easy call to bench the three-time All-Ivy center.

“It shouldn’t affect us,” she said. “I’ve sat Reka in games at crunch time. So this team knows that, as much as we love Reka, it’s not about one player.”

Cserny did not appear to be worried about her ankle, saying she would try to practice today to prepare for tomorrow’s game against Boston University.

Guard Kyle Dalton, a sophomore from Tucson, Ariz., had a career night, scoring 7 points on two threes and providing a visible emotional boost in the second half.

The Crimson entered halftime flat-footed, with a three-point lead and 11 first-half turnovers to its credit.

Dalton responded with verve, stemming the Blue Devils’ last 4-0 run on a late three, which gave Harvard a comfortable 51-38 lead. Her clutch shooting energized Delaney-Smith and the Crimson bench.

“One of the things we were trying to get Kyle to do was be comfortable and instinctive with the system,” Delaney-Smith said. “And she’s doing that now, and if we can continue to keep her that way, then she’s going to hit lots of threes for us. She’s one of our best three-point shooters.”

Dalton said she was glad for the playing time.

“I think definitely we all get excited when someone who doesn’t play as often gets in,” Dalton said, “and it’s exciting when they play well, too.

“I was happy that my teammates responded to that.”

In the second half, Harvard blitzed the nets on 60.9 percent shooting, including 50 percent from three. That padded the Crimson’s insurmountable position.

“We settled down and let our game come to us,” Dalton said.

—Staff writer Alex McPhillips can be reached at rmcphill@fas.harvard.edu.