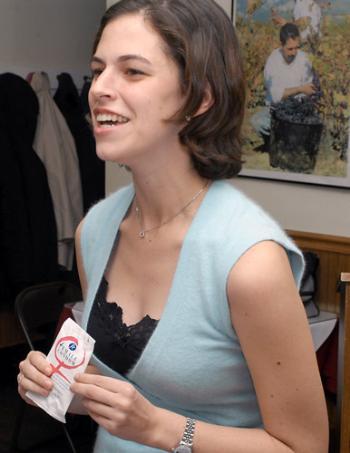 Her freshman year, a fifth-grade CityStep student called Abby L. Fee ’05 “Bubble Butt”—and she laughs about it today. A
By Alexandra C. Wood

Her freshman year, a fifth-grade CityStep student called Abby L. Fee ’05 “Bubble Butt”—and she laughs about it today. A Social Studies concentrator living in Adams House, Fee is known more for her involvement in many organizations on campus than for her posterior.

Following her graduation from high school, the Georgia-native took a year off, during which she interned for a mayoral campaign, participated in an Outward Bound program and spent a semester at sea.

Once Fee arrived at Harvard, she delved into a myriad of extracurricular activities. A CityStep teacher throughout her four years at Harvard, she served on the executive board during her junior year. “CityStep sucks you in,” Fee acknowledges, “but it’s great to have a diverse group of people who become so bonded.”

CityStep isn’t the only activity that has bonded Fee to others—she first met her boyfriend, John P. Blickstead ’06, through the On Thin Ice (OTI) improv comedy group.

Blickstead says that he found Fee “magnetic and attractive” after seeing her perform in OTI. “She’s spectacularly funny,” Blickstead says. During her sophomore and junior years with OTI, Fee served as co-president.

“She’s awfully witty and brings a distinct brand of humor—very personalized, self-deprecating and not afraid to laugh at herself,” says CityStep director Michael A. Kalin ’05.

A summer internship at the Planned Parenthood Federation of America in Washington, DC inspired Fee to revive the Students for Choice movement here at Harvard. Students for Choice creates a dialogue and awareness about volunteer opportunities through education and outreach, she says. She served as president during her sophomore and junior years, and she is currently treasurer.

The summer following her sophomore year, Fee traveled with a volunteer organization to Ho, Ghana, where she hosted a radio show about HIV/AIDS.

“I’m just obsessed with the idea of taking everyone to Ghana,” Fee says. “I was definitely the white lady in town, but everyone was so friendly and welcoming.”

While in Ghana, Fee also shadowed a nurse at a reproductive clinic, which was the inspiration for her senior thesis topic on reproductive behavior and family in the African nation.

Fee says that she spent three years being frustrated with women’s community building on campus, mostly because of the general lack of a student center or a women’s center. This year, a friend on the Seneca executive board sparked Fee’s interest in the organization. Although she only recently got involved with the organization, Fee sees the benefits of creating a women’s community here at Harvard: “There should be fifteen Senecas on campus.”

Although her thesis is currently occupying most of her time, Fee is planning for the future. Immediately following graduation, she would like to teach or work for a non-profit organization. Further in the future, she plans on working for a women’s advocacy organization.

“She is going to make my life very difficult,” Openshaw says.