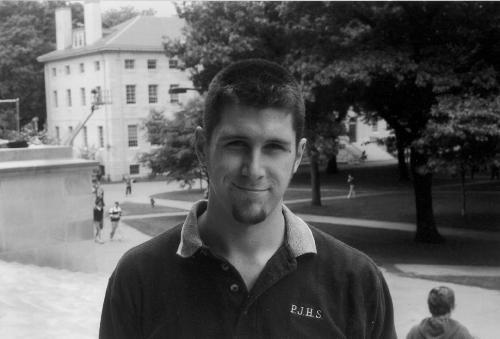 Bringing All the Readers to the Yard

Best-selling author William Martin ’72’s latest novel is called Harvard Yard, and his research was first-rate —he was writing about
By Kristi L. Jobson

Best-selling author William Martin ’72’s latest novel is called Harvard Yard, and his research was first-rate —he was writing about Harvard just as son Dan F. Martin ’04 was living through it.

Martin is known for epic, century-spanning novels that combine historical events with a seductive mystery. Harvard Yard spans 400 years, following fathers and sons as they experience Harvard. But this newest novel bridges the generational gap in more ways than one.

The author and his son are lunching at Grafton Street, discussing the novel that has shaped each of their perspectives of Harvard. The quintessential Irish Catholic Bostonian, Martin’s roots have been good to him, serving as muse for three novels that each chronicle the development of Massachusetts.

Though he has received mixed critical reviews, Martin’s novels are widely read—he’s been on the New York Times bestseller list three times. The author readily admits that he is not aiming to pen the next great American novel. “My job is to write books people stay up late reading,” Martin says.

With Harvard Yard, Martin’s work has taken a more personal turn, using his reflections on Harvard and his son’s current experiences. A couple of years ago, father and son started thinking seriously about Harvard; Dan was filling out his college application as William was researching a setting for his next novel. Ultimately, both decided on Harvard. “It was the seed of learning that created a generation that, in the Northeast, created the American Revolution,” says Martin. “Really, what location is more legendary?”

Harvard Yard follows generations of the fictional Wedge family from 1636 to the present day as they guard a missing Shakespeare play, Love's Labours Won. The novel postulates that William Shakespeare gave Robert Harvard a handwritten quarto. Harvard is the father of John, and thus the play—and the novel’s setting—make their way to a fledgling New England college. The play falls into the hands of one of Harvard’s first students, Isaac Wedge.

During the college’s early years, the Wedge family tries to hide the play from book-burning Cotton Mather types. Centuries later, the Wedges attempt to unearth the missing play, hoping to sell it and build a residential Wedge House. Antique bookseller Peter Fallon, the main character from Martin’s 1980 novel Back Bay, ties the narrative together as he helps the modern day Wedges on their search.

Martin put in months of research for the novel, both in the library and auditing Reverend Peter J. Gomes’ “History of Harvard” course. His work pays off in the historical details that make Yard so captivating, like early students trudging across the yard in the snow to use outhouses, and President Eliot giving the crew team crimson neck ties—giving Harvard teams a name.

“I like to look at the evolution of a place,” Martin says. “I take events in history and see how they would affect the characters.”

His fictional creations mingle with some of the most prominent names in Harvard history. John Winthrop comes off as a humorous mad-scientist type as he encourages the use of newfangled microscopes, Elizabeth Cary Agassiz campaigns for a women’s college and Joe Kennedy looks longingly up at the Porcellian Club he can never join because of his Catholic background.

Not So Long Ago

Though he’s written about everything from servants on the Mayflower to the career of George Washington, Yard marks the first time Martin has ever written about an event he was present for—the 1969 student takeover of University Hall. Like character Will Wedge, Martin was a freshman at the time.

“I tried to take myself back to some of the most dramatic stuff I’ve lived through,” Martin reflects. “There was constant rebellion in the air. The calm of today didn’t exist.”

Martin employed an old friend and Harvard classmate to help with research for the novel—Conrad Wright ’72, the director of the Massachusetts Historical Association.

“We were the only ones who got up for breakfast in Kirkland House,” Martin says of their long friendship.

Among other tips, Wright pointed him to the fact that William Shakespeare and Robert Harvard lived within blocks of each other in Stratford-on-Avon.

While at Harvard, Martin concentrated in English and directed several student productions. After graduation, he headed to University of Southern California School of Cinema-Television to study moviemaking. While he waited for his big directorial break, he began to write B-movie horror flicks, including the little-remembered “Humanoids from the Deep.” His pet projects, though, were his historically-themed screenplays.“Everyone who’d look at them would tell me, ‘You ought to write a novel,’” Martin says.

Martin began to write Back Bay, chronicling the fictional Peter Fallon’s quest to find a missing Paul Revere tea set stolen from the White House. Martin set up his now routine past-and-present structure, bringing the reader from 18th-century Boston to modern day chapter by chapter, chronicling six generations on their hunt for the missing silver. The book ends with an appropriately cinematic touch—Fallon blowing a hole into the side of a T subway tunnel to reveal a cache of hidden silver. “I thought, as I still do, as a screenwriter,” says Martin. “And it managed to succeed in a way first novels aren’t supposed to.”

Back Bay made the New York Times bestseller list—and made the 29-year-old Martin a rising star. Twenty-four years later, the book is still in print.

Many of Martin’s other novels, including Cape Cod and Annapolis, follow a similar formula, with generations of a family connected together by the search for a lost treasure.

For a Harvard student, reading Martin’s latest offering can feel eerily familiar and unique. There’s the Harvard of yore—Harvard freshman dormitories filled with revolutionary war soldiers and tutors beating students for not reciting Latin correctly. But from modern scenes in Emerson 105 to over-chipper Crimson Key tour guides in the yard, Martin captures present-day Harvard College exactly as a student might describe it.

Much of that may have to do with Dan, who frequently took his Dad to classes and to meals at Lowell Dining Hall while the novel was in progress. The younger Martin also took pictures of the Yard to aid artist Wendell Miner in creating the cover design.

Dan also might have inspired the character of Jimmy Fallon, Peter’s teenage son, who is applying to Harvard as his father scours the campus for the old Shakespeare quarto. By the book’s epilogue, Jimmy Fallon is a freshman in Hollis—Dan Martin’s former dorm.

“He’s a little monosyllabic,” Dan says doubtfully. “I hope I didn’t inspire him.”

Like his father, Dan’s eye is on film—he’s writing his English thesis on John Ford and is currently applying to production programs at various film schools. “I know it looks like [we’re] exact copies, but we really go about it in a different way,” Dan says of he and his father’s paths from Harvard to Hollywood.

Following lunch, father and son are off to Blockbuster.