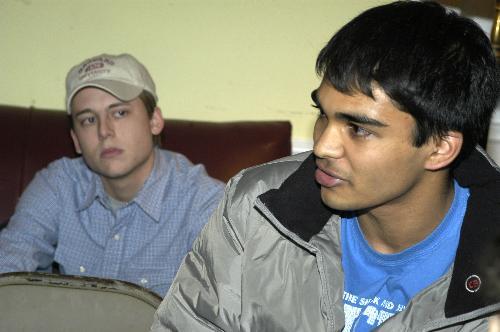 A small collection of students gathered at the Kirkland House Senior Common Room last night to discuss the core curriculum and potential changes in the College calendar with the administrators who are leading the College’s curricular review.

In the first of 12 open meetings that will take place this spring, the 15 students sat to talk with Dean of the College Benedict H. Gross ’71 and Associate Dean of the College Jeffrey Wolcowitz, two of the three top administrators charged with the oversight of the review.

The core curriculum and the changes to the college calendar have been the focal issues of meetings of the curricular review committees in recent months, but students also raised concerns about language citations, advising and excessive pressures on first-year students.

The conversation started off slowly as students trickled in with trays of food and voiced their concerns with some hesitation.

“I guess the first thing I’d say is that I don’t like the Lit B core,” he said.

Eddleston’s comment sparked a 20 minute-long discussion of the core curriculum, whose merits have been debated among both students and professors at the curricular review committee.

“The usual expression I hear about the core is that I love all the courses in the core, but I hate the core, which I usually interpret as I hate manipulating all of the regulations of the core...but in the process of manipulating the core I get a few good classes,” Gross said.

Several students said they felt core courses tended to be considered a a low priority by classmates.

“Everybody in core classes is going to be non-concentrators, or people who don’t care,” said Gopal Sarma ’05, a math concentrator. “I think that should never be the case with courses you take in college.”

Some expressed interest in a system of distribution requirements, similar to those in place at Yale and Princeton, in which students can choose to take departmental courses or special core curriculum courses.

But Gross pointed out that there are administrative difficulties in the implementation of that kind of curriculum.

Wolcowitz, who now manages the curricular review and has over a decade of experience with curricular administration, raised the question of choosing concentrations later, or requiring 10 core classes with greater distribution and flexibility.

“Can we come up with a system that would generate the right kinds of courses, courses that departments would respect and continue to put their best professors forward to teach?” he asked.

Both deans said that the complexity of the curriculum, particularly the core, has led to problems in advising and pedagogy.

During the discussion, many students said the best advising they had had was within Kirkland itself, and not through their concentrations.

Kirkland HoCo Parliamentarian Arie Hasit ’05 said his 15-student concentration didn’t even know he was on campus this semester.

Others said that excessive requirements can frustrate students.

“I think having a lot of requirements makes a lot of problems for students,” said Lindsay Crouse ’06, the Kirkland HoCo Secretary. “Why not just let students pursue their own interests?”

Dean Gross said that though undergraduate requirements may be heavy—students often graduate at the level of second-year graduate students, he said—the curriculum should have structure.

“Unfortunately, my son goes to Brown,” Gross quipped, and the room erupted in laughter. “The curriculum there was designed by a student. We need to have some guidance by the faculty.”

While students complained about requirements for language citations and joint concentrations, several said the tutorial program was successful.

“I feel like it was the writing I learned in tutorial that was the most important,” said Zachary Z Norman ’04, who is also a Crimson editor.

Several students talked about pressure to choose concentrations to get good grades—what one student called an effort to “beat the curve”—tying the stress of the high-stakes atmosphere at Harvard to problems with mental health on campus.

Student opinion at the meeting was divided over an idea Gross pitched involving making all first-year courses pass-fail, like the system currently in place at MIT.

“I think that would be really good for the mental health of freshmen,” said HoCo chair Adam Kalamchi ’05. “The College could force students to really collect themselves that year.”

Some students said that increasing the flexibility of the curriculum—from requirements to grades—would encourage risk taking and make the College more satisfying for students.

Apart from increasing the flexibiltiy of the curriculum to encourage faculty-student interaction and risk-taking, the College calendar—which is currently under review—drew the most heated response.

At a meeting of the full faculty in December, the curricular review committees floated the possibility of moving winter exams before Christmas break and potentially adding a third term in between fall and spring semesters.

Gross said last night that the “J” term, consisting of a few weeks in January, could be used for internships, intensive courses or traveling abroad.

There were nods around the table.

All students present seemed to favor the idea of moving winter exams before Christmas break, even if it meant starting the school year earlier.

“I dislike reading period,” Kalamchi said. “I think it’s a waste of time.”

A Crimson poll of 363 undergraduates in December found that students are split on the issue, with 45 percent favoring the pre-break exam schedule and 40 percent saying that exams should not be moved.

Gross, who teaches Quantitative Reasoning 28, “Magic of Numbers,” said he himself was often frustrated by the month-long gap between the last lecture and the final exam.

Gross is expected to appoint a deputy dean this semester to assist in administrative affairs of the College, a move which he says will free up his plate for more direct interaction with students and faculty members.

“I need to hear what the students think of the curriculum, because they’re the ones that have to take the courses,” Gross said in an interview yesterday. “If I’m sitting in this office, I can’t do that.”

After the meeting, Crouse said that while she felt the sampling of students was not representative of the student body, the concerns voiced were diverse and “symbolic” of the concerns of many undergraduates.

“I think the J term is going to be a huge issue, and the core curriculum,” Crouse said.

“Faculty and administrators will push agendas that make sense from their perspective, but the curricular review and meetings like these are an important, not merely symbolic step in ensuring that students are able to advance their agendas as well,” Mahan said.