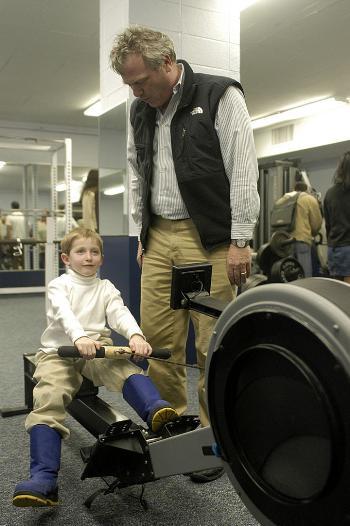 With their House gym now in good shape, Quincy residents are ready to pump up.

After a month-long renovation largely financed by a $20,000 grant from the College, Quincy House reopened its gym yesterday, setting the course for the proposed renovation of all House gyms.

To compensate for the delayed reconstruction of the Malkin Athletic Center (MAC), the College decided last November to grant the Houses $20,000 each to upgrade their gyms.

University Hall officials are still considering a variety of plans to ease the space crunch in the MAC and have not committed to if or when the project will begin.

Quincy will receive an additional $1,300 from the Undergraduate Council to defray the cost of the facelift.

Quincy House Co-Master Jayne Loader said that she pledged to match council funding with House money in order to supply the medicine balls, workout mats, and smaller weights that she said Quincy residents have requested. She has lent her personal weight set to the Quincy gym until new equipment arrives.

“Our theory is the better the gym looks, the more people will take care of it,” said Quincy House Co-Master Robert P. Kirshner.

Kirshner, who teaches the popular Science A-35, “Matter in the Universe,” encouraged Quincy House residents to attend yesterday afternoon’s ribbon-cutting ceremony lest they succumb to what he calls “Newton’s Law of Inertia.”

“An inert body without a gym becomes spherical,” Kirshner wrote in an e-mail Tuesday night.

After cutting the ribbon, Kirshner immediately climbed onto one of the new elliptical machines.

“We move from a state of flabbiness to a state of being pumped up,” he told students.

Discussions about renovating the Quincy gym began about a year ago, when the House’s lone treadmill malfunctioned. When Caroline A. Gross ’05 brought the problem to the Masters’ attention, they were eager to help because they were fitness buffs and wanted to promote student fitness, Gross said.

“At first we were just talking about one treadmill. We couldn’t afford it,” Karamchandani said. “We were promised a little money from the UC, but it still wasn’t enough to buy a whole machine.”

But the committee soon decided that the Quincy gym needed more than just a new treadmill. Gross said that the gym was cluttered with extraneous furniture and dilapidated machines, and added that the stained carpet and walls needed to be replaced. Once the committee determined that it would use limited House and council funding to update the gym, Gross solicited student opinion about the specific equipment that would be added to the gym.

During the summer, Kirshner discovered that Quincy was not the only house with a gym in need of improvements and began talking to other House Masters about the possibility of renovations.

Once the College decided to fund all House gyms, Quincy was able to realize its plans. Quincy has led the way with gym refurbishment—all of the other Houses have not yet used up their grants.

“We spoke with representatives from New England Fitness, the company which supplies the machines to the MAC, the day before the University grant was announced,” said Watts. “That’s why we were able to finish before anyone else.”

Gross speculated that another reason Quincy completed its gym renovation before the other Houses is that other Houses were waiting to order equipment simultaneously.

University President Lawrence H. Summers encouraged all Masters to order equipment together at the end of the spring term in order to take advantage of lower shipping costs, Gross said. But since Quincy, she said, had already been discussing renovating its gym for months, the Masters did not want to wait another six months to revamp the Quincy gym.

Kirshner said that the renovation took place this January in order to minimize inconvenience to students.

“I had hoped we would have the gym ready during reading period,” said Kirshner. “But at least we have a great facility now.”

Yesterday, a few dozen Quincy residents meandered down to the basement to investigate the gym’s new offerings.

“No one wants to trudge to the MAC, especially with the cold weather,” said Brendan F. Buckley ’04. “[The MAC] really is a madhouse. It’s difficult to get a treadmill or bike, and God help you to find an elliptical.”

Quincy Tutor David M. Thompson marveled at the relative silence of the new treadmill as he ran.

“The old treadmill made a sound that was a combination of a screech and a large freight train. This one is quiet. I don’t need earplugs,” he said.

Gross said that she hoped Quincy would be able to raise enough money to buy a second new treadmill, a desire of the majority of students to whom she has spoken.

“Now that the gym is so nice, I can see it getting really crowded and there being a wait for the treadmill,” Gross said.

Quincy House residents will enjoy the renovated facility free of charge and can access the room via key card. “This fitness center can do stuff that you would have never thought possible, or even desirable,” Kirshner said. “You’ll have muscles upon muscles!”