For Janitor, Politics Is a Way of Living 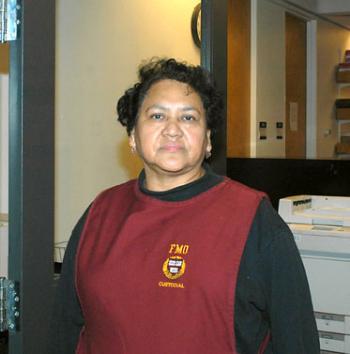 Harvard Janitor Victoria Iscayau has thrown her support behind the Democratic Party, even though she is not a U.S. citizen.
By May Habib, Crimson Staff Writer

Victoria Iscayau jots down her schedule in a worn, yellow book decorated with the American flag and the words “God Bless America.”

She pencils in day shifts as a baby-sitter and nights as a Harvard Law School janitor. Workers’ rallies and presidential canvassing all go into the same book. She’s written down these and more and soon she’ll write in a new one: citizenship classes.

“I’m going to keep working while God gives me energy,” says Iscayau, an immigrant grandmother who came here from Guatemala more than 20 years ago.

“If I could learn English, I’d run for office,” she says, with the help of a translator.

Iscayau is a political junkie. She went door-to-door campaigning for former Vermont Gov. Howard B. Dean. She has spoken at “so many” workers’ rallies that she cannot even produce a number. As a non-citizen, Iscayau is not eligible to vote in U.S. elections, but that has not prevented the leadership of the Service Employees International Union (SEIU) from taking notice of her political acumen.

She was chosen as one of five members to sit on Local 615’s Political Action Committee in 2000 and remains one of its most active members.

The 13,000-member Local 615 represents all of Harvard’s custodians.

“She has a sincere interest in helping to get the immigrant worker community organized in Boston,” says SEIU organizer Aaron Bartley, who has known Iscayau since she came to work at Harvard three years ago.

“It’s a very new community in many ways in the sense that since 1990, tens of thousands of Central American workers have arrived in Boston and are quickly becoming a formative political force,” Bartley says.

The political action committee is currently working to pass a bill through the State House that will allow immigrant workers to obtain driver’s licenses, according to Bartley, but it also takes part in national politics.

“The union picked me because I talk a lot,” Iscayau says with a laugh.

At the endorsement conference, Iscayau and representatives from locals across the country heard from eight of the Democratic candidates before voting for the candidate they thought the SEIU should endorse.

Iscayau has pictures of herself with all of the Democratic contenders who spoke at the convention, including Dean, which she has sent to relatives in Guatemala. The SEIU has no problem with non-citizens’ potentially choosing the next U.S. president, Bartley says.

“SEIU is committed to extending and broadening the rights of all immigrant workers in the United States,” he says. “Providing a space for debate and empowerment with respect to the presidential race is one example of that commitment.”

The union also asked Iscayau to campaign for Dean in New Jersey, so she spent three days last October canvassing neighborhoods with Spanish speakers. She proudly declares that she convinced three families to switch their registration from Republican to Democrat.

Now that Dean has dropped out of the race, Iscayau has become a Senator John F. Kerry supporter, reasoning that supporting anyone but the front-runner will only “split the Democrats and help the Republicans.”

According to Bartley, the SEIU will probably endorse Kerry.

“[The SEIU is] stepping back, taking a breather,” he said. “I’d say within another month there will be a new endorsement, but of course members can vote for whoever they want to.”

Though as a U.S. resident she was unable to vote in Massachusetts’ primary last week, her only son and his wife voted for Kerry, who won Massachusetts. She says her son, also a custodian at Harvard, is not interested in politics but she pushes him to the polls anyway.

Iscayau says that this may be the year that she finally signs up for U.S. citizenship classes, a requirement to eventually obtaining citizenship. It bothers her “a little” that she can’t vote, she says.

THE URGENCY OF NOW

This election is especially important, Iscayau says, because the economic situation has become “desperate” for workers under the Bush administration.

“The economy is pretty bad and people are being fired from the top to the bottom,” she said. “Right now, the rents are so high two families have to share one apartment.”

Iscayau lives with her son, his wife and their two children in an apartment in Allston.

Iscayau recalls a large workers’ rally held in Boston a couple of years ago where Kerry spoke of workers’ rights.

“Even before he was a candidate, he was supporting the people,” she says.

“He is not anti-union like [U.S. President George W.] Bush.”

“You’ll see a lot of us [workers] in the streets if a Republican wins again,” she says. “We have to get a Democrat in the Casa Blanca.”

“Bush says he stands with Hispanics because he threw a Cinco de Mayo party at the White House,” she said. “But he invited only very rich Hispanics. He doesn’t care about the poor workers.”

Iscayau also thinks that Bush’s temporary amnesty proposal for illegal aliens, announced in January by the White House and immediately denounced by critics as an election year ploy to woo Hispanic voters, is a “bad plan.”

“It gives [illegal workers] amnesty for just two years and they’re under the power of their boss. They can get kicked out after two years.”

Iscayau credits Kerry with attempting to out forth an alternate amnesty

proposal that does not restrict the period of legalization.

Kerry’s campaign website says that the senator supports an “earned legalization” proposal that will allow undocumented workers to legalize their status if they have been in the United States for a certain amount of time, have been working, and can pass a background check.

“He’s right now working on getting amnesty for people who don’t have documents,” she said.

Iscayau hopes to volunteer with the Kerry campaign soon.

She also has her fingers crossed for the SEIU’s “2,004 in 2004” program, which will sponsor 2,004 union members to take a few months off and volunteer with the presidential campaign of their choice.

Iscayau, who records her time commitments in a pocketbook decorated with an American flag and the words, “God Bless America,” has no intention of letting up her hectic schedule.