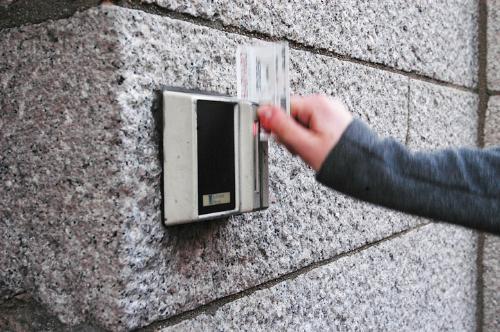 But as has been the case in past years, the proposed goal of opening all doors to all undergraduates at all times has met with mixed reactions from the administration and House Masters. While some argue that accessible dorms will provide sanctuary for students in distress, others argue that it will compromise house security.

“Based on the recent wave of sexual assaults, it’s really unsafe to restrict students from swiping into other dorms,” he says.

According to Pforzheimer House Masters James and Suzanne McCarthy, students relied on metal keys as recently as a decade ago.

“Pforzheimer House was the first House to grant card access to non-residents during daytime hours,” they write in an e-mail. “Within a few years after our change in access policy, all Houses offered this to residents from other Houses, and the morning opening and night closing times were made more or less uniform.”

At the heart of the debate lie concerns about student safety. While the Masters fear a potential increase in crime and vandalism, proponents of 24-hour UKA instead concentrate on providing undergraduates with a safe area, no matter the hour.

Palfrey cites recent thefts in Leverett towers, and the arrest of an unauthorized person on several charges including intent to commit a felony, to substantiate his opposition.

“The event at Leverett House last week, and the fact that strangers are occasionally found wandering the Adams House tunnels and sleeping in Claverly, do worry me,” he writes in an e-mail. He added that he would support 24-hour UKA if Harvard police determined it were the safest option.

The McCarthys say that they have weighed the “architectural aspects of Pforzheimer House” in devising their current policy. Because all parts of the House are immediately accessible once a student manages to enter any of the main buildings and because “at times students are harassed or stalked by other Harvard students,” they have tried to accommodate the accessibility and safety concerns of residents and non-residents.

“Keycard access among the Houses has brought great convenience and enhanced safety to all students,” they say. “However there is a point at which additional convenience, perhaps for many, comes at the expense of safety, perhaps for a few, and in the final analysis, safety always trumps.”

“It seems to me the main consideration is the safety issue and that seems to be a significant advantage of 24-hour access,” he says.

He adds, however, that he will have to consider arguments on both sides, and ultimately students’ sense of security will take priority.

“I’d want to know what the students in the houses think about this, it’s their sense of safety,” he says.

Princeton University Police chief Steven J. Healy, who has dealt with security issues on a variety of college campuses with universal access, says the Harvard community should not expect a drastic change in its safety as a direct result of implenting full-time UKA.

“It’s very difficult to find a direct connection between the current access system and the level of community safety,” he says. Instead, safety depends on factors such as setting, crime trends, and environmental factors.

Glazer, who chairs the Undergraduate Council’s Student Affairs Committee, says that an average of 14 non-Quincy students enter the house in the hours between 2:30 and 7:30 a.m. every three weeks, with no sign of any increase in crime or vandalism.

“You could imagine some, but there is no evidence to support higher theft,” he writes in an e-mail. “Most cases of theft in all the Houses involve students letting unauthorized people into the House or failing to take the elementary precaution of keeping the suite door locked.”

SAFETY IN THE YARD

According to Dean of Freshmen Elizabeth Studley Nathans, the same problem of unlocked doors is responsible for many crimes in the Yard, and is exacerbated by the setup and the “unobstructed access” of first-year dorms.

“Someone entering any Wigg entry, for example, could quickly descend to the basement and by moving through the basement gain immediate access to a whole series of entries occupied by nearly 200 students,” she writes in an e-mail.

In light of this, Nathans says the Freshman Dean’s Office (FDO) is unwilling to adopt 24-hour UKA, which she described as a proposal that “seems more likely to compromise the safety of more than 1600 students, than to enhance it.”

Glazer points to two sexual assaults in the Yard as an indication of the necessity of opening first-year dorms to all undergraduates. “[The council] agrees that the FDO should move on this,” he says. “It’s not acceptable and it’s irresponsible to talk about safety and not consider safety for all students.”

Nathans says that as frightening as the attacks in the Yard were, nothing in the police report of one of the gropings suggested that the incident “would have been prevented or its impact lessened by UKA.”

In addition to issues of safety, Nathans and Assistant Dean of Freshmen James N. Mancall expressed concern that providing access to Yard dorms could lead to upperclass undergraduates taking over first-year space.

“Students...would rightly assume that the FDO can’t and won’t stand guard over the common spaces 24/7 to keep unauthorized folks out,” Nathans says.

PIGGIES ON HARVARD’S BACK

A different type of unauthorized individuals—non-Harvard affiliates—can enter the building through “piggybacking,” which refers to persons entering a building in the wake of someone who has swiped in. While the administration and the Masters have expressed concern that 24-hour UKA will increase this practice, Glazer argues that the current system encourages piggybacking because students swipe in non-residents, assuming they live in another House and simply do not have access.

But Nathans maintains that if current situations are any indication, 24-hour UKA would only worsen the problem in first-year dorms.

“In fact, simply watching students readily piggyback folks in—even folks they don’t know...suggests that piggybacking will if anything become more widespread when it is assumed that everyone who ‘looks like a student’ has legitimate access to the Yard and Union dorms,” she writes in an e-mail.

Associate Dean of the College Thomas A. Dingman ’67 acknowledges that there are legitimate arguments on both sides, but points to Yale’s experience with UKA as evidence supporting Nathans’ stance. The university was promised 24-hour UKA would cut down on piggybacking—but the practice did not decrease.

“In fact they have reported to us that students can still be sloppy about it,” he says. But Dingman adds that he doesn’t think this should be enough to eliminate the possibility of instating 24-hour UKA.

And Council president Matt W. Mahan ’05 says that, with or without full-time UKA, piggybacking is inevitable.

“To some degree, people will piggyback other people in...That’s kind of a moot point,” he says. “It’s human nature.”

Dingman says the student discussion of the issue is positive, and he is “heartened” by Quincy House’s experiment with 24-hour UKA.

“I guess that I’ve always felt that the fact that freshmen can get in one another’s dorms without trouble makes me not so wary about opening this up further,” Dingman says. “On the other hand, I greatly respect the Masters’ opinions and I’d be very interested in hearing what they have to say.

“I’m hopeful that people will keep discussing this with an open mind,” Dingman continues. “Ultimately it will be the Dean of the College’s decision.”