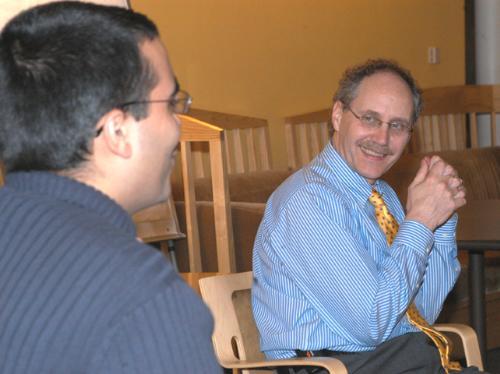 The Student Mental Health Task Force listened to students’ concerns on issues ranging from the competence of house tutors to the partial integration of campus mental health services in an open forum last night in Ticknor Lounge.

Dr. Paul J. Barreira, a psychiatrist at McLean Hospital and the chair of the task force, solicited student recommendations on ways to improve mental health at Harvard. Barreira said he intended for yesterday’s two-hour meeting to be a platform where students could speak out rather than a question and answer session.

Last night was the second meeting with students that the task force has hosted, and the members have been responding to student input through e-mail and a newly created mental health website.

“I think that both meetings with the students have been successful,” Barreira said. “It is not only peoples’ personal experiences but the ideas that they come up with that are very useful.”

Barreira and other task force members asked to keep the second half of the meeting off of the record to allow students to share personal experiences in a non-threatening setting.

The intimate meeting, which included several task force members and about a dozen students, focused on the need for more consistency in house support systems.

“Depending on the house where people are living, there are different strengths among the junior and senior tutors and Masters and interest in the students’ emotional well being,” Barreira said. “I think there is an interest in trying to standardize that so that it isn’t so random.”

Former Undergraduate Council President Rohit Chopra ’04, one of four student members on the task force and the only one in attendance, said that updating the House tutor system was one of the primary goals of the task force.

“The Houses were supposed to be intellectual communities. Now there are a lot of challenges that students face that are not related to intellectual life,” Chopra said.

The participants also discussed problems associated with the difficult transition to Harvard during students’ first year.

“I can see how Harvard was almost a saner place when it was a rich old boys’ club because at least everyone was not the best,” Chopra said. “You are not going to be the best at everything here, and it is really tough for people to deal with that.”

Task force members responded to questions about the potential pooling of the mental health resources at the Bureau of Study Counsel and University Health Services. Though Barreira would not comment on specific details of the proposal to integrate the University’s two primary mental health services, he did say that a closer relationship between the two would be beneficial for students.

“Both the mission and vision of the task force, Dean [of the College Benedict H.] Gross [’71] and Provost Steven E. Hyman is to try to get all of the services that are available to students working together collegially to make sure that you get what you need at the right time,” Barreira said.

Although task force members agreed that there is still much work to be done in improving mental healthcare on campus, Barreira noted that they are already accomplishing many of their goals.

“Some of these things are within grasp,” he said. “We can do it, and that’s an encouraging thing.”