After 25 Years, Little Russia To Close Its Doors 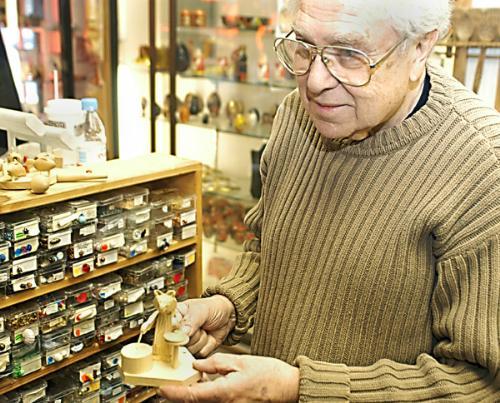 Nathan Schiller the owner of Little Russia, displays a toy cat that he assembled himself. The wooden figure is among the remaining items for sale at the Harvard Square store, which will soon close for good.
By Jessica R. Rubin-wills, Crimson Staff Writer

Harvard students streamed into Little Russia one day about 15 years ago, not to buy nesting dolls or painted eggs, but to check off an item on their scavenger hunt—one Nathan Schiller, screenwriter, Soviet emigre and owner of the Harvard Square folk art store.

“I had Harvard students in all day, a couple, several every hour,” says Vera Gross, Schiller’s daughter, who was behind the counter as students entered in search of the owner’s name. “I just started handing them the business card.”

But soon the 80-year-old Schiller will be even harder to find for would-be scavenger hunters as he closes up Little Russia after about a quarter-century in the Square.

The store’s lease has expired, and Little Russia will remain in its space at 99 Mt. Auburn St. only until the landlord finds a new tenant.

Schiller says that he just couldn’t make a long-term commitment to keeping the store open.

“[The landlord] asked me to sign the lease for five years. Because I am now 80 years old, that’s not possible to sign too long,” he says. “So we have to close the store.”

Last week, long-time customers and new visitors browsed in the small shop, tucked in the second floor of the mini-mall next to Tower Records, where the remaining Matryoshka dolls, beaded jewelry and decorated boxes are all 75 percent off.

“We come to Harvard Square and say, ‘Oh, let’s go look at Little Russia,’” says Ingrid Furlong, a Boston resident who has been crossing the river for years to shop at Little Russia.

She stood gazing at the jewelry alongside her friend Joan Witt of Newton, who described herself as “mad for amber.”

Customers describe the store as a holdover from the days before an influx of corporate chains diluted the charm of the Square.

“I’m always sad when another store in Harvard Square that’s not a chain bites the dust,” says Lily L. Brown ’04, who made her first visit to the store after hearing from a friend that everything was deeply discounted.

Schiller’s Harvard Square customers say they will miss the longtime store owner, and he has fond memories of his customers—including the Harvard students who used to drop in to practice Russian with him.

“Sometimes better, sometimes worse,” he says of the students’ Russian skills. “But we understand each other.”

Schiller has owned stores in Boston and Brookline, but Gross says her father always felt the customers in Cambridge were special—not necessarily wealthier than the clientele at his Newbury Street store, but more appreciative of art.

“It was a crowd closer to his heart,” she says.

When Schiller came to the United States in 1973, his background writing films about fine arts and his wife Victoria’s experience as a high school German teacher were of little use.

“I think they don’t need scriptwriter who doesn’t speak English,” he says with a chuckle.

With Gross supplementing her father’s English, Schiller sits in his Newtonville home and describes the evolution of the business from a one-room operation in downtown Boston to a successful local chain of stores.

With $1,750 from the Jewish Family and Children’s Services, Schiller started the first Little Russia store in 1974 on the fifth floor of a jewelry building on Washington Street, where he shared a room with his brother’s clock-making business.

He became a well-known figure in the local Soviet community thanks to his role in helping newly-arrived families get established in America.

According to Schiller, the Soviet government only allowed emigrants to take the equivalent of $500 with them when they left the country. So the families would use their savings to purchase crafts for Schiller, who sold them in his store and held onto the money to give to the families when they arrived.

“The year before going to emigration, they begin to mail me parcels,” he says. “When they come here they have in the bank some cash. Sometimes good cash.”

Because he was afraid of Soviet government monitoring, Schiller didn’t explicitly request items. Instead, he says, he dropped hints about what he might want for his store.

“I write…‘I like matryoshka dolls. I like some shirts, embroidered shirts. And some shawls.’ And they understand what to bring,” he says.

Little Russia came to Harvard Square in the mid-1970s, when Schiller rented a storefront in the Garage so small that he had to put his items on a pushcart and roll it into the hall to sell. In 1978 the store jumped to its current building on Mt. Auburn Street.

As the business became more successful, Schiller opened a store in Brookline in the mid-1980s, later closing that branch to open another store on Newbury Street, in downtown Boston.

“During the life of the store it’s changed three or four or five times,” Schiller says.

The store expanded to sell semiprecious jewelry, and Schiller began selling jewelry that his friends made, using his wife’s designs. He later sold beads and offered classes in the Brookline store to teach customers how to make their own necklaces, and added a new line of jewelry from Africa, Asia, Greece and other far-flung locales.

In November 1992 a fire destroyed the Mt. Auburn Street building and all the merchandise in it, eventually prompting Schiller to close the second store in Boston and move all the inventory to his rebuilt Cambridge store.

“We bring all the merchandise from Newbury Street to Harvard Square and continue the business,” he says.

Before starting his career as a business owner in the United States, Schiller, who earned a degree in fine arts from Moscow University, wrote scripts for educational programs that aired in the Soviet Union.

In one film, he compared photographs and paintings depicting Tolstoy to show the differences between the two mediums.

“One of the differences between America and Russia is that in Russia there’s actually a market for these movies,” Gross jokes of her father’s work.

While making a film on Michelangelo’s unfinished sculptures, Schiller says he felt the repressive weight of Soviet restrictions. He had to write the script without seeing the artist’s work in person, since the Soviet government would not allow citizens to leave the country.

“My dream was to be in Italy and see what I write [about],” he recalls.

When the Soviet government began to permit emigration in the 1970s, Schiller and his family decided to come to the United States. The real reason, he emphasizes, was to provide a better education for his children, who were five and 17 at the time—but the chance to see Italy didn’t hurt.

Many emigrants were routed through Italy, and Schiller and his family were in less of a hurry than most to continue on to America.

“All the emigrants rushed to be in USA,” he says. “And I came and asked, ‘Leave me one month more.’”

After passing several months in Italy, the family arrived in the United States, where Schiller opened the family business and his wife Victoria taught Russian at Harvard.

“She had a big success. The students like her very much,” Schiller says, proudly noting the positive evaluations she received.

Schiller had no previous business experience, since the only private businesses in the Soviet Union at the time were black market, but he says he was ready to try something new.

“Until 50 years I write the scripts. And after 50 you have to do something else,” he says.

As Little Russia prepares to close its doors, Gross says she is feeling nostalgic about losing a part of her childhood.

“Half my memories are associated with being in the store,” she says.

The store has always been staffed entirely by Schiller’s relatives and friends. Gross says she helped out regularly on weekends and during the summer. Friends of the family who needed work often found jobs at Little Russia.

But now that Schiller and his wife are ready to retire, Gross, a biologist doing post-doctoral work at Boston University, and her older brother Alexander Schiller, a lawyer, both decided not to continue the business.

“Eventually it gets to the point where you have to take it over and make it a second generation family business or go your own way,” Gross says. “My brother and I made other choices.”

Little Russia’s current spot could have a new tenant within a few months, according to Alan Shapiro, the owner of Gnomon Copy who manages the building.

Shapiro says he expects a similar type of business will replace Little Russia.

But Otto Coontz, a resident tutor in Adams House and long-time patron of the store, doubts that the store’s successor could fill the off-beat niche.

“I’m sure that whatever it is, it would probably be something that we’d find at a mall,” said Coontz. “This is just a unique place.”

Schiller seems moved by the customers who are sorry to see the store leave.

“They tell me that Harvard Square lost something,” he says, and then adds with a smile, “only after closing I understand how much they love me.”