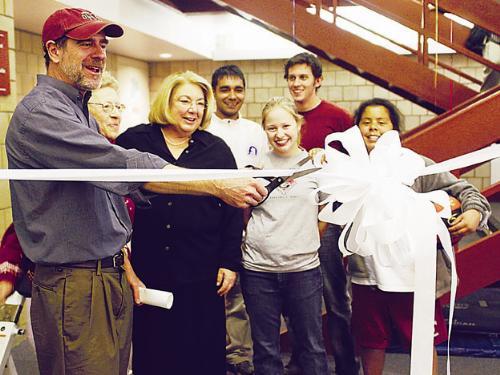 Dean of the College Benedict H. Gross ’71 cut a large white ribbon at the Quad Recreational Athletic Center (QRAC) last night, marking the opening of an improved exercise area that may put Quad residents on equal footing with their river neighbors.

The improvements include 18 new weight machines, 12 new cardiovascular machines, a room-length mirror and vastly improved lighting—renovations that cost about $75,000 in total.

Student reaction to the changes has been overwhelmingly positive.

“Usage is way up,” said Zak M. Gingo of Harvard’s Office of Physical Resources and Planning.

In fact, usage has doubled since the renovations, according to Gross.

“It shows how a gym can be a place of community bonding,” Whitmire said.

Begun at the end of January, the renovations were completed last Friday.

This upgrade was the QRAC’s first since second-hand Nautilus equipment was installed in the 1970s, according to Jeremy L. Gibson, who also works for Office of Physical Resources and Planning and was on hand for yesterday’s opening.

But the aging facilities looked even older to Gross.

“I thought it looked like a medieval torture chamber,” he said of the pre-Reformation gym.

Gross said he initiated the project after reading last year’s senior surveys and noting consistent complaints about the dearth of recreational space on campus.

Gross said that by monitoring use of the new equipment, Quad Houses will be able to see which machines students would most appreciate in House gyms.

Associate Dean of the College Thomas A. Dingman ’67 said the changes provide a sneak-peek of what the Malkin Athletic Center (MAC) will look like after it finishes a similar round of improvements.

“This is the first step in a multi-step process,” Gibson said.

Dean of the Faculty William C. Kirby announced in his annual letter last month that some renovations to the MAC would begin this summer. These renovations, while falling short of the $30 million necessary to completely redo the MAC, are likely to add additional cardiovascular and weight-training equipment similar to those in the new QRAC.

Gross said he would be happy if the new gym equipment attracted river residents to the Quad.

“If we get people from the river that’s great,” Gross said.

The QRAC project is meant to supplement the upcoming House gym renovations in the Quad, Gross said.

“The house gyms couldn’t fit all this equipment in them” Gross said.

Earlier this year, Harvard allocated $20,000 to each House for gym renovations.

The $75,000 for the QRAC renovations came out of Gross’ discretionary funds, although he said he consulted the Athletic Department on the choice of specific machines and equipment.

Whitmire said she thought the QRAC facilities were now equivalent to what River residents enjoy.

“I’m happy to see you put the endowment where your mouth is,” Whitmire told Gross during the ceremony.

—Staff writer Joshua P. Rogers can be reached at jprogers@fas.harvard.edu.