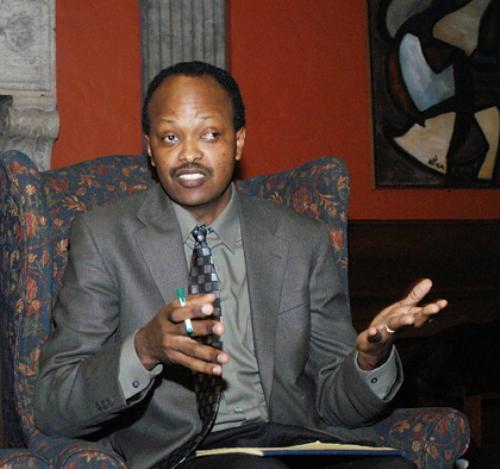 John Mugane, head of the department of African and African-American studies, speaks at a panel to kick off African Week.
By Michael A. Mohammed, Crimson Staff Writer

The atmosphere was relaxed and fun—perhaps more than one would expect for an art form born in the mines of colonial South Africa.

The Harvard African Students Association (HASA) kicked off their first annual “Africa Week” with a panel discussion in Adams House followed by the Gumboots workshop, taught by members of the troupe. The next four days will offer events ranging from a film screening to a class on African drum construction.

The week’s activities will raise awareness of and expose students to a greater range of African culture than they may be accustomed to, says Simi Dosekun ’05, HASA’s social chair and the primary organizer of Africa Week.

The Adams Art Space will be holding “Umoja,” a show of African art, until Saturday. Other events include a West African Dance Workshop in the Eliot Dance Studio, a film screening, and a show of African fashion.

Dosekun admitted that the schedule may have some conspicuous omissions—none of the events deal with AIDS or the other myriad problems plaguing the continent.

“We deliberately left [AIDS] off the schedule because we felt that it’s the thing that people most associate with Africa,” Dosekun said. “We wanted to show a different perspective.”

Panelist Suzanne Blier, Professor of Fine Arts and African-American Studies, said that American news readers who tend to think of Africa only as a site of tragedy should expose themselves to the continent’s strength—its culture.

“The popular press on Africa tends to be egregiously bad, focusing on horrible things,” she says. “At the same time Africa is in the middle of a [cultural] golden age. There are amazing artists really reshaping African culture.”

Blier, one of the panelists, discussed her experiences as a historian of African art and her struggle to get African works into the Fogg Museum—which she said she’d thought was a losing battle until the museum’s recent decision to exhibit African works.

“African art is in the Louvre and the Metropolitan Museum of Art, and Harvard, bless its soul, can sometimes take a little longer to catch on to change,” Blier says.

Lecturer in History Christopher Lee, who teaches History 1903, “History of Modern Africa, 1852-1994,” is optimistic about Harvard’s new willingness to embrace Africa, embodied in the University’s addition of African Studies to the Department of African-American Studies and the granting to the Committee of African Studies the right to appoint faculty.

“It’s undergoing a transformation,” Lee says. “African studies is definitely on the upswing.”

But John Mugane, appointed by the Commitee as senior preceptor in African Languages, says that though Harvard is improving, broader trends remain troubling. Despite Harvard’s addition of new tutorials in six African languages, he said, a double standard persists in Western scholarship between those who study Europe and those who study Africa.

“It is inconceivable to be an expert in French history when you don’t speak French,” he said, “but there are so many people who show up as experts [in African studies] who do not even attempt to learn the language.”

And HASA’s leaders said that there is still a shortage of Africa-related course offerings.

HASA president Onyi Offor ’05 described the dearth of courses as a crucial issue for students interested in Africa and as an item high on the HASA agenda.

“People need to get involved in a struggle—and I will call it a struggle—of getting greater representation on campus,” Offor says.

Africa Week organizer Dosekun, an international student from Nigeria, says that offerings in the Core are weak, and there isn’t a single foreign cultures class on Africa.

“Africa is as foreign as it gets from the American perspective, but there’s nothing,” she says.

Dosekun says that all students should be encouraged to study Africa.

“If American students at places like Harvard don’t learn about Africa, things there are never going to change,” she says.

—Staff writer Michael A. Mohammed can be reached at mohammed@fas.harvard.edu.