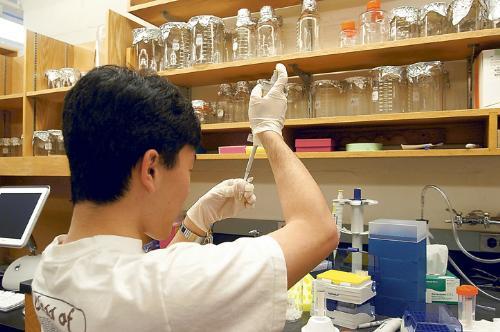 On the third floor of the Divinity Ave Biological Laboratories, undergraduates have a space to call their own.

Three small labs, which boast some of the field’s most impressive technology, are now the home of Molecular and Cellular Biology (MCB) 100, a new class that throws undergraduates into the trials and tribulations of laboratory research.

All of the space is reserved for undergraduates. Eighteen students file in on their own time, working about 10-12 hours a week on any one of the three projects. Some days students might spend no more than 15 minutes in the lab—to set up a reaction or take a quick analysis of the previous day’s results. Other days they are there for hours, puzzling through experimental research.

Each student keeps a meticulous log of their research in a small black binder, work which will eventually culminate in a professional-style—and possibly published—report of their semester.

MCB 100 tries to broaden biology and bio-chemistry concentrators’ conceptions of research beyond what they learned from introductory science labs.

“Ideally, every week we go through the nitty-gritty of what it’s like to be in a lab. The results that they are acquiring right now are as though they were graduate students or post-doctoral fellows, and there is the potential that these research results could end up in a publication,” says Angela Koehler, a fellow at the Broad Institute, who has six students assisting her in screening libraries of small molecules for transcription factors.

Three top researchers—Koehler, Head Tutor for Biochemical Sciences Richard Losick, and Associate Professor of MCB Craig Hunter—have offered their projects to the program this spring, allowing six students to assist each one.

Losick’s project involves experimental examinations of mutants in the production of biofilms, which are essentially communities of bacteria that reside throughout the human body. Hunter’s students work on examining aspects of the recently-discovered phenomenon of RNAi.

MCB 100 students work in-depth on one specific project, but convene in weekly group meetings to see what’s going on in the other groups—a practice which professors say the average student doesn’t experience until graduate student lab rotations.

In this way, Losick, Koehler and Hunter say that the students get a richer, tougher experience than in labs attached to introductory science classes.

“The lecture course labs are designed to illustrate specific points and methodologies, whereas this course is designed to provide the students with a direct experience of what research is really about,” says Hunter. “The frustrations, the failed experiments... it’s not the tidy simple conclusions. The process is not always a straight line.”

This process, of researching without having a predetermined answer nor a defined protocol for obtaining results, has previously been reserved for students willing to work in professors’ labs on their own time.

Often, these students are preparing to write honors theses.

But professors within the biology department, even before the discussion of the curricular review began, decided that students needed more opportunities to have this kind of research, either outside the experience of thesis-writing or in preparation for that experience.

“The idea of MCB 100 is to create a large research group equivalent in size to a senior faculty’s research group, staffed entirely by undergraduates,” says Executive Director of Undergraduate Education in MCB, Robert Lue. “It’s outfitted exactly like a senior researcher’s lab.”

Lila K. Gollogly ’04, a student in the course, adds that it feels “just like an internship,” not like a standard course.

“It’s not just pipetting all day long,” Viel says. “You think more about the method and the elegance of the method.”

While psychology and biological anthropology students have played in Professor of Psychology Marc Hauser’s Monkey labs for a number of years now, this is an unusual development in either biology or chemistry departments, according to Lue.

MCB 100 is acting as a pilot, hoping to train students in basic research techniques and to give them unusual access to high-tech labs. In addition, the students can receive the kind of mentoring that they wouldn’t get from working alone in a professor’s lab. One graduate student advises each project, and all the students report to both Viel and their respective professor .

This comes at no small cost. Losick and Lue have jointly funded the course with two grants from the Howard Hughes Medical Institute (HHMI), which cover the $300,000 worth of equipment in three laboratories. Aside from the standard rows of pipettes, beakers and microscopes, the facility houses a gene gun, an RTS ProteoMaster and high-tech imaging systems.

Moreover, Losick and Lue approached Dean of the Faculty of Arts and Sciences (FAS) William C. Kirby and Dean of the College Benedict H. Gross ’71 last year for further funding. Matching FAS grants will go towards a renovation of the 5th floor biological labs, to allow more space next year.

Lue and Viel plan to repeat the course in each semester, with new projects each term. Viel says that the renovated laboratory could hold about 30 students each semester as well.

Over 50 students applied for the 15 spots in the program this spring, causing the group to expand to 18 to accommodate graduating seniors.

Viel hopes that MCB 100 will build a bridge in the curriculum between taking introductory science labs and signing up for a professor’s original projects.

“The idea is that this is a lab that we want to be as similar as possible to a real research lab,” Losick says. “One of our hopes was that sophomores would use this a stepping-stone to joining a research lab,” he said, adding that this might eventually create a “sustained relationship” between a student and professor, possibly leading to a thesis. Losick says that he tries to take on undergraduates each year, but that space constraints have limited the number he can handle.

Hunter echoed Losick’s sentiments, saying that he could generally accommodate no more than two undergraduates a year up until this point.

Professors and students insist that there is no shortage of opportunity to do independent work in a researcher’s lab —Lue estimates that over 200 a year do so—but concedes there may be certain impediments to the average undergraduate.

“If you have really demanding extracurriculars, or if you ever want to spend time outside of the laboratory, it’s really hard to manage a lab job,” says Gollogly, who said that she didn’t have the time to research at Harvard between dancing in the Harvard Ballet Company and volunteering for Women in Science. She instead chose to work in a laboratory during the summer, and opted out of the thesis track.

Similarly, Losick acknowledges that some students might feel reluctant about applying for a lab job without previous experience, though he is careful to advertise that experience isn’t necessary. Regardless, Lue expects this will make students feel more comfortable with lab research.

Additionally, Lue says that it will “lower the activation energy” involved for faculty to take on undergraduates. Viel will handle the day-to-day training in the laboratory, and faculty members won’t be faced with the traditional space constraints.

Lue has also said that MCB 100 is part of a newer, broader life sciences division—in other words, it involves, and will continue to involve, interdisciplinary research.

“In terms of the overall vision of trying to bring together multiple faculties under the umbrella of a division... this is actually a very important step to how an experimental research course can actually bring faculty together in a collaborative way.”