Trump trumps himself in shameless self-promotion 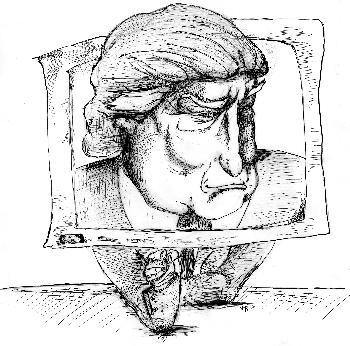 By Brian A. Finn

Tonight, tens of millions of Americans will tune in to the season finale of the reality TV show, “The Apprentice.” The show, which has been ratings gold for NBC, features several contestants vying for “the dream job of a lifetime” working under the tutelage of Donald Trump himself. Each episode features a business contest of sorts between two teams in which the winning team gets a taste of Trump’s luxurious lifestyle, while members of the losing team duke it out in a boardroom, trying to avoid the catchphrase, “You’re Fired.”

This hourly celebration of capitalism has struck a certain chord with the American public. Perhaps the collapse of the tech bubble has heightened the mystery and allure of the Gatsby-esque world of the ultra rich. Maybe the recent spate of corporate scandals has made the inner-workings of the boardroom appear more exciting. Regardless of the reasons, the fact remains that “The Apprentice” has been an amazing self-promotional vehicle for the Trump.

Donald Trump—that relic of the greedy ’80s with the embarrassing comb-over and annoying smirk—has come back from his multi-billion dollar bankruptcy and is now ready to invade your newspapers and television sets. Poor old Donald has felt lonely this past decade as Americans have turned their attention away from him and towards the newly-minted billionaires of the high-tech industry. He did what any egomaniac starved for attention would do and created his own reality TV show that would feature him and only him in all his power and glory. Under the guise of looking for a good assistant, he would advance the myth of The Donald.

The American public has undoubtedly fallen for this myth. His books The Art of the Deal and How To Get Rich fly off the shelves. People watch the show religiously thinking that the mere flickering presence of Donald Trump in their living rooms will endow them with business acumen. Even the contestants on the show tremble at his awe-inspiring presence.

However, if The Donald is exceptional at anything, it is his ability to unscrupulously self-promote himself. The truth of the matter is that Trump is not a brilliant self-made individual but someone who was born into money. As the saying goes on how to become wealthy: “First I took a dime and worked hard to turn it into a quarter, then I took that quarter and worked hard to turn it into three quarters and then I inherited ten million dollars from my aunt.” The real trick to How to Get Rich using The Art of the Deal is to have a multimillionaire father who’ll let you take over a large real estate empire.

Not only has Mr. Trump done little to merit his wealth, or the reputation that goes along with it, but he’s done little good with the money that he does have. Wealth should, if anything, be a means towards greater refinement and culture and a higher sense of social and moral responsibility. Gold plated toilets and a jet with your name on it do not qualify as such.

If Trump did have some heartfelt sense of social justice, he would have extended the reach of this show beyond the petty confines of hard-nosed capitalism. Rather then seeing who can sell the most tricycles, he could have sent the apprentices to work on an enterprise zone in a poor neighborhood or have them solve housing problems for homeless families. Instead, the show has devolved into an entertaining mess of backstabbing and catfights between attractive women.

Tune in tonight and you can see the finale of this exercise in Trump’s ego. If you have better things to do with your time then watch Donald enter a boardroom in slow motion, then forgo tonight’s episode.

Brian A. Finn ’06, a Crimson business editor, is an economics concentrator in Lowell House.