Pinker: No Scientific Evidence for God 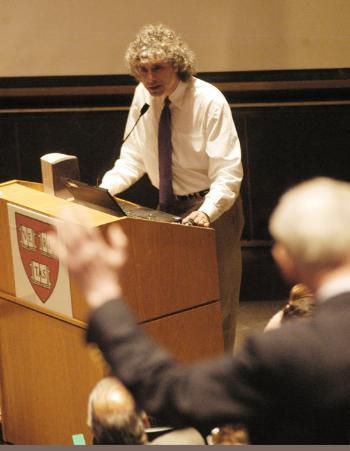 Johnstone Family Professor of Psychology Steven Pinker spoke to an overflow crowd of over 250 at the Science Center last night, arguing that human religious beliefs are a by-product of evolution, but not an actual evolutionary adaptation.

“The only way religious belief could be an adaptation is if a personal, intervening, miracle-producing, reward-giving, retributive god exists,” Pinker said, provoking laughs from the audience.

Pinker presented his evidence in his speech titled “The Evolutionary Psychology of Religion: Does the Brain Have a ‘God Module?’” The speech was hosted by the Harvard Secular Society as its first “flagship” event of the year.

Pinker began his argument by refuting what he called “three spurious adaptationist explanations of religion:” the suggestion that people embrace religion for its comfort, its sense of community and its ethical value.

Although he admitted that those three theories may be true, he questioned their merit in explaining the universal, widespread popularity of religion.

Pinker furthermore dismissed the idea of religion as a “source of higher ethical yearnings” and an unambiguous moral guide.

“The Bible is a manual for rape, genocide, and the destruction of families...Religion has given us stonings, witch burnings, crusades, Inquisitions, jihads, fatwas, suicide bombers...and mothers who drown their children in the river,” he said.

Pinker continued by identifying the difference between evolutionary adaptation and its by-products, and suggested that religion was of the latter category.

Religion, he said, “may be a by-product of certain features of our psychology that may [have been evolutionarily] adaptable.”

This includes the fact that religion can have practical benefits to both “producers” and “consumers” of religion.

Pinker concluded by suggesting that the battleground between religion and science in the 21st century would be psychology, just as it had been cosmology in the 17th century and biology in the 19th.

Sophia P. Snyder ’07, who said she attended the lecture because she knew Pinker to be an engaging lecturer from his Core class Science B-62, “The Human Mind,” found his scientific explanations of everyday behavior “typical.”

“He always talks in class about how ‘the mind is what the brain does’ and how the concept of the soul is being debunked by science,” she said.

Kerry J. Dingle ’05, president of the Harvard Secular Society, called this lecture, which was held in conjunction with the Harvard Humanist Chaplaincy, a “huge success.”

“Science can’t disprove religion—I look at philosophical arguments to do that. But it’s heartening as an atheist to see what people construe as the ‘spirit’ in purely naturalistic or scientific terms,” she said.

Brian S. Gillis ’07, however, had the opposite reaction.

Calling himself a “struggling Christian,” he said he attended this lecture purely on a whim and was excited to see that the topic of the speech would be the “God module.”

He said he was hoping to have the question “Is God a fabrication of my life?” answered.

But, if anything, Gillis said Pinker’s speech affirmed his faith.

“I’m not sure if Pinker’s ever been religious, but there were a lot of holes in his reasoning,” he said, specifically mentioning Pinker’s failure to address “books upon books of empirical evidence in support of particular religions.”

But Gillis signed up for the Secular Society’s e-mail list and expressed interest in further discussion with Pinker.

Others shared his sentiment.

“I’ve always been fascinated by what makes people believe so strongly in something that can’t be proven,” said Megan E. Camm ’07. “[Pinker] provided compelling refutations of some of the most salient issues.”