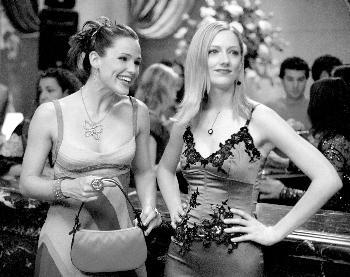 The painful yet delightful flashback scenes, wonderfully adept at tugging on adolescent girl anxieties, set the tone for 13 Going On 30, a Big story of suburban New Jersey girl Jenna Rink’s ascension into kitten-heeled city-girl life with the help of a boy, a wish, and a “seven minutes in heaven” game gone wrong.

Before the ink on Jenna’s geeky school photo has dried, the popular crowd struts down the hall in a cloud of hot pink and sparkles. Led by blonde side-ponytail styled Tom-Tom, constantly sporting bangle bracelets and acid wash denim, the self-titled “Six Chicks” have mastered both the complicated walk-while-chewing-gum combination and the snide remarks to Jenna and her road-less-traveled, slightly pudgy (read: loser) friend Matt. Jenna is, like, so not cool. Her only solace is to wish of a future circumscribed by her favorite magazine…a place and time when life is lived according to the motto “30, Flirty and Thriving.”

Before the soundtrack could loop “Jesse’s Girl” and “Burning Down the House,” Jenna’s wish comes true. Jenna Rink, now played by the fabulously lithe, Alias star Jennifer Garner, wakes up in possession of a Fifth Avenue apartment, a hunky hockey playing bed buddy who calls her “sweet bottom,” and a drawer full of B-cup bras that she can fill out without the help of a wad of quilted Charmin two-ply. This Jenna shops at Henri Bendel, drinks non-virgin Pina Coladas, organizes her files with Lisa Frank unicorn emblazoned folders, and knows the dance routine to Michael Jackson’s Thriller down to every last neck gyration. This Jenna was the prom queen and calls Tom Tom (now referred to as Lucy) her right-hand woman at Poise magazine, where she is, of course, the editor. This Jenna is also her adolescent worst nightmare—a cheating, backstabbing, lying bitch.

Yet, seeming to compensate for the severe character flaws that accompanied her wish, the 13 year-old in the traffic-stopping body is able to be at once quirkily fashionable, charmingly friendly and endearingly naïve. She covers her eyes during her boyfriend’s Vanilla Ice strip tease and scrunches her nose while blurting her signature catch phrase, “Oh, gross.” She cries about the near failure of her magazine to her parents and, more importantly to her old chum Matt (Mark Ruffalo), the friend who conveniently inhabits a Greenwich Village apartment around the block. Matt is no longer the loser boy-next-door, but a tanned, buff, hot-but-doesn’t-know-it-in-that-aw-shucks-way photographer. Insert Billy Joel’s ballad “Vienna Waits for You and Love” and we’ve got a young love reunited. Forget that Matt happens to be engaged to a Chicago weathergirl. All it takes for Jenna to win him over is an innocent ride on a swing set and a pack of Razzles, the popular 80s candy that turns to gum in your mouth.

Yes, Lucy does try to ruin Jenna’s career and chances with Matt, but Jenna prevails in all her genuinely young-at-heart, fluorescent glory in the end. Garner’s performance may lend itself to a Julia Roberts reference or two—both have the full-lipped, hearty laugh and smile perfectly complemented by a suitably charming on camera presence. Though the plot could have been written during a middle school sleepover, 13 is cute for cute’s sake—cuter than the recent teenage chick flick Win a Date With Tad Hamilton and a nice urban compliment to the farm-town setting of The Prince and Me. If nothing else, the pleasantly sappy coupling of Garner and Ruffalo is just enough to make the zits start to heal, the teeth straighten, the bra fill-out and the baby fat and other adolescent anxieties melt away or at least until the credits roll.