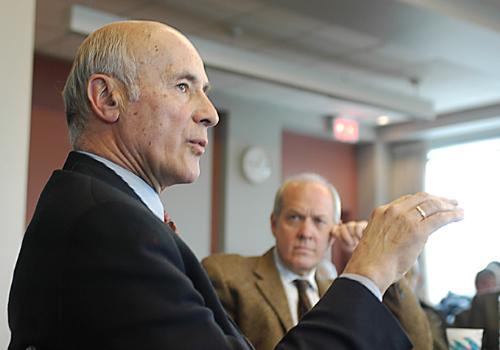 In his final days as dean of the Kennedy School of Government, Dean Joseph S. Nye told students and colleagues that the United States ought to garner international support by making its initiatives more attractive to its allies, not by force or coercion.

Nye, who will be succeeded by Black Professor of Political Economy David T. Ellwood ’75 this summer, spoke yesterday about the necessity of soft power, which he focused on in his 2004 book Soft Power: The Means to Success in World Politics.

Speaking in Bell Hall at the Kennedy School, Nye sat around the table and finished his lunch during the casual question and answer session after the talk.

Nye said that while he doesn’t support abandoning hard power mechanisms such as military strength, he warned that the often ignored forum of soft power represents a significant threat to American security.

“You can attract them and co-opt them to get them to want what you want,” he said.

“America has such an endowment of hard power that we forget we need to use our soft power,” Nye said. “The U.S. has a great deal of soft power, but we’ve been applying our policies in ways that make them appear arrogant and illegitimate.”

According to Nye, America’s unilateralism and apparent arrogance have lost it popularity among Western European nations as well as the Islamic world.

Nye said that the United States is losing even more popularity in the public opinion polls of “friendly” Arab countries, like Pakistan and Jordan.

Citing the Islamic world as a significant national security threat, Nye stressed the importance of soft power as a way to avoid antagonizing moderates to extremism.

“It’s true that soft power is not going to attract Osama bin Laden or al Qaeda. We need hard power to fight that,” he said. “Soft power prevents the loss of moderates to extremism. We need to give moderates an alternative vision. It’s not just whose army wins, it’s whose story wins.”

Nye also said that hard power policies were incapable of defeating the war on terror.

“In the case of Afghanistan, the use of American military force removed the Taliban government, it did not wrap up al Qaeda,” he said. “The only way you can deal with a transnational terrorist organization, like al Qaeda, is through close civilian cooperation.”

But Nye noted that the current condition is not irreparable.

International opinion about the United States was similarly low after the Vietnam War, he said. He added that America was able to change its image by adjusting its policies and its presentation of them, exemplified by the human rights policies of former presidents Jimmy Carter and Ronald Reagan, which were attractive internationally.

Shorenstein Fellow Rebecca MacKinnon ’91 said she strongly supported Nye’s arguments. She said she had developed similar opinions on international relations during her 10 years in Asia as a CNN journalist.

“Dean Nye definitely has a very important point that the U.S. could be leveraging more soft power,” she said.

MacKinnon also said she agreed with Nye’s desire to spread democracy without imposing it.

“When I was in China I would meet people who weren’t happy with their government, who wanted democracy and freedom,” she said. “But then you ask them about America and they have strong anti-American feelings. You’ll frequently meet people who admire American ideals but dislike American actions.”

MacKinnon added that anti-American sentiment is much more apparent abroad than at home.

“Americans really fundamentally do not understand that other people do not like Americans. They say its the government, not the people. Yet when I was in Pakistan after 9/11, their government was our ally but the people were anti-American,” she said.