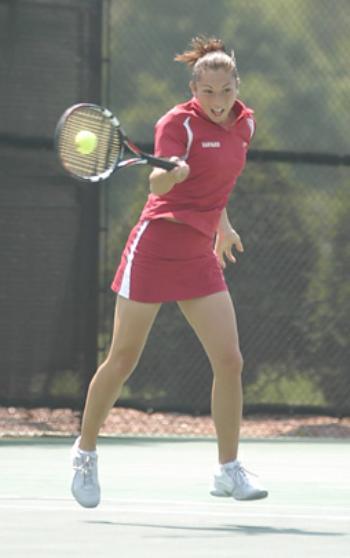 Junior Susanna Lingman teamed with classmate Courtney Bergman to win at No. 1 doubles, but the Crimson lost the doubles point and eventually its NCAA first round match to Ohio State, 4-2.
By Timothy J. Mcginn, Crimson Staff Writer

For 30 minutes, the No. 34 Harvard women’s tennis team pieced together the lineup that earned all the accolades, the No. 13 pre-season ranking and the promise of a return trip to the Sweet 16.

For 30 minutes, even though the Crimson trailed in two of three doubles matches, thoughts of a first-round exit from the NCAA tournament were the farthest from anyone’s mind.

For 30 minutes, Harvard’s fortunes defied those cruelly handed down since September.

And then, as has been the case ever since, injury struck down what chance of fulfilling that wealth of promise once existed, setting the stage for No. 39 Ohio State’s 4-2 upset of the Crimson (14-10, 7-0 Ivy) at Beren Tennis Center on Friday afternoon.

Down 5-3 in No. 2 doubles, sophomore Eva Wang and junior Alexis Martire were rallying, slowly erasing the lead they had surrendered with shaky play early thanks to aggressive poaching at the net and preternatural court coverage.

With co-captains Courtney Bergman and Susanna Lingman routing their opponents at No. 1 and freshman Preethi Mukundan and sophomore Melissa Anderson in trouble at No. 3, the fate of the doubles point rested squarely on Wang and Martire’s comeback effort.

Pounding opponents Lindsay Williams and Meaghan Colville with their groundstrokes, the tandem stood on the verge of swinging the momentum squarely in Harvard’s favor. Threatening to pull within a game, Wang raced to retrieve a ball sent back to the right corner along the baseline.

Though she ably retreated to return the ball, Wang aggravated a three-day old quadriceps injury and called a time out as soon as the point was recorded.

“I really though I could make it through,” Wang said, “but shots are completely unpredictable. I had to be sprinting for balls, and this one crucial point I completely went for one. I went all out for it and it hurt so much I was going to cry. They wanted to pull me out of doubles, but I wanted to play.”

Though she managed to play out the remainder of the match, her mobility was noticeably limited—an observation not lost on her opponents—and the comeback drive fell apart as the duo lost three of the next four games in an 8-4 defeat.

Anderson and Mukundan fell moments later by the same score, handing the Buckeyes (15-14, 8-6 Big 10) the first point of the match.

Though Ohio State thrives after jumping to an early lead, Crimson players dismissed that the point decided the match..

“I definitely think it was a match we should have won and could have won,” Bergman said. “But that’s just the way it goes some times.”

Of course, the minor setback on the scoreboard paled in comparison to the one incurred on the sidelines. After further treatment, Wang was declared a no-go, and Nos. 4 through 6 were shifted up a spot to fill her vacancy at No. 3 with freshman Cindy Chu inserted at the bottom.

“Mentally I felt everyone was okay but as far as taking someone out of the lineup so suddenly, that’s just a huge deal in itself,” Bergman said. “That was really rough for everyone behind Eva to have to come up like that. Cindy had to just come in. Everyone is supposed to be ready, but nonetheless.”

When Bergman stepped off the court, Chu led her third set 4-3, Martire was rallying in hers and Mukundan had just forced a final frame with a 6-3 second-set win.

Jackie Leskovar closed out Martire to knot the score at two apiece, transferring the pressure to the freshmen, at least one of whom would need to win for the Crimson to advance. After an uneven match of dotted by runs and swift momentum changes, Chu lost three staight games to Lindsay Bryan to close out the Buckeyes’ third point at 1-6, 6-0, 6-4.