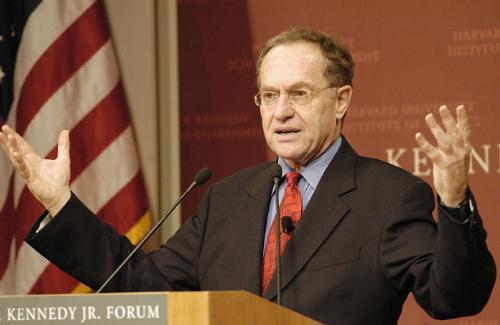 In a well-attended speech at the John F. Kennedy Jr. Forum last night, Alan Dershowitz criticized Israel’s global portrayal as a “colonialist, apartheid, genocidal” state, arguing that the reputation does not line up with the country’s actual policies.

The Frankfurter professor of law, Dershowitz is an outspoken and controversial advocate on behalf of Israel. Last night he reiterated arguments earlier articulated in his book, The Case for Israel.

In an attempt to rebut charges against Israel, Dershowitz catalogued historic grievances brought against Israel by her Arab neighbors. Dershowitz said that the accusation that Israel is a criminal state “frankly, makes up history.”

He said that Israel has made several attempts at peace, including a 2001 offer of Palestinian statehood. But he blamed Palestinian National Authority President Yasir Arafat for turning down this offer.

Dershowitz placed most of the blame on the Palestinian leadership, calling Yasir Arafat “the worst leader a people could possibly have.”

But he also emphasized that the Palestinian people bear responsibility for supporting a regime that advocates terrorism, which he called “the tactic of choice that has been used by Palestinians since 1929.” Dershowitz challenged Palestinians to say “we have not been served” by the present regime.

Dershowitz lauded Israel for its commitment to democracy and the rule of law as well as for being the “only country in modern history not to bomb civilians in return for the bombing of its citizens.”

Dershowitz calls himself a “moderate advocate of the two-state solution.” He said that the end to the lingering conflict depended on Israel’s complete withdrawal from the Gaza Strip and most of the West Bank. In addition, he said that Jerusalem should be divided, with the Western Wall going to the Israel and the Temple Mount going to the Palestinian state.

Dershowitz said that negotiations can commence only when the “Palestinian leadership wants their own state more than they want the destruction of the Jewish, democratic state of Israel.”

Kennedy School of Government student Ushma Pandya said that Dershowitz’s speaking style was impressive. “I really enjoyed the fact that he stuck to his views and backed them up with facts,” Pandya said.

Abbas A. Kanji, a student at Harvard Business School, said he was taken by Dershowitz’s eloquence.

“I thought he was a really good speaker, strategic in the information he used to present his case,” Kanji said.

But Kanji, echoing the general tone of the question and answer period, expressed disappointment at what he perceived as Dershowitz’s insensitivity. He called Dershowitz’s language regarding the Palestinians “condescending” and “negative.”

“There is a disconnect in his method of presentation and what he says he’d like to happen,” Kanji said.