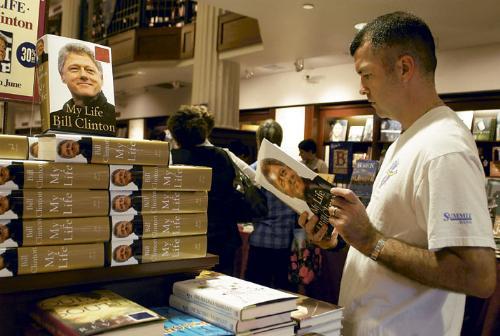 There are places Bill Clinton remembers in My Life—just not too well, according to Kennedy School of Government professor and Dunster House Master Roger B. Porter, who alleges that the former president fabricated a damning conversation between the two of them in his newly published memoir.

Recalling the impetus for his 1992 presidential campaign, Clinton writes that he was initially ambivalent towards seeking the office, but says that a call from Porter “showed what was wrong with [then-President George H. W. Bush’s] administration.”

According to Clinton’s book, Porter—then Bush’s Economic and Domestic Policy Adviser—said that while other potential Democratic opponents could be undermined through weaknesses grounded in their politics, the Arkansas governor was “different.”

“Here’s how Washington works,” Clinton quotes Porter as saying. “The press has to have somebody and we’re going to give them you...We’ll spend whatever we have to spend to get whoever we have to get to say whatever they have to say to take you out. And we’ll do it early.”

But the only conversation Porter can recall the two having came during President Bush’s 1989 Education Summit with the Governors, at which he joked with Clinton about how he ought to run for president in much the same fashion as Ronald Reagan—as a Republican.

Porter pointed to “tell-tale” signals within the purported dialogue as confirming his version of the account, singling out the use of the word “crap.” Clinton wrote that Porter broke off a policy conversation with “Cut the crap, Governor,” before the alleged threats.

Porter also dismissed claims that anyone in George H.W. Bush’s administration would make such a call, stating that discussions of smearing Clinton never took place during any of the meetings he attended or was aware of during his time at the White House.

“That was not President Bush’s style or that of those who worked for him,” Porter said.

Clinton’s allegations initially surfaced during his first term in office, when Washington Post reporter Bob Woodward learned of the account.

According to the White House Bulletin on June 23, 2004, provided by Porter to The Crimson, Woodward stated that he did not think Clinton’s assertion that it was Porter who made the threat was credible enough to be included in his 1994 book The Agenda, which he was then working on.

“[It] sounds like someone from the Sopranos,” Woodward told the Bulletin. “It’s an apocryphal story.”

And while Porter agreed that that is all Clinton’s version of the events amounts to, he was not quite so quick to dismiss its effects.

“In the prologue to his memoir [Clinton] talks about one of the desires of his youth was someday to write a great book,” Porter said. “He concludes with his evaluation: ‘As for the great book, who knows? It sure is a good story.’ Good stories, however, are better if they are grounded in facts.”

Despite what he perceives as his smearing, Porter said that the incident will not taint discussions of Clinton in his popular government course, “The American Presidency.”

“No, it won’t affect my treatment of President Clinton, but I am disappointed in him,” Porter said.

“Why he feels the need to just make stuff up escapes me,” he added.

Porter was not the only current Harvard faculty member to earn mention in Clinton’s book.

Kennedy School of Government professor David Gergen is described as urging Clinton to disclose documents about the Whitewater real estate scandal—advice which the former president, to his eventual chagrin, decided against.

“I was particularly gratified that he has recognized it could have saved him a very long and bruising confrontation and we never would have heard from Ken Starr or any of the other controversy,” Gergen told The Crimson yesterday.

Two former Secretaries of the Treasury—University President Lawrence H. Summers and his Treasury predecessor Robert E. Rubin ’60, currently a member of the Harvard Corporation—each garnered praise for their service on his Cabinet.

But while Clinton had uniformly kind words for Summers, he cited a few shortcomings in the range of his knowledge, most notably in the world of entertainment.

“Larry Summers, who knew everything about economics but little about popular culture, came into the Oval Office one day and remarked that he’d just had a meeting on debt relief with ‘some guy named Bono—just one name—dressed in jeans, a T-shirt, and big sunglasses,’” Clinton writes in the book.

According to Clinton, Summers nevertheless had nothing but praise for the man he didn’t know was the lead singer of U2.

“‘He came to see me about debt relief, and he knows what he’s talking about,’” Clinton quotes Summers as saying about Bono.

“I didn’t know Bono,” Summers admitted yesterday through a spokesperson. “I do now and my kids really love going backstage.”