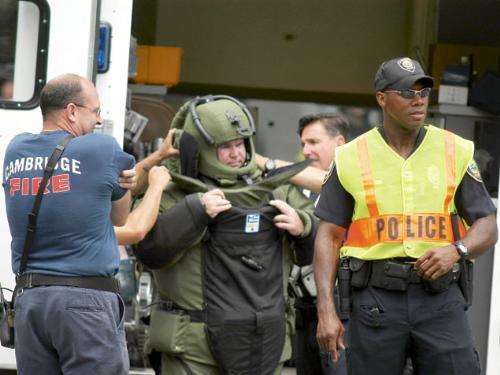 Members of Cambridge's emergency services prepare to handle a suspicious package found outside Finale at the Holyoke Center on Monday afternoon. They later determined the box was harmless.
By Alan J. Tabak, Crimson Staff Writer

The Harvard University Police Department (HUPD) and Cambridge Police Department (CPD) evacuated the first three floors of the Holyoke Center and cordoned off part of Mount Auburn Street in response to a report of a suspicious package at 10:15 a.m. this morning, CPD spokesperson Frank T. Pasquarello said.

Pasquarello said that the package turned out to be harmless.

“The package did not contain a bomb, nor bomb-making materials,” Pasquarello said. “But we take every threat seriously.”

The Holyoke Center—which houses a number of Harvard offices, including those of University Health Services (UHS)—and Mount Auburn Street were reopened at 1:20 p.m.

Doreen O’Connor, an accounting assistant at UHS, said she first noticed an unattended box on a table outside dessert restaurant Finale when she went outside on break this morning.

An unidentified male opened the box and removed an object that “looked like something electrical, like a cell phone or a beeper,” O’Connor said.

O’Connor added she was uncertain of the contents of the box.

O’Connor said the male then closed the box, explaining that he had hoped that there would have been money inside. O’Connor’s break partner then alerted Arthur Strauss, UHS’ manager of central services, to the presence of the box. Strauss said he called the police.

UHS Safety Warden Mac Howland said the police evacuated the levels of Holyoke Center up to the third floor because they feared that an explosion could have caused glass to fly from windows.

Jamie Fletcher, an accounts receivables supervisor who works on the 10th floor of Holyoke Center, was one of several bystanders expressing concern that only part of the building was evacuated.

“If they are taking [the threat] seriously, it’s scary that they didn’t evacuate everyone or tell people inside what’s going on,” Fletcher said.

Fletcher, who was on her lunch break when the police arrived, added, “I had to call my floor to explain why I wouldn’t be going back to work.”

But Pasquarello said the CPD believed evacuating all of Holyoke Center was unnecessary and would have caused needless disruption.

“We just wanted to play it safe and evacuate near where the package was,” Pasquarello said.

James G. Cacciola, a doctor at UHS, said he and most doctors would remain at work until all scheduled patients for the day were seen.

UHS Director David S. Rosenthal was at a conference at the time of the evacuation and was unavailable for comment, said his receptionist.

Cacciola said UHS was less busy than during the school year, but that elderly patients were likely inconvenienced by the bomb scare.

“We have a significant number of older patients that we try to fit in now because students aren’t here,” Cacciola said. “This is generally a less busy time, but the patients who do come in may be needier.”

“It’s quite inconvenient for the patients, isn’t it?” Cacciola added.

Arlene Lane, who works at UHS, said patients were not overlooked during the evacuation.

“We would never, ever leave a patient in an evacuated building. Patients come first,” Lane said.