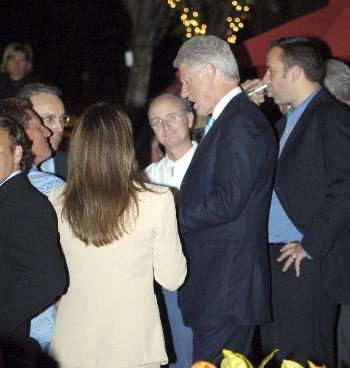 Hours after his address to the Democratic National Convention, Bill Clinton was back on the offensive, flatly dismissing allegations that his recently published autobiography included a fabricated account of a conversation with Kennedy School of Government professor Roger B. Porter.

In an exclusive interview in Cambridge early this morning, Clinton told The Crimson that Porter’s claims about the book, My Life, were simply “not true.” But, despite the hour, Porter wasted little time answering right back, sharpening his criticisms of Clinton’s account and expanding their scope.

Clinton had written in his memoir that Porter, who was Economic and Domestic Policy Adviser under President George H. W. Bush, had fired a warning shot at him.

“Here’s how Washington works,” Clinton quoted Porter as saying in My Life. “The press has to have somebody and we’re going to give them you...We’ll spend whatever we have to spend to get whoever we have to get to say whatever they have to say to take you out. And we’ll do it early.”

In June, after the autobiography was released, Porter said Clinton’s account was untrue, a charge the former president rebutted this morning.

But Porter scoffed when told of Clinton’s reply, noting that he would certainly remember so important an exchange.

“Why would anybody believe him?” Porter told The Crimson early this morning. “He is absolutely correct that I would not have forgotten a conversation like that, and that just buttresses my claim that such a conversation never took place.”

In his book, Clinton cited the exchange as one of the primary motivating factors behind his first presidential run in 1992. Though he was comfortably situated in Arkansas at the time and hesitant to abandon his position, Clinton wrote, a telephone call from Porter “showed what was wrong with [George H. W. Bush’s] administration.”

According to Clinton’s book, Porter—who is Dunster House Master and IBM professor of business and government—said that while other potential Democratic opponents could be undermined through weaknesses grounded in their politics, the Arkansas governor’s voting record made him “different.” According to Clinton, this also made him a prime candidate for a Republican-orchestrated smear campaign.

“Subsequent events sort of confirmed that,” Clinton said early this morning, referring to the scandals that plagued his second term of office. “When [the call] happened, I respected it, but I didn’t fold.”

Clinton cited conversations he had immediately after the phone call to support his version of the account.

“As soon as I hung up the phone, I called Hillary,” Clinton said this morning, “and then I called Mack McLarty,” his future chief of staff.

But Porter told The Crimson in June that the only conversation he can recall with the Arkansas governor came during President Bush’s 1989 Education Summit with the Governors, where he joked with Clinton about how the rising politician ought to run for president in much the same fashion as Ronald Reagan—as a Republican.

Porter pointed to “tell-tale” signals within the purported dialogue as confirming his version of the account, singling out the use of the word “crap” in the account. Clinton wrote that Porter broke off a policy conversation with “Cut the crap, Governor,” before the alleged threat.

Porter also rejected the possibility that anyone in George H. W. Bush’s administration would make such a call, stating that discussions of character attacks on Clinton never took place during any of the meetings he attended or was aware of during his time at the White House.

“That was not President Bush’s style or that of those who worked for him,” Porter said in June.

“It gives me no particular pleasure to set the historical record straight,” he read this morning from a prepared statement. “I do so for two reasons. First, historians and scholars of the presidency deserve to base their judgments and assessments on facts. Bill Clinton was not propelled, as he claims, into running for president in 1992 in part because he was courageous in responding to threats he received from me or from anyone else. Second, our political system needs more trust and less cynicism...Fabricating stories does not contribute to building the trust that is so needed.”

Clinton’s allegations initially surfaced during his first term in office, when Washington Post reporter Bob Woodward learned of the account.

According to the June 23, 2004 edition of the White House Bulletin, provided by Porter to The Crimson, Woodward stated that he did not think Clinton’s assertion about Porter making the threat was credible enough to be included in his 1994 book The Agenda, which he was then working on.

“[It] sounds like someone from ‘The Sopranos,’” Woodward told the Bulletin. “It’s an apocryphal story.”

And while Porter agreed that is all Clinton’s version of the events amounts to, he was not quite so quick to dismiss its effects.

“I think he diminishes the office of the president, which I treasure, when he repeatedly lies,” said Porter this morning. “And I think he ought to be ashamed of himself.”

Clinton accused Porter of deviating from his initial account of what had transpired, claiming that his version had evolved from a difference over details to a flat-out denial.

“When they first asked Roger Porter about it, he didn’t say it didn’t happen,” Clinton said this morning. “He just said, ‘It didn’t happen that way.’”

But according to Porter, who was first confronted with the charges by Woodward, his story has remained the same over the course of a decade.

“He’s lying,” Porter said this morning. “I have never changed my account of this one whit.”

According to Clinton, neither he nor Porter has attempted to contact the other since the purported incident.

“I never heard from or saw Roger Porter again until he attended a reception for White House Fellows when I was President,” Clinton wrote. “I wonder if he ever thinks about that phone call and whether it influenced my decision.”

Clinton reiterated this morning that neither he nor Porter has contacted the other since the incident, prompting chuckles from his supposed antagonist.

“I talked to him the day before his book came out,” Porter said this morning. “I had a brief conversation with him at the White House portrait ceremony,” on June 14, 2004.

Neither Clinton nor Porter would speculate as to the other’s motives in falsifying his account.