Existential Moments at the DNC 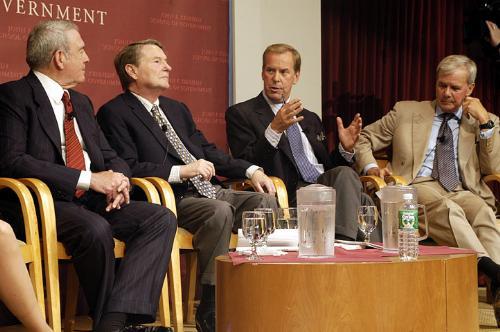 BOSTON, Tuesday, July 27—It was Tuesday night, and Teresa Heinz Kerry was addressing an enthusiastic audience in the FleetCenter, describing hardships encountered during her youth in Mozambique, “growing up in a dictatorship.” Oddly, she forgot to mention that she escaped that very dictatorship by going to Geneva for graduate school.

With her exotic south African accent, Heinz Kerry addressed the crowd in her five languages, explaining that she has come to cherish her own “right to speak [her] mind, to have a voice, to be what some have called ‘opinionated’...but instead of being labeled opinionated, will be called smart or well-informed, just as men are.”

And in one corner of the convention floor, another “opinionated” woman began speaking her mind.

A woman dressed head to toe in pink (complete with slippers), a member of Code Pink, a liberal women’s group based in San Francisco that protests against the war in Iraq, interrupted the speech, chanting, “What about the war, Teresa? What about the war?”

Not noticing the interruption, Heinz Kerry continued, lauding all “the women of this world, whose wise voices for much too long have been excluded and discounted.” She told the audience that it was “time for the world to hear women’s voices, in full and at last.”

And the Code Pink woman’s chants could be heard. Just not very well.

The press still instantly mobbed her—could this be The Story of the news-less convention?—and made enough noise to cause a minor commotion. Spontaneity at the DNC is that hard to find.

Security pounced on the woman (who, by the way, was wearing a coveted “red” press credential, which allowed her access to the floor), dragging her off the floor to the backstage area before she had a chance to finish her chant.

So much for the Democratic party’s loyalty to free speech.

The woman, and her cloth banner that read “Democrats for Free Peace,” disappeared into the backstage area, while the press—a smattering of rookie New York Times and Washington Post reporters looking for a scoop, local newscasters, and photographers—trailed behind, shouting questions in her direction.

Rumors quickly began—that they were going to arrest the woman, that they had stripped her and were interrogating her in the backstage area—but the excitement died in minutes. Reporters who were scribbling furiously one moment stuffed their notebooks back into their bags and returned to the convention floor, hoping to catch Teresa’s final words about restoring “faith in America.”

It was democracy at its worst. A speaker on stage, spouting ideals that were repudiated by what was enacted in front of her. And a media, so hungry for spontaneity and authenticity that it causes more commotion than the interruption.

The convention itself is a little bit like that. Quick moments of excitement, followed by disappointing, drawn-out periods of choreographed ritual and meticulously planned ceremony.

But the question remains: Why are 15,000 journalists in town for an event that is nearly completely scripted?

Certainly, the days of gavel-to-gavel coverage of the convention by television media are gone, reduced to a mere three hours. Heinz Kerry’s speech didn’t even make it onto prime time. And while the television networks opting to cut back convention coverage in favor of airing more “American Idol” episodes might fare better in terms of viewer numbers, they too are depriving Americans of an opportunity.

In his detailed account of the McGovern-Nixon race, Fear and Loathing: On the Campaign Trail ’72, Hunter S. Thompson wrote that the 1972 Democratic Convention in Miami was “shaping up very fast these days as one of the most brutal and degrading animal acts of our time.”

And maybe his words apply today.

With journalists at the convention outnumbering delegates by a three-to-one ratio, I expected this to be the event of the year. I expected the hordes of press to track down leads, sniff out scandals and uncover dirt. And if all that didn’t work out, I expected to get educated on “the issues.” I expected to learn something about the real John Kerry.

But if anything, I learned that the whole convention—with its 15,000 journalists along for the ride—is just entertainment, a show for the masses.

The average citizen is barricaded from the convention, separated by snipers, secret service and color-coded credential passes. Think of the irony that the Democratic convention is closed to the public—but open to the media. And for the media there are six different colored press passes—like six different social stratifications.

As a notable Harvard alum, T. S. Eliot, Class of 1910, once wrote in a context wildly different from the one in which I quote him here, “Between the idea / And the reality / Between the motion / And the act / Falls the Shadow.”

This “shadow,” the gray area that exists between intention and act, the place where we hope the real John Kerry and the party’s real goals exist, cannot be seen during the three hours the convention got on network television this week. And it cannot be gleaned from the pull-out sections that the national newspapers have run all week. In fact, the Democratic party has taken every possible measure to ensure the elimination of this “shadow” from its convention, working to choreograph every moment of the image it has presented all week—its own carefully constructed page of American history.

Instead of running another story about how bloggers are revolutionizing the convention, the national media should focus on why the convention needs to be reinvented.

Everything democracy stands for is violated by the current convention, and it’s time for the party to listen to its citizens, to invite some of them to let their voices be heard. The DNC opened its doors to the nations’ media—constructing a tent from which they could file stories, setting up wireless connections for bloggers—and it is high time that they let the nation’s citizens participate too.

—Staff writer Lauren A.E. Schuker can be reached at schuker@fas.harvard.edu.